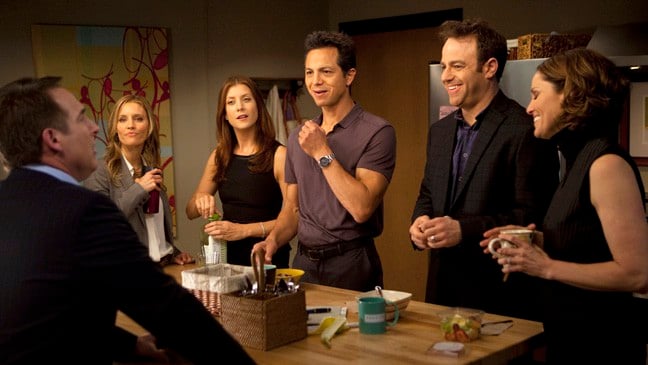 Debuting in 2007, Private Practice was the first spin-off series in the Grey’s Anatomy universe. The series followed a group of doctors working at a private practice in Seattle. Despite being part of the Grey’s family, Private Practice quickly took on an identity of its own. The show was interesting and fun to watch and it also featured an awesome cast. Unfortunately, however, it wasn’t blessed with the same kind of longevity as the flagship series, and it was canceled after six seasons. In the years since Private Practice has gone off the air, some of the cast members have gone on to have stellar careers while others have been a bit less active. Keep reading to find out what happened to the cast of Private Practice.

In her role as Addison Montgomery, Kate Walsh was the primary star of Private Practice and she was also the link between the show and Grey’s Anatomy. Due to her fearlessness and intelligence, Addison quickly became a fan favorite and she was the only character who had a main role throughout the show’s entire run. Although Kate had been acting for several years before being cast in Private Practice, the series really helped to elevate her career. In the years after the show’s end, she has continued to work consistently and her resume includes some impressive credits. Some of her most notable recent credits include 13 Reasons Why, Emily in Paris, and The Umbrella Academy. Fans will also be excited to know that she will be reprising her role as Dr. Addison Montgomery in season 18 of Grey’s Anatomy.

Tim Daly had already been in the entertainment industry for more than 30 years when he was cast as Pete Wilder in Private Practice. As a veteran in the business, he brought something very special to the role. Unlike the other doctors on the show, Pete was focused on holistic remedies and he always brought an interesting perspective to the office. Outside of work, he also had some interesting storylines including a relationship with Dr. Montgomery. This after Private Practice have gone very well for Tim. From 2014 to 2019, he played Henry McCord in the TV series Madam Secretary. He is currently working on a TV series called The Game which is set to be released at some point in 2021.

Unless you were a serious fan of Private Practice, you have missed Merrin Dungey’s time as a cast member. She played Naomi Bennett in the backdoor pilot of the series which aired as an episode of Grey’s Anatomy. However, by the time the first season premiered, she had been replaced by Audra McDonald. An official reason for the replacement was never given, but according to Variety, “it was partly a chemistry thing between Dungey and Taye Diggs, who plays Naomi’s estranged husband Sam, and that some were having trouble buying them ever having been a couple.” Although losing the role was probably devastating to Merrin at the time, things have turned out just fine for her and her career. She has been in several successful shows over the years including The Resident, Big Little Lies, and The Fix.

As one of the founding physicians of Oceanside Wellness Center, Naomi Bennett was the kind of woman who always knew exactly how to take care of business. That is something that Audra McDonald displayed perfectly in her portrayal of the character. However, Naomi wasn’t only focused on business, she was also a great mother and a reliable friend. Many fans were shocked when Audra left the show after season four, but she explained that it was a personal choice so that she could spend more time with her family. Fortunately for fans, she briefly returned for the finale. A lot of great things have happened for Audra in the post Private Practice days. She has continued to land impressive on-screen opportunities including roles in The Good Fight and The Gilded Age. She has also done a good amount of voice acting.

As Oceanview Wellness Center’s in-house pediatrician, Cooper Freedman was an upbeat and likable character. Despite being successful in his career, Cooper dealt with some personal struggles throughout the season. Paul’s portrayal of Cooper earned him a lot of attention has likely played a role in all of the success he’s had in the years since. Paul’s career has been very successful after Private Practice. He’s had regular roles in shows such as Prison Break, Girlfriends’ Guide to Divorce, and I Feel Bad. Paul also has a few upcoming projects in the works.

KaDee Strickland’s character, Charlotte King, didn’t have the easiest upbringing but she was always determined to make something of herself. However, she never lost her edge, and that was something that sometimes made her difficult for the other characters to like. She was the founder of Pacific Wellness Clinic which was a direct competitor of the office where the rest of the cast worked. Even though she went through some ups and downs throughout the series, Charlotte got her happy ending when she and Cooper tied the knot. Unlike many of the other stars of Private Practice, KaDee’s acting career slowed down a bit. She has only had a few other roles after the show, and her most recent on-screen appearance was in 2019. We weren’t able to find any information on why she hasn’t been as active, but there’s a chance she may just be using this time as an opportunity to be with her family.

Chris Lowell’s character, Dell, was one of the few people on the show who wasn’t a medical professional – at least not at the beginning of the show. At the start of the series, he was the receptionist at Oceanside Wellness Center, but he eventually went on to become a nurse. Sadly, Dell’s character was written off after the third season. Chris has been working consistently in the years after Private Practice and his resume is looking pretty impressive. In addition to TV roles, he has also done a good amount of work on the big screen. He will also have a role in the upcoming TV series How I Met Your Father.

Taye Diggs was already a star by the time Private Practice came around. However, he was most widely known for his movie roles. Through his portrayal of Sam Bennett, he reminded viewers just how versatile his acting skills are. Since Taye Diggs is still a well-known figure in the entertainment industry, there isn’t much mystery surrounding what he’s been up to since Private Practice. Since 2018, he has played coach Billy Baker in the popular high school football drama All American.

Throughout Private Practice’s run, Amy Brenneman’s character, Violet Turner, went through more than her fair share of challenging times. Not only did she lose a child, but she almost lost her life as well. On top of that, her husband, Pete, passed away. But even with all of the things she went through, Violet somehow always found a way to persevere. In recent years, Amy has remained a part of the entertainment industry. She has had significant roles in shows like Tell Me Your Secrets and The Leftovers. She is also working on two TV projects that will likely premiere in 2022.

Brian Benben is one of the few main characters who wasn’t a part of the show since the first season. He joined the cast with a recurring role in season two and was a main cast member for the last three seasons. Unfortunately for Brian’s fans, they haven’t seen much of him since Private Practice. Although he had a few roles here and there, it’s been about two years since he’s made an on-screen appearance.

Caterina Scorsone is only on this list by default because anyone who is even remotely familiar with Private Practice and/or knows exactly what she has been up to. In her role as Dr. Amelia Shepherd. Scorsone has been a main cast member since season 11.

Benjamin Bratt was the last main cast member to join the show. He began as a guest start during season four and was upgraded to a main character for the show’s final two seasons. He was a fertility specialist who was known for being at the top of his game. If you watch a decent amount of TV then chances are you’ve seen Benjamin at least once or twice in recent years. He has been on shows such as Star and Modern Family and he has also appeared in several films. He will also be in an upcoming mini-series called DMZ which will premiere some time before the end of 2021.

Mason Warner was the last major character to join the series. Played by Griffin Gluck, Mason was Cooper’s son who came to went to live with his father after his mother she fell ill from cancer. While it’s no secret that being a kid in the entertainment industry can be very challenging, Griffin has managed to successfully avoid the child star curse. He has had a very successful acting career and you’ve probably seen him in shows like Red Band Society and Locke & Key.