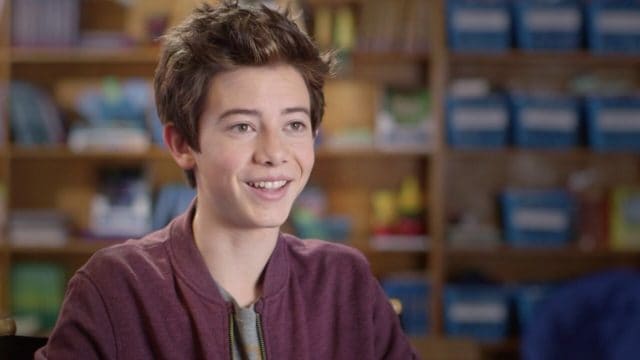 Griffin Gluck is an actor who is known for is role as Mason Warner on “Private Practice,” and Charlie in “Red Band Society.” You may also recognize him for his part in “Middle School: The Worst Years of My Life.” The young actor is an American who was born in 2000 and at the tender age of 16, he has done fairly well in his career in the industry. He’s considered to be an up and coming star and here are five things you didn’t know about him.

He was born Griffin Alexander Gluck on August 24, 2000, in Los Angeles. His parents are Cellin Gluck and Karin Beck. He also has a sister named Caroline Paris Gluck. His father calls him the nickname Gumanchu,which is his Japanese name. He is five feet and two inches tall for those of you who were wondering.

Griffin doesn’t have dental problems that you could notice, so he must brush and floss religiously. We say this because he disclosed that his favorite candy is Gobstoppers. This makes you wonder if he is a fan of “Willie Wonka and the Chocolate Factory,” but he hasn’t shared this secret if he is. Hey, who doesn’t like Gobstoppers? Never mind the fact that they tend to stick in between your teeth.

Nearly every actor has a role that they wish that they could play. Some of them have already done it, but Griffin is still dreaming and hoping. In Hollywood, anything is possible. His wish is simple and it has a good likelihood of coming true in his lifetime. He would like to play any role that Leonardo DiCaprio held when he was a younger actor.

4. He does have a bad habit

When Griffin was asked what his worst habit is, he disclosed that there is one thing that he is aware of. He chews his fingernails. It is something that everybody in the family gives him a rough time about. They are just reminding him to stop, so in a way, they’re trying to help him lose the bad habit. Well, Griffin, if this is your worst habit, then you must be a pretty good kid. We could think of a lot worse.

5. He has a strange fear

Let’s face it, we all have something that we’re afraid of and Griffin Gluck is no different. While some people are afraid of clowns, or riding on airplanes, Griffins is a little more off of the beaten path. You wouldn’t be able to guess what it is unless he had shared it, which is exactly what he did. He is afraid that he will fall down when he walks up the stairs. While this may sound a bit humorous, it really is not. His greatest fear is that he will take a face plant on the stairs. This isn’t just an occasional thought that flits through his mind. It is something that concerns him every single time he walks up a flight of stairs.