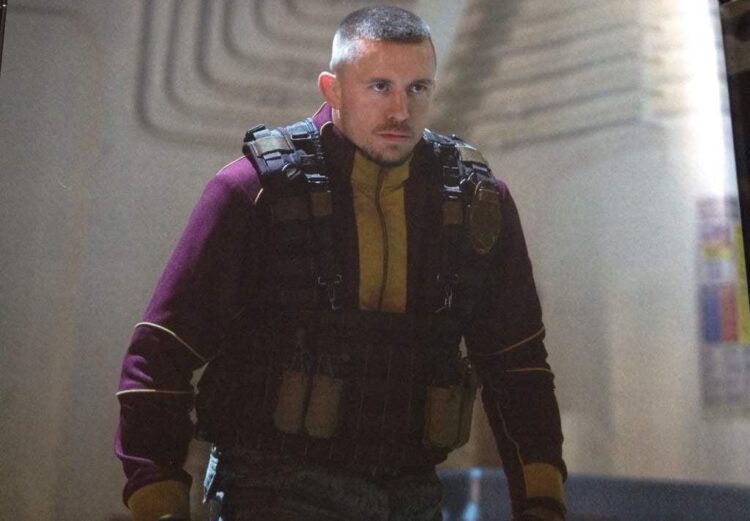 For all you fans of mixed martial arts, you may never see UFC legend Georges St-Pierre return to the octagon. That’s okay, because the man has earned his status as one of the greatest mixed martial artist of all time. He’s probably THE greatest of all time and it’s hard to argue otherwise. His victory over Michael Bisping for the Middleweight championship in 2017 had to have been the best way to cap off his extraordinary career. After that, he seemingly retired and it was hard for us MMA fans to accept that. But then, we saw him grow his hair out, something we’ve never seen before and that pretty much sealed the deal. But just in case you’re not a fan of Marvel movies, you might want to know something about Rush. He’s very interested in being in movies.

During his little hiatus from the octagon, Georges St-Pierre took on his first notable movie role as a Captain America villain in 2014. Unless you want to count 2009’s Never Surrender where he did some fake fighting alongside some fellow former UFC champions. That included Quinton “Rampage” Jackson, B.J. Penn, and the great Anderson Silva. Quite the gathering of warriors, but Rush was the one who really elevated his career in movies. What better way to do that than to be a supporting villain in 2014’s Captain America: The Winter Soldier?

Yes, on top of beating UFC legends in their primes, George St-Pierre went toe-to-toe with Captain America. Another reason why you shouldn’t mess with Rush. His Marvel Cinematic Universe debut was brief, but he did make an impact. The character he played was minor Captain America villain Batroc the Leaper. If you’ve seen how this character looks in the comics, there is no way you would ever associate him with Rush. This villain looks about as corny as a character can possibly get, not to mention he looks like the mustache-twirling type. That’s probably because he has the pencil-thin mustache to do it with.

Now if there’s one thing we need to remember, it’s that Batroc the Leaper is a French mercenary who is a master of the French kickboxing art of Savate. Now Georges St-Pierre is no expert in Savate, but who cares? The man is still incredibly skilled in several other martial arts that earned him 26 wins in his MMA career. And let’s give credit where credit is due, he made his fight scene with Captain America look very authentic. I guess he has his Kyokushin Karate background to thank for that. Plus, Georges St-Pierre is French Canadian, so it does fit somewhat.

Now I just need to point out, Batroc the Leaper is often considered to be a B-list villain. However, he has crossed paths with several other heroes other than Captain America. The list includes Iron Fist, the Punisher, Hawkeye, and Deadpool. What else would you expect from a supervillain who’s primary “power” is basically martial arts? This villain looks silly, but his skillset speaks for itself.

After George St-Pierre played Batroc the Leaper in Captain America: The Winter Soldier, fans were eagerly waiting to see if he would reprise the role. He got the chance to play the villain once again in 2021 in the Falcon and the Winter Soldier series on Disney+. Again, his role in the series was rather minor, but whenever he popped up, he kicked some serious butt. Between taking on Sam Wilson when he was Falcon and the new Captain America, Batroc proved to be a serious thorn in the hero’s side.

But in the season finale, it seemed like his time as Batroc would be cut short. The French mercenary would take a bullet from Sharon Carter, A.K.A the Power Broker upon learning her identity. But hold on, we didn’t actually see a body after he was shot. Call me overly optimistic, but that speaks volumes to me. If you ask me, that implies Georges St-Pierre could be returning to the MCU in the near-future. In fact, the former UFC champion-turned actor is confident he’ll return to reprise his role.

During an interview with Sherdog, Rush made it clear that he believes Batroc isn’t dead. Does it really matter if he was shot? Not at all. Don’t forget what universe these characters are in. In a comic-centric universe where dead characters come back all the time, it’s not too hard to believe one character can survive a bullet. Plus, he’s being played by Georges St-Pierre. I don’t care what you say, there is no way Marvel can write off one of the MMA goats. You can’t kill Rush!

So let’s humor George St-Pierre and think about his MCU return. Where could his Batroc possibly make his next MCU appearance? I think the best place for that to happen would be the upcoming Thunderbolts movie. Batroc is a supporting and recurring villain in the MCU and he’s already a mercenary. Aside from his skillset, he has the ability to lead and avert multiple government agencies. He’s skillful, cunning, and not afraid to fight the best. That makes him a suitable candidate for the Thunderbolts. At the very least, he can be a minor adversary for the Thunderbolts to fight against. When the next season of Falcon and the Winter Soldier comes around, he should pop up. And this time, he’ll be back for revenge.

Those are just my predictions if George St-Pierre does return to play Batroc again. Let’s face it, he’ll probably never compete in MMA again. That’s okay, because now we get to see him do his thing in movies. If that means playing more comic book characters, then we’ll take it. And why should he stop at the MCU? The answer is he very well shouldn’t. We’ve seen his dedication to the MMA community and he can do the same for his movie career. I would personally love to see how his career can evolve beyond the MCU. Give him enough time with a good actin coach, and George St-Pierre can do a lot more than direct-to-video action movies. You know, much like many other former UFC superstars faired in the movie business.

I have a feeling that won’t be the case for George St-Pierre. I think we can all agree that one of the MMA goats deserves better. Personally, I do believe he’ll return to play Batroc. He was a good character to use for a supporting villain and he can do much more. Whether it’s for the Thunderbolts movie or the second season of Falcon and the Winter Soldier or both, I just have a feeling that won’t be last we see of Rush in the MCU. Heck, we know more fighter-type Marvel heroes are joining the MCU, so Batroc can fight any one of them.

What are your thoughts, Marvel fans? Do you think Georges St-Pierre will reprise his role as Batroc again? Speaking of which, we know Michael Bisping is taking on more movie roles, so just imagine if the two of them fought in a movie. Just a thought.