Home
Entertainment
News
What We Learned from The Trailer for “Star Wars: Visions” 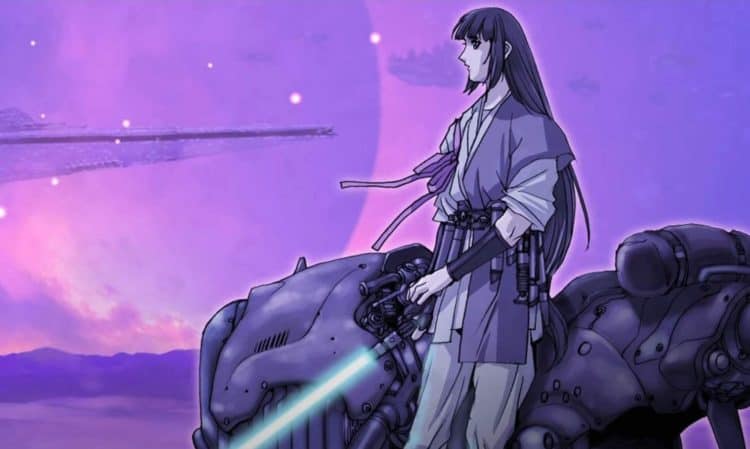 Star Wars is branching out from a cultural standpoint and quite honestly it makes sense considering that it’s a big galaxy and there are plenty of heroes and villains that might remain to be found. Visions will explore nine different short anime movies that will serve as an anthology to the Star Wars brand and introduce new characters while also making use of recognizable elements from the Star Wars universe that people will no doubt appreciate seeing. In the spirit of anime, things are going to get a bit crazy just going by the trailer, but in a way that a lot of fans will no doubt appreciate since lightsabers flashing, blasters spitting bolt after bolt, and such grand displays of the Force being used are going to blow people away no doubt. The Japanese influence on the Force and the Jedi and Sith, and in fact on the whole thing, is bound to create an effect that will have a lot of people back on their heels initially as their perception of Star Wars is bound to change for a moment before they can adjust.

But after that adjustment, it feels as though a lot of people will be ready to embrace Visions without fail as they dive into the story and become immersed in a culture that’s similar but just different enough to send the story soaring in a different direction than anyone might be able to predict. One thing I’ve stated since becoming a writer is that one way or another, the story will have to change at some point and head off in another direction, and this is what appears to be happening with Star Wars as the years go on and more and more people are able to get their hands on it. Different perspectives and different cultures will do with it what they can, and in the process will bring a new view to this time-honored tale.

It feels safe to say that some folks are going to be resistant to this and will cling to the idea of the ‘real trilogy’ that was created by George Lucas, as well as the prequels now since Lucas was in charge of those as well. But it’s amusing that so many people railed against the prequels and are now accepting them and ‘forgiving’ Hayden Christensen as they look upon the future of the franchise and where it’s going. How much longer will it be until they ‘forgive’ or accept what’s happening to the franchise now? It might not be until something else comes along to challenge their views, but it’s likely to happen since this appears to be a very common thread that pops up every time someone’s idea of what should be happening is challenged. Star Wars is and has always been a dynamic story that’s been best when it’s more open to embrace and accept changes that might come along. The added culture that Visions gives to the overall franchise is great since when one looks at it there have been hints and elements of Japanese culture in this franchise for a long time, but not on a grand scale.

It could be said that anyone resisting this change is simply not ready for what’s to come, but in all fairness, it might take a little time for people to fully acclimate to this idea, especially since the fact that while much of what’s seen in the trailer is already known thanks to the decades worth of imagery and knowledge that people have absorbed, there are still enough differences that need to be fully understood. The trailer has already given Visions a great look that a lot of people are no doubt excited for, and it’s fair to state that plenty of folks will be tuning in to see what it’s all about. One thing to say about it is don’t get your hopes up too much that you’ll recognize everything, since this looks like a new direction that’s been laid with many existing elements that will give a new feel to the story and thereby create something that won’t be fully recognized but will still come out as a great story that might have a lot of potential moving forward.

Star Wars hasn’t really changed a great deal over the years from a cultural standpoint, and any arguments to that fact might need to take a step back and realize that not only is this true, but that elements of other cultures have been used without exploring the direction that such uses might allow. Visions appears to be an immersive experience that will take the fans on a trip through the galaxy to places we haven’t seen yet, places we have seen, and tie them together in a convincing manner that will expand the Star Wars universe.