Home
Television
Get to Know the Cast of Escaping Polygamy 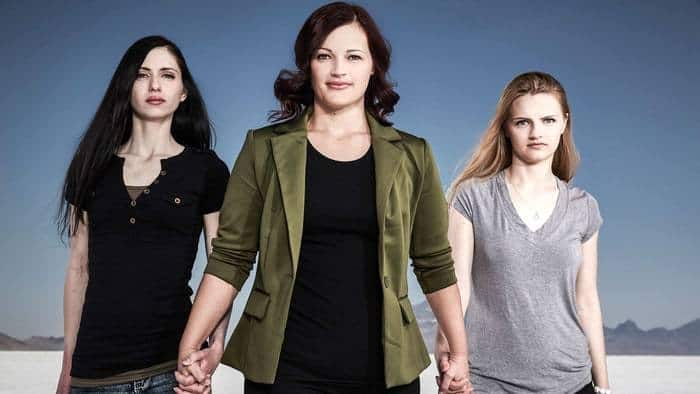 For those who are unfamiliar, Escaping Polygamy is a docu-series focused on three sisters who managed to make it out of the Kingston Group, which is one of the splinters that broke off of the Mormon Church when it abandoned the practice of polygamy in the 1920s. Since their successful escape, the three sisters are now dedicated to helping other women escape from similar circumstances from not just the Kingston Group but also other groups with similar practices. Suffice to say that this is much easier said than done, not least because a lot of these women experience considerable challenges once out because of their minimal experience with the outside world. However, considering the nature of the groups that these women were born into, each such success is something that merits celebration.

Before introducing the main cast members of Escaping Polygamy, it is worth saying something about the Kingston Group for the sake of providing context for their experiences. As stated earlier, the Kingston Group started up because the Mormon Church abandoned the practice of polygamy, which prompted a man named Charles W. Kingston to start preaching against the decision. Eventually, he was excommunicated, but not before he had managed to build up a following that went with him to Davis County, where his son Charles E. Kingston would eventually declare the existence of the so-called Davis County Cooperative Society.

Given that the Kingston Group was founded on polygamy, it should come as no surprise to learn that said practice remains rife in the modern community. Even worse, the Kingston Group has developed a disturbing belief that the bloodline can be “purified” through incestuous marriages in generation after generation, which has combined with the widespread practice of child marriages to make for a long list of horrors. On top of this, many of the wives as well as their children live in absolutely horrendous conditions as described by The Salt Lake Tribune, which is particularly egregious because the leaders of the Kingston Group are believed to control a collective fortune that can be measured in the millions.

In any case, the sisters are Andrea Brewer, Jessica Christensen, and Shanell DeRieux. In Touch Weekly has stated that both Andrea and Jessica are the daughters of Daniel Kingston with his sixth wife Heidi Mattingly Foster, while Shanell is the daughter of Daniel with his seventh wife Shirley Snow. Besides them, it is worth mentioning Shanell’s younger full sister Kollene Snow, who wasn’t a member of the initial main cast but went on to become involved in their shared effort.

Unfortunately, Shanell wasn’t as lucky. This is because when she was still at the age of 18, she was married off to one of her first cousins. Said individual proved to be abusive in both a physical sense and a verbal sense, which gave Shanell the conviction that she needed to get out. Something that culminated in not just her successful escape from her ex-husband but also the Kingston Group as a whole. Meanwhile, Kollene was married off to a second cousin instead. Their relationship wasn’t as bad as that of Shanell’s, but it soon came under some serious strain when his father told him that he had to get a second wife. Initially, Kollene attempted to convince her husband to come with her in her effort to leave the Kingston Group, but that fell through when he decided to stay with the group instead, with the result that Kollene escaped on her own.

Since the sisters have managed to make their way out of the Kingston Group, they have established new lives for themselves. For example, Andrea is interested in law, while Jessica is interested in social work. Likewise, Shanell seems to be very dedicated to her new family, while Kollene has become an esthetician. They have had to overcome a wide range of challenges in order to do so, in which they have been helped by people who were willing to extend a helping hand. For proof, look no further than the fact that both Andrea and Jessica winded up being adopted after they managed to get out of the Kingston Group. Never mind the key role that their aunt played in their successful escapes. For that matter, it is interesting to note that Shanell has received the full support of her mother, with whom she remains in contact.

As for the kinds of challenges that they have faced, it might be worthwhile to look at the list mentioned by Yolanda Barlow in conversation with Us Weekly. For those who are curious, Yolanda is another one of the women who have been featured on Escaping Polygamy, though in her case, she escaped from the FLDS rather than the Kingston Group. One excellent example of her stories is how she winded up swimming in the clothes that she wore on a daily basis because she simply wasn’t comfortable with a bathing suit. Another example is how finding a job turned out to be much more difficult than what she had been expecting because her social skills had suffered from an upbringing that had stressed not speaking with people outside of the group. Both challenges are often mentioned by women who have managed to make their way out of groups that practice polygamy, many of whom have managed to overcome them through their own effort as well as the support of others.