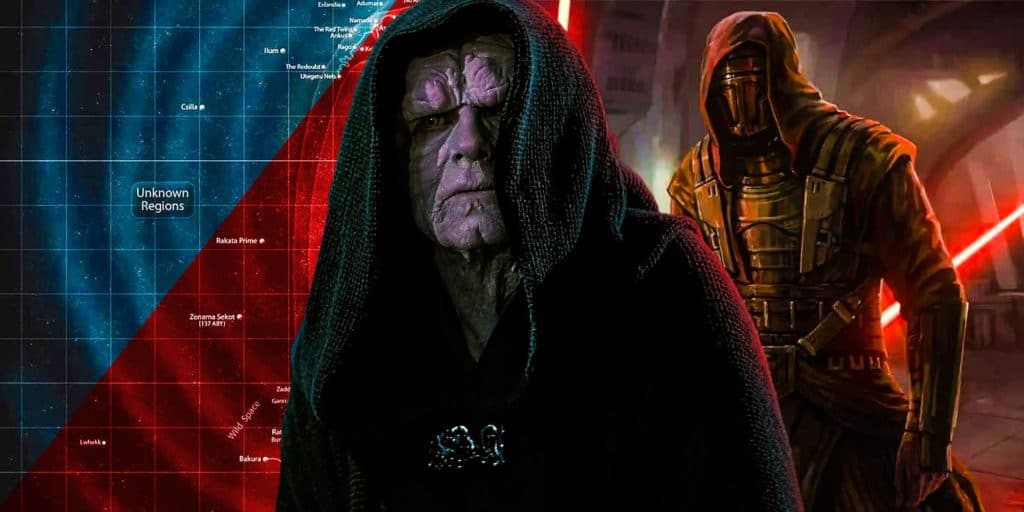 One thing that Disney is actually, genuinely, good at is making things bigger and widening the scope of a story no matter if it needs it or not, and the theory of Sith creating the Unknown Regions is one of the most expansive theories to date. Let’s get one thing clear, the Sith didn’t actually CREATE that extra part of the galaxy, since creation on that scale would be beyond every Sith that’s ever been or will be, especially with the idea that creation, aside from Darth Plagueis and any that followed his work, isn’t exactly the specialty of the Sith. But finding a way to divide the galaxy, as monumental as that might sound, is something that’s within the capability of the Sith, largely because much like the Empire and First Order that came after, the Sith were in the habit of creating massive weapons of such great and potential destruction that it’s said that several chained supernovas went off at once, creating such confusion and disorder that the hyperlanes that once connected what was known as the Chaos to the rest of the galaxy were cut off and changed so radically that they were never used again. The vast array of disturbances that were formed and stirred to life as a result of the supernovas created a definite barrier that only Force-sensitives could navigate, and even then only with certain tools that might help them navigate their way into and through the Unknown Regions, which was so named for a good reason since the ancient knowledge that had been all but lost was incomplete by design.

There are plenty that are already thinking that not only did the Sith do this, but they also did this on purpose for a slew of reasons. It could have been an attempt to destroy an enemy that was closing in, which feels like overkill, but to a Sith might make sense. Another reason though, one that makes a little more sense, is that the Sith needed a place to regroup, and as such saw no issue in creating the kind of destruction that would cut them off from their enemies and the galaxy beyond. It’s something that a Sith might do, and it’s an indication that we might hopefully be seeing various characters show up eventually if Disney decides to keep going back in time to establish just how ruthless the Sith really were, and how their ancient weaponry would make the Death Star and Starkiller Base look absolutely quaint by comparison. Think of a weapon that could cause a chain of supernovas, and then think of the two massive weapons we’ve seen to date. Starkiller Base definitely outstripped the Death Star, but it’s still fair to say that something that could separate one part of the galaxy from the rest with a well-timed explosion that would set off a chain reaction is something that even the First Order would be frightened of. There’s even a possible name for it that’s been revealed in a book by Timothy Zahn, who’s the reason why we’re talking about the Unknown Regions and why Disney decided that yet another part of the Legends canon was worth bringing up.

Darth Bane, Darth Revan, and the Chiss Ascendancy would be solid reasons to embrace the Unknown Regions since Rise of Skywalker already visited the region thanks to the existence of Exegol where Palpatine had set up his new army. Using the Unknown Regions to bring forth some of the most popular names in the franchise would be a huge idea for Star Wars, and it would no doubt give a much better chance to peer deeper into this part of space as more and more worlds would no doubt become known and the story would widen in a way that it hasn’t quite done yet. Adding in the danger and uncertainty of the Unknown Regions would be a great deal of fun, as it would be a chance to expand on the Jedi, the Sith, and their long and unending war that finally led up to the Skywalker saga at one point. At this point, delving into the past would be a lot more fun and a lot more sensible than trying to force a future onto the franchise that people might not be ready to see take shape. There’s a great deal of talk about continuing stories within the Star Wars franchise that have less to do with the Jedi and sith, but there are plenty of fans that are going to be hopeful to see this continuing war and how it might have started. There’s so much more room to bring the past of Star Wars into focus that it would be kind of ridiculous not to. Heck, it might even be a good idea to show what really happened to create the Unknown Regions.