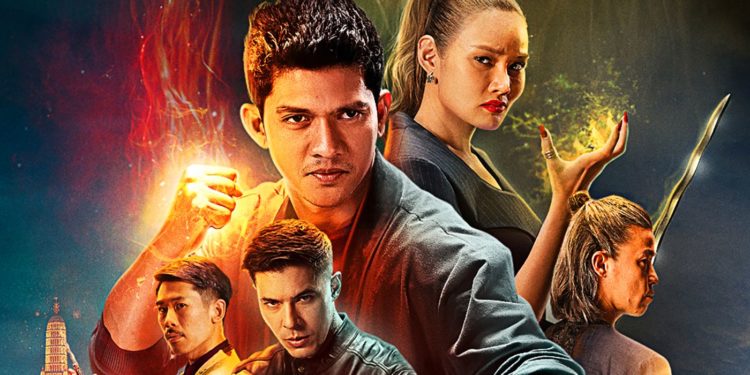 It’s fair to say that if one wants to understand this movie they should watch Wu Assassins on Netflix since it might make a lot more sense. Plus, after watching this movie it does appear that it might have been more of a culmination of the show since it features the characters that fans have grown used to, and puts them through an adventure that displays the power and skill that was set up in Wu Assassins. The action in the movie is adequate, but to be fair it plays out like one long show, as the dialogue and the acting, while solid, is still something that one might see in a direct-to-video movie. The fact that it stars a couple of very well-known and highly celebrated names is a big part of what keeps this movie from bombing out completely. It did earn mixed reviews, so it’s fair to state that people might have liked the movie for what it was, but there was nothing that really set it apart from a lot of other action movies, even with the supernatural aspect.

The choreography is impressive enough even if there are moments when it feels slightly predictable, and the dialogue is better suited for a TV show rather than a feature movie where people often tend to expect a lot more. But giving credit where it’s due, the fight scenes do manage to thrill the audience in several ways as the main characters aren’t seen to just mow through everyone without any real effort, as even Kai is put on his heels a couple of times by individuals that are just as skilled as he is, if not more so. Leaving the heroes at least a little vulnerable tends to increase the interest a bit sometimes since it gives the audience the impression that while the protagonists are impressive and fully capable, they’re still not supermen that are prone to wading through legions of villains.

But getting to the overall story and plot of this movie it does feel as though it can’t stand on its own without Wu Assassins simply because there’s so much information that needs to be absorbed before taking it all in. From the characters to their overall mission in life it’s more than a little evident that if the audience has watched what came before they would be secure in the knowledge of what’s going on. But even though the movie is good enough when it comes to the overall action and exposition that take place throughout, it’s still not capable of satisfying as many questions as audience members might have had when watching it from front to back. On the upside, it might inspire others to watch the tale that came before, though movies that have a seriously detailed backstory such as this one are bound to confuse and sometimes even irritate audience members that want to know everything right now and without having to backtrack and pick up hours and hours of explanation that will make sense of something they’ve just watched. Hey, some folks like that, and others, well, not so much.

It’s not exactly a desire to bash a movie, but plenty of those that have seen this movie are more than willing since the truth is that the acting isn’t all that great, and the fact that Lewis Tan headlined the latest Mortal Kombat movie is why he became such a big name in this movie. Iko Uwais, who’s been fun to watch for a while now thanks to the Raid movies and his other contributions to pop culture, still gets headlined, but at the same time, one has to wonder why he would be a part of this. Everyone’s got to work, and sometimes actors have to star in movies that are far beneath anything they’ve done before, and movies like this are the result. While the action is fun to watch in many regards, the acting is, well, kind of lackluster compared to a lot of what’s been done, and the story could use a lot of tweaking to make it better than what it turned out to be. Trying to build this story up is harder than anything since the desire to take this as a worthwhile story is there, but the execution falls short.

Action movies are a dime a dozen to be certain, and it takes a lot to make one more popular than the other. But to make a solid action movie takes more than just big stars and a lot of fight scenes. It takes a story that doesn’t feel as though it’s been put together in the same manner as a TV show, since that effect is pretty obvious, and like a lot of people would agree it doesn’t really work that often. To be fair, it’s not the worst action movie ever, but Fistful of Vengeance is something you might want to watch if you have the time and absolutely nothing else to do.