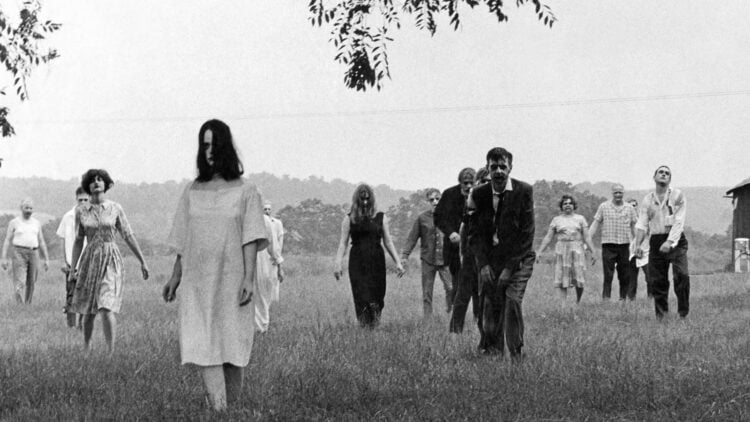 Horror cinema has always found a way to integrate themes of dread, despair, sociocultural and sociopolitical anxieties, and themes of existential malaise in the viewers who immerse themselves in it. George A. Romero’s “Living Dead Quartet” consisting of Night of the Living Dead (1968), Dawn of the Dead (1978), Day of the Dead (1985), and Land of the Dead (2005) contrasted the horror tropes of flesh-eating zombies rising from the dead to eat humans with the social and political themes of each respective decade of their release. Through historical, scientific, and social lenses, viewing these four films allow for a tangible and intriguing analysis to form that explores how these horror films have left an imprint on the collective imagination. An imprint that manages to thoroughly achieve the goals of horror cinema while also probing how the themes within each movie metaphorically examine each decade’s real anxieties outside of a fantastical premise. George A. Romero’s zombie films have influenced our modern society with the rise of zombie fandom due to their ability to explore contemporary anxieties in tandem with the enjoyment and thrill of watching horror cinema for a popular culture experience that provides entertainment with thought-provoking subtext. Let’s break this down.

When assessing The Living Dead Quartet’s relationship to the natural and applied sciences, a dark, yet introspective context emerges about the human experience: the decay of the body and the disintegration of the mind. These films feature human beings who have risen from the dead with a mindless, primal hunger for devouring living human flesh at any cost. The premise is certainly fantastical, but there are deep-rooted metaphors about zombies within the human condition. The biological decay of the human body, through both the aging process and decomposition post-death, is frequently an unpleasant fact of life. In a dark twist of fictional narrative techniques, zombies represent a horrific social commentary on our own mortality. According to Eugene Thacker, “The same effective principle that is life-giving is also life-destroying, not through negation, but rather through an excess that is part and parcel of that life principle”. The biological decay of the human body is bad enough, but the zombies of Romero’s films are not only dead and decaying, they are also walking the earth with the sole intent of devouring the living. This theme is also contrasted with the scientific process in Day of the Dead, which finds a scientist working to teach the rabid zombies how to recall some of their sensory dispositions from when they were alive. Romero seems to be suggesting that our thirst for never-ending scientific breakthroughs reaches far beyond simple life and death, but rather to a realm of a superhuman scientific superiority that is virtually impossible to achieve.

Science is an all-consuming study of the natural and celestial world. An astute observation of the scientific process in The Living Dead Quartet is that the bonds that determine the finality of life and death have been one theme within science that has no answer or solvable equation. The zombies are reanimated and have only one mission in the films: to eat and destroy the living. Romero’s human protagonists and antagonists are not immune to the thirst for human flesh exhibited by the zombies. This serves as a metaphor for the unanswerable riddles within science that concern what it means to be alive and why death has to be so final. Additionally, Romero offers metaphors for the elusive scientific processes of trying to determine what creates and dictates good and evil in the human experience. According to an early review of NOTLD, “The suggestion is that civilization is a flimsy screen that we employ to hide from ourselves the brutal truth of humanity’s innate villainy”. Even in death, human beings are not immune from the push and pull factors that define good and evil in the human dynamic. The zombies are decaying before our very eyes and are only driven by the need to destroy and consume living beings.

Science constitutes a large, underlying subtext of The Living Dead Quartet. Romero never pulls his camera away from the searingly intense and disturbing disembowelments that occurs when the zombies capture a human victim. Innards, blood, guts, and every very real and often not thought about biological process within the human body is shown being ripped apart and devoured as nourishment and meat for the zombies. In our most primitive state, we are all sentient animals that exist no differently in the context of survival of the fittest. Our own scientific processes serve as a backdrop in Day of the Dead, which sees the survivors living in an underground nuclear fallout shelter. The sphere of human creativity is powerful, but the possible repercussions of our scientific achievements, such as the nuclear weapon, can often find us hovering for protection due to our own mortal and fragile biological systems. Romero’s films view science and the human endeavors of scientific exploration as cautionary tales. It is always proactive and beneficial to celebrate our continued advances in making sense of the natural world, but we often lose sight that we are also still an existing and fragile species within the world as well.

Romero’s films shine the brightest when analyzed with the context of the social sciences. Each film offers a unique and important social theme set against the backdrop of a zombie apocalypse. Rather exploring racism and the Vietnam War in Night of the Living Dead, or, the rise of rampant American consumerism in Dawn of the Dead, Romero manages to create entertaining and thrilling horror scenes that play as sociocultural examinations of the worst impulses of the American system since the 1960s. In Dawn of the Dead, the survivors of the zombie apocalypse take up refuge inside of a large shopping mall, which provides a commentary through metaphor for the lure and obsession with commerce and material possession within the American lexicon. The zombies are also drawn to the mall for reasons that can only be attributed to habit and past experiences based upon strong, overwhelming sensory self-gratification. The insatiable need to purchase, own, and consume has become so deeply ingrained in twentieth-century Americans that their reanimated corpses are relentlessly driven by the same instincts and needs. Consumerism became an acceptable vice in the latter part of the twentieth century, perhaps even as powerful of an insatiable desire as eating flesh has become for Romero’s zombies. Even amidst severe economic decline, inequality, worldwide genocide, homelessness, abuse, and murder–Americans find solace in turning away from societal problems instead of working to fix them, of which buying and consuming have become an acceptable drug to cover the guilt.

Similarly, Night of the Living Dead and Day of the Dead explores pioneering aspects of race and gender in the horror film genre . The heroes of these two films are an African American man and a woman respectively, who represent the struggle and unyielding stoicism and courage to continue fighting against this system in the last half of the twentieth century. Land of the Dead is set in 2005 America, during the new push of immigration fears that still persist as a negative narrative in American politics at the dawn of the 2020s. In addition to exploring immigration-themed bigotry among the antagonists of the film, Romero also explores how certain sects of society have been made invisible to the elitist nature of American prosperity. An undead gardener aimlessly pushes a lawnmower in circles in the middle of the street at midnight, and so on. These are lost souls who no longer fit into the commodity-producing scheme of things. In many cases, these archetypes, although zombies, emerge as victors against the antagonists of this film, showing that karmic retribution and retaliation for evil deeds and viewpoints can be checked in due time.

The Living Dead Quartet produces a richly-layered and complex deeper understanding of American society over the course of forty-plus years. Romero took a brave and unique step in creating horror-themed entertainment that also probes the deeper issues with systemic American issues that affect lives every day. Even the zombies represent many different social dynamics within American society, the main being the ravenous decay of human decency and compassion in a rapidly-advancing American narrative that finds individual self-gratification as the nexus of existence. Social science explores how all of the various cultures and diversity within society operate as a large social dynamic. George A. Romero understood that society has deep-rooted problems that frequently gets brushed aside in favor of more artificial and frivolous narratives, such as shopping and hoarding wealth. The Living Dead Quartet is not interested in promulgating this artifice and seeks to expose the horrid side of human nature for the hopes of a better future.