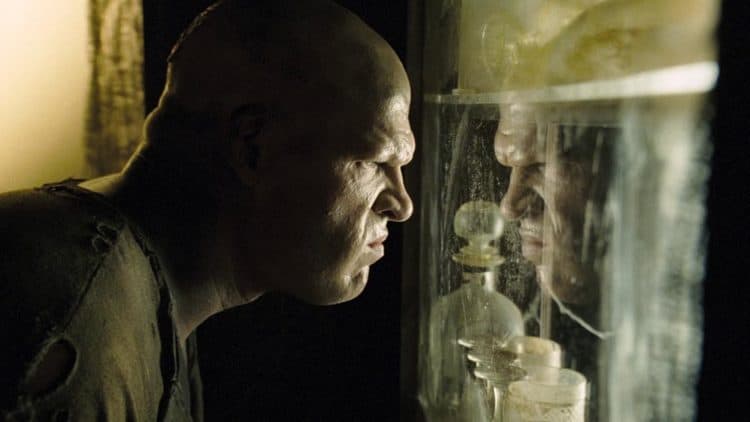 It’s not surprising that every now and then that a new horror franchise tries to start in a popular genre that’s crowded with icons such as Michael Myers, Freddy Krueger, or Ghostface. That was the case with WWE Studios, See No Evil, starring former World Heavyweight Champion Kane (Glen Jacobs). On WWE programming, Kane is a popular fictionalized monster who’s billed as being seven feet tall. With the wrestling promotion trying to branch out in the media world, it’s only natural to tap into the popular aspects of the company’s property and try to capitalize on it; however, the issue is that when you peel back the layers of See No Evil then you understand why the film ultimately bombed when it was released in May 2006.

Seen No Evil centers on the monster Kane terrorizing a group of pretty young adults who are tasked with trying to clean up a rotting hotel due to their community service. However, when one of the criminals is kidnapped, the group must find a way to kill the murderous brute. Upon release, the film wasn’t exactly a critic darling, receiving an abysmal 9% after 50 plus reviews. Even worse, the horror film barely made a splash at the box office, only making $15 million in its total run. Luckily, it wasn’t a big loss since horror films tend to be made for cheap, and See No Evil was no exception because the 2006 feature’s production budget was only $8 million. Eight years later, a straight-to-DVD sequel was made by the directors of American Mary and it received a better rotten tomatoes score based on five reviews; however, See No Evil 2 was virtually ignored and the franchise has been dead ever since. So, why was the See No Evil franchise unable to take off? Let’s dive deeper into the situation.

See No Evil Failed to Separate Itself from Other Horror Franchises

When you go back to the first film, See No Evil is a teen slasher movie that failed to do anything new or creative with the formula. Pretty young people who happen to be dumb as rocks? Check. Unnecessary sex because boners are stronger than common sense? Check. A generic and unstoppable villain who could pass off as the cousin of Leatherface? Check. Even though this film came out in 2006, the tropes of the teen slasher genre were beyond stale at the time. Halloween became such a success because it was a film that came out when slashers were barely existent. Plus, the film was actually pretty damn good. Halloween isn’t a masterclass on character development, but it’s a simple premise that John Carpenter manages to effectively generate suspense and scares from thanks to a terrifying villain. If the first Halloween came out in 2006, then the movie wouldn’t have the same impact as it did when it first arrived in 1978. See No Evil was a predictable slog that audiences saw right through instantly. In terms of the sequel, that film is indefinitely better and it has some sweet kills attached to it; however, the film failed to break through like Trick ‘r Treat because the villain itself is nothing special. Kane/Glen Jacobs does a great job with the role that he’s given. He’s given some depth with his character, and the former WWE World Heavyweight Champion is an imposing force, but as I previously mentioned, he doesn’t stand out in a genre full of murderous brutes.

The horror genre desperately needed something new. The torture porn craze that Saw started back in 2004 was wearing thin. Plus, it never truly reshaped the genre as a whole. Modern horror has taken a drastic turn thanks to the likes of Ari Aster, Jordan Peele, Robert Eggers, or James Wan. Sure, you’ll still get the eye-rolling teen slasher film here and there, but the genre as a whole is crafting better stories and characters. Of course, I highly doubt there was an expectation for See No Evil to be a gamechanger as the marketing for the film wasn’t in that direction; however, the point is that it needed to be something outlandish and fresh to capture audience’s attention. It also didn’t help that the movie came out during a usually busy summer season. The superhero madness wasn’t strong during this time; however, The Da Vinci Code was a hot commodity as this time. Couple that with the popular Mission Impossible series then it was hard for See No Evil to find an audience despite the demographics between the three movies being different. See No Evil failed at starting a franchise because there was nothing interesting about the world that audiences wanted to explore.