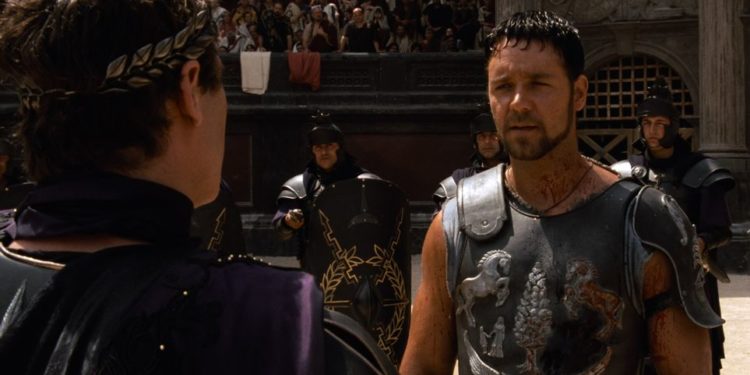 The iconic filmmaker is no stranger to violence as Ridley Scott hasn’t been shy about chopping off heads or bursting open a human chest. This article will focus on the best kills within a Ridley Scott film. That means that Scott had to be both the writer and director of the feature, so, unfortunately, there’s no love for Murder on the Orient Express here. Let’s get started with the first kill:

The Counselor – Westray Is Decapitated

Given the level of talent in front and behind the camera, The Counselor is ultimately a disappointing film. Still, that doesn’t mean that there aren’t effective moments in the feature, with the most notable being Brad Pitt‘s Westray. The film is a twisted narrative that focuses on the ins and outs of the drug cartel, with Pitt’s character being one of the central figures. In one of the highlights of the 2013 feature, Westray is walking along the sidewalk when two men blindside him: one of them puts a decapitating wire on his neck, while the other steals his briefcase. The stage of this moment is perfect as Pitt is fiercely struggling to get out of this tool until it cuts off his fingers and then his head. The scene was so gory that the full death wasn’t showcased in theaters. This highlights just how dangerous the drug cartel business is, and though this scene is more of an elaborate Saw trap, it still delivers the goods.

Denzel Washington stepped back into the villain role, but this time as Frank Lucas, one of the richest drug dealers on American soil. This moment was pivotal as it highlighted just how ruthless and bold the drug dealer is. Lucas’s Blue Magic heroin was selling like hotcakes, but Tango didn’t give Frank his percentage of the sales. In turn, Frank puts a gun to his head, and believable so, Tango doesn’t think Frank has the balls to shoot him in a crowd full of people. The moment subverts expectations as Frank pulls the trigger without even blinking. It was a truly shocking moment that established Frank’s character and set the course for the remainder of the film.

The moment that truly defines the Alien franchise. Despite coming out with numerous sequels and spin-offs of the brand, the most haunting and unsettling moment in the series is Kane’s chest bursting open. It all started with the facehugger grabbing onto the officer, but suddenly dying after implanting the chestburster into Kane. The sequence that pays off this moment is Kane twitching before one of those aliens bursts out of his chest. To get the best reaction from the cast as possible, Scott kept the scene very secretive from everyone aside from John Hurt (Kane). Their reaction to the bloody burst was genuine, with Yaphet Kotto (Parker) locking himself in his room following the gut-wrenching scene, according to the Guardian. It wasn’t just the fact that Alien came during a time when so few horror films of this nature existed, but it was a suspenseful and clever feature that didn’t resort to unnecessary blood and gore to make up for the lack of a decent story. No matter how many more Alien spin-offs that come out, this death just simply won’t be topped.

This moment was well-earned. Commodus, was the psychopathic brute who murdered his father and demanded the execution of Maximus. The role of Commodus was well written, with him displaying his frustration and rage due to the fact that he feels unappreciated, but his villainous nature is what ultimately makes him a deplorable human being. After he senselessly kills Maximus’s wife and son, the gladiator goes on a mission to get revenge for his dirty deeds. It isn’t exactly the kill itself that’s the highlight here, but the fact that such a despicable man gets what he deserves in the end. It was thrilling to see Maximus pierce his blade back into Commodus’s throat, especially after he cheated in order to get the advantage. Though Maximus ultimately dies, this emotionally satisfying moment is one of the best in cinema history.

In a tragically underrated film, Scott revisited the historical period and explored the misogyny during this time where Marguerite de Carrouges accuses Le Gris of rape. The film goes through a barrage of twists and turns before it gets to the climax where her husband fights Le Gris. The battle slowly builds up, with the duel growing ferocious with each knock down. Finally, Carrouges gets the upper hand by forcing Le Gris onto the ground. The accuser maintains his innocence, but it doesn’t matter because Jean pierces a knife through his former friend’s mouth and out the back of his head. Like Maximus killing Commodus, this moment was well earned, though it was more of a surprise here at how sudden Jacques death came. However, the aftermath was more effective as justice had won at the end of the day. The crowd was silent in shock, and the ones who stabbed Jean and Marguerite in the back had to deal with the sudden guilt of being on the wrong side. Strong storytelling all around that made this death scene memorable.