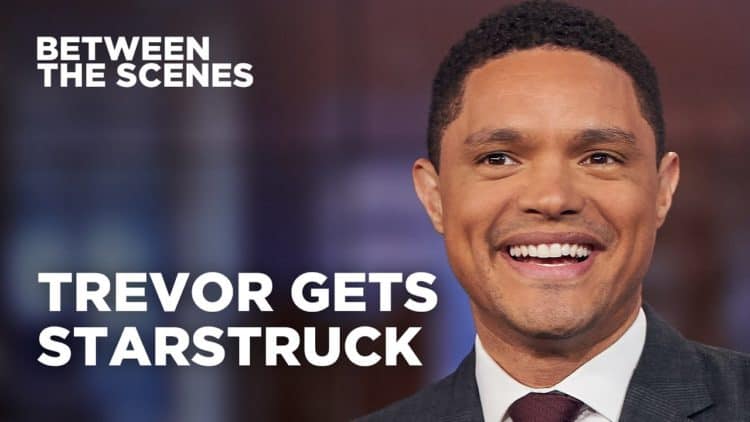 When Trevor Noah took over The Daily Show, most Americans were quite skeptical, and the question on everyone’s mind was, “ Who’s that?” It’s safe to say that those days are long gone, and Noah is a man who needs no introduction. He has built himself into a household name, and popularized political satire, thanks to former President Donald Trump, who gave him more content than he needed to make his show thrive. More popular than Noah’s jabs at former POTUS is his segment dubbed ‘Between the Scenes’ that has proven to be a hit with the fans. Here are some of Noah’s best stories yet:

1. The Time He Bumped Into Former POTUS, Barack Obama

Legend has it that, one time, Tech mogul Bill Gates was hosting a Goalkeepers event in NYC, and Noah was invited. After he’d given his talk, Noah had a presidential mishap. “ I get off stage and I’m waving at the crowd. I’m walking backward, moving to the backstage area and I crush into a person. As I crush into them, I see the eyes of people looking at me, and everyone is like ‘Oh! Sh** What have you done?’ and I’m like, ‘Come down, humans bump humans all the time.’ And I turn, and the person I bumped into was Barrack Obama.” Noah narrated. “ Watch where you walk!” Former POTUS said, to which Noah replied, “ Hey Man! I’m walking over here!” Noah got more stares than he could count, but he survived to tell the tale.

2. The Time He Revealed The Met Gala’s Little Secret

Back in 2019, Noah attended the Met Gala, and his designer’s interpretation of the theme was a t-shirt. When he got to the event, however, he said, “ This is my favorite thing about the Met Gala, no one actually knows what the thing is. Everyone goes like, ‘We’re here for the event and the theme, but imagine if everyone got invited to an event but with a different dress code.’” While Noah was flaunting his t-shirt amidst stares, he turned around to see Katy Perry wearing a hamburger.

3. The Time He Was Jay-Z’s Bodyguard

It’s not every day that you get to play bodyguard, especially to Jay-Z. So, when the moment presented itself, Noah welcomed it with open arms. At the NAACP Awards, Jay-Z happened to have a moment without security when the show ended abruptly. Almost immediately, a swarm of people rushed towards Jay-Z, prompting Noah to step in. Noah pushed Jay-Z through the crowd while yelling, “ We gotta move, people! We gotta move, people!” He had a run-in with the real bodyguards for a second but stayed undercover until Jay-Z was safe and sound through a secret exit.

Prior to becoming famous worldwide, Noah had already established a name for himself in his home country. So, when he visited South Africa after a long stay in the United States, one fan who worked at customs couldn’t hold it in. “ Trevor, when are you coming home?” she asked. Noah was baffled. “ I’m…I’m home.” He said, to which she replied, “ No! But when are you coming home?” Let’s just say that went on for a while.

5. The Time He Met The President

6. The Time Usher Challenged Him To A Dance

7. The Time He Discovered There Were Different Levels Of Fame

Oscars afterparties are cool events only the elite get to attend. Noah had the honor of being invited to one of those, and he encountered a level of fame he hadn’t anticipated. “ We are all standing in line. Everyone there has achieved something in some way. I’m standing there. It’s myself, it’s Terry Crews…we’ve done stuff. You know us! We’re moving forward, then they stop us like ‘Please move aside! Jennifer Lopez is coming through!’” Noah detailed.

8. The Time He Recalled His DJ Days

A look at Noah’s journey and you’ll know that he was once a DJ. Asked about his friends from his DJ days, Noah said, “ I know that Hitler still dances. If you haven’t read my book, I know how weird that sounds. Everyone’s got real jobs now. I don’t think anyone stayed in deejaying.” Noah however revealed that he missed his deejaying days, but understood how much everything had changed in the party scene.

9. The Time His Grandma Never Forgot

Noah’s grandmother is an integral part of his life. If you happen to have read his book, you know why. In her 90s, she makes Noah count both the years and the months.  His grandma likes to hang out with her granny squad, and her memory, Trevor says, is bulletproof. “ Her friends ask her about things they’ve forgotten about in life. Her friends would be like, ‘Where did I meet my husband?’ And she’d tell the stories.” Noah attributes her strong memory to her love for writing. “ To be 91, and still be able to read and write…Oh! I’m so blessed!” Noah’s grandma says.

Noah’s younger brothers are from his mum’s other marriage. Their skin tone is therefore different. One time, he was picking his 10-year-old brother from school when the young boy sighed deeply. Asked what was wrong, the 10-year-old said, “ Kids,” and sighed again. When Noah probed further, he learned that a schoolmate of his brother couldn’t believe they were brothers because of their difference in tone. “ What did you tell him?” Noah asked. “ I said people are like chocolates. You can have white chocolate, and you can have a dark chocolate. And you can have a milk chocolate. But it’s all Nestlé, okay?”