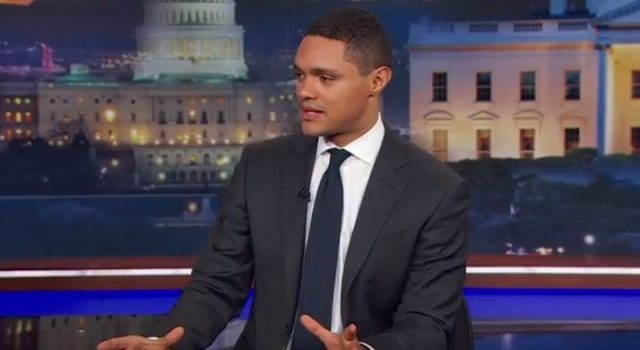 When Trevor Noah first took over The Daily Show he had some humongous shoes to fill when Jon Stewart departed.   I think I and most people will agree that his first couple of months were rocky at best.  He just didn’t seem that confident in front of the camera and I think he was really still trying to find his own voice.  It’s tough to do when you’re following one of the most successful hosts in the modern era.   But then something happened.  Donald Trump happened.

And as I’ve said about other late night shows, The Daily Show too has benefited from Trump’s rise to the White House.  However, with regards to Trevor Noah, it gave him a chance to start speaking the truth, his own opinion, and become “himself” on the show more often.  While I think that Noah still has a ways to go to get The Daily Show in peak condition, it’s safe to say he’s found a good comfort zone.

However, you won’t find a better Trevor Noah than when they cut to commercial and he’s talking to the audience without the cameras on.  In a “between the scenes” moment Trevor weighs in on how Paul Ryan tricked his fellow Republicans into thinking he had a health care plan to replace the Affordable Care Act.   And as you’ll see, this is the Trevor Noah we know and love: