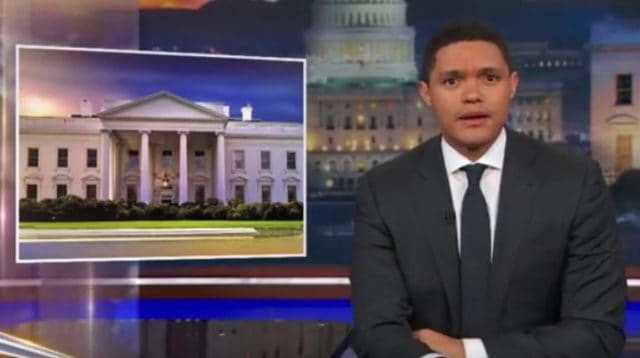 I’d like to extend a heartfelt apology to The Daily Show and Trevor Noah.  I feature just about every single late night show on this site and it’s been at least a month since I’ve put any segments from The Daily Show up here.    Going off track a bit here but I just want to say how much I think Trevor Noah has improved as host of The Daily Show.  When you’re stepping in for Jon Stewart those are extremely tough shoes to fill and I think in the very beginning Noah was having a lot of trouble finding his own voice.  When you look back it’s perfectly acceptable but you also saw how uncomfortable Noah was up there.   Now?  Noah looks like he’s been sitting at that seat for decades and he’s truly taken the reigns.

So let’s get back to business. Tuesday’s Daily Show featured the latest installment of Trevor Noah’s quest to discover who the real president is at the current time. Up to this point, we’ve seen Steve Bannon and Fox News take the title, but tonight brings us a man who literally married into his position next to Donald Trump. That would be Jared Kushner, Ivanka Trump’s husband and current director of the Office of American Innovation (via Uproxx)

Real estate executive and son-in-law to President Trump Jared Kushner gets tasked with defeating ISIS, brokering peace in the Middle East and reforming the justice system.