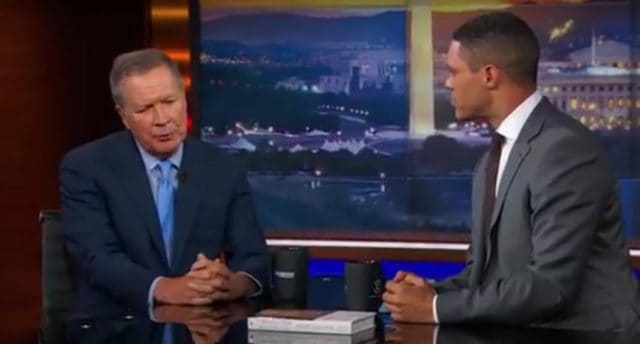 The issue with John Kasich that’s always prevented him from being more popular than he should be is that he’s kind of boring.  It’s that simple.  Of all the Republican candidates during the 2016 election he was probably the most “qualified” for the job of President of the United States.  But this was the pervading issue the entire time:  It’s as if he was the little runt of the litter who kept trying to get a word in and no one really listened to him when he finally did.  It’s like the guy was bullied but not on purpose.   And frankly his personality was no better than the wet noodle type of guy he came off as.  Like I said, boring.

But I have to say it was nice to see him talk some reality on The Daily Show with Trevor Noah.   The Ohio Governor and “Two Paths” author weighed in on how politics has become polarized and explains why he declined the offer to be President Trump’s running mate.  But the real question is this:  was anyone watching?  Again, that’s the issue with this guy.  He’s a smart man and knows his stuff.  It’s just that you never want to listen to him.

Listen to him below: it’s worth it.