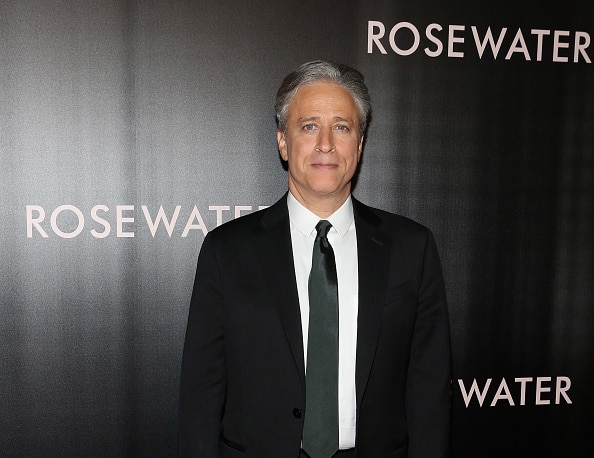 Jon Stewart has been hosting The Daily Show on Comedy Central for 15 years now and has had huge impact on politics and the way they are discussed on television. Last year, Stewart left The Daily Show temporarily for a few months, with John Oliver taking over the reigns, so that he could go and direct his first feature film, Rosewater. With Rosewater hitting theaters today in a lot of cities, Stewart took to Reddit to do an AMA and promote the film, and we here at TVOvermind have compiled his best answers to the many interesting questions he was asked. Check them out below and enjoy!

When told that he and Bill O’Reilly should just kiss already: It’s really the height differential that keeps us from consummating.

If he was president for the day, who be the first person he hired and who would he pardon: My first presidential hire would have to be Colbert.
And I would pardon…There’s gotta be a couple of low-level weed cases!

When asked how Stephen Colbert smells: Stephen smells like – it’s a cross between- Squints into distance. Persimmons and a tattered copy of THE HOBBIT.

How he keeps his hair so “luxurious”: Uh… that is the nicest thing anybody has ever said to a 51 year old victim of male pattern baldness. I think the big secret is never turn around. Face everyone.

If he would do another debate with Bill O’Reilly: Uh, I would absolutely. I always enjoyed it. It reminds me of everything thanksgiving i had growing up, where my relatives would come over. And we would always end up screaming and yelling over plates of gravy and cranberry sauce, and then laughing our [butts] off while watching football later.

On how, in Star Wars Episode IV, the Dianoga (trash compactor monster) did not get crushed: It’s an excellent question. What I believe occurred is within those compactors, you can generally find some corroded areas, where a small compactor-monster – a baby, if you will – could find respite. My guess is through the years he had worn that small opening into a home den. And had been trained in a skinnerian fashion to retreat to it, upon hearing the giant grinding gears of the compactor kicking in. I can’t prove it, but in my heart, I believe it to be true.

Who he would interview if he could go back in time: Uh… I would say Abraham Lincoln. For the obvious historical importance aspect, as well as the “secret to the confidence of being able to rock the top hat and Amish beard.”

His favorite animal: Always been an otter fan, an otter guy. Something about the mischief. And their cute little hands.But when you really study it, and you see that they can actually rip things apart with them, it can take a dark turn.

Advice for soon-to-be college freshman: Don’t ride it too hard! Sometimes college kids put inordinate amounts of pressure on themselves for each individual class or moment. If you end up relatively hard working, and sane, you’re gonna do okay.

What did you think of Jon Stewart’s Reddit AMA, and do you plan on going to see Rosewater?