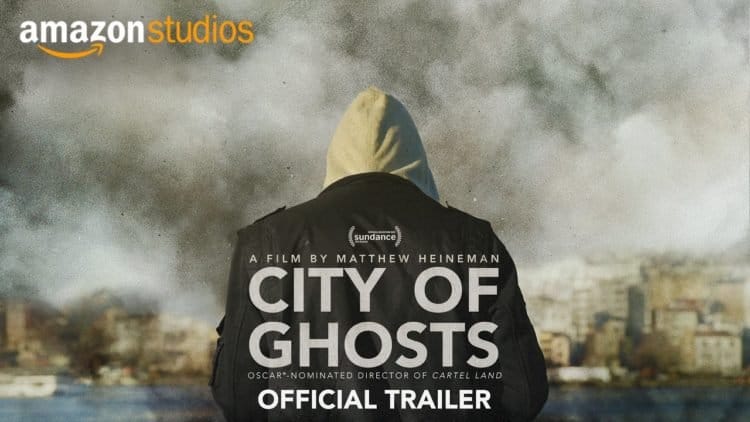 Many of us live in relative safety without having to worry about the state of our home, our family, or the world we inhabit. We’re comfortable enough with the world around us since our lives aren’t in constant danger, and we can be assured that we probably won’t be shot in the street. The same can’t be said for everyone the world over, as the citizens of Raqqa learned many years ago when ISIS took over falling the overthrow of a tyrannical dictator that the people had grown tired of. The leadership of Raqqa changed hands a few times before ISIS took over, and even though it was only a four-year reign before the Caliphate’s influence was weakened, Raqqa and its people suffered immensely during that time, and it’s very fair to say that many of those that lived through the nightmare and the fight against ISIS still aren’t entirely free of the nightmare their lives became. Giving credit where it’s due, however, the journalistic movement that gave rise to this documentary was brave in a way that many people might never find the courage to replicate.

Many of us hear stories of ISIS, of how their reign of terror has spread from one country to another, and yet we know little to nothing about places such as Raqqa, as they might show up in the news as decimated areas where the dead number in the hundreds, perhaps the thousands. Careless as it feels, we take these accounts as a reason to be enraged, outraged, and yet grateful that our own shores aren’t plagued by such violence. Too many people would give their unvarnished opinion about ISIS without seeking to do anything but cluck their tongues and shake their heads at the mindless violence, but the truth is that the lives of the individuals within the documentary, and the many images, are horrifyingly real in a world where real evil masks itself in a cloak of righteousness that absolves their actions and openly recruits children to create another generation of killers that are more than willing to end the lives of others that don’t conform to their ways.

Realizing that the people in this documentary didn’t all have a working knowledge of politics or terrorism makes this story even more tragic since several of them were living a good life at one point, at least until ISIS came in and made it clear that if people weren’t with them and weren’t ready to bend the knee, that they were against them and would be treated accordingly. It’s an outrage to many that such a thing would happen, and while there are comparisons that can be drawn in many countries in the past few years, the truth is that activists within other countries have been violent at times, but have not managed to get away with the public executions of those they’ve deemed to be their enemies. Had such a thing happened in the US or many other countries it feels safe to think that the punishment handed down would have been reasonably severe, but for more than one reason, Raqqa was ravaged, and forgotten in a large way.

This documentary should easily remind a lot of people that as bad as they think they’ve had it in life, a lot of us don’t know the meaning of the word terror or what it’s like to flee the country in fear for our lives. Some might call it overly dramatic, but they would be doing a huge disservice to those whose lives have been changed by the terror and tragedies they’ve seen and experienced. Raqqa is the type of place that many don’t remember to this day, and many more don’t understand when it comes to what happened to its people when ISIS took over. The documentary is choppy in terms of events and how bad things managed to get at times, but seeing how ISIS went after the journalists that did their best to get word to the world about what was happening, it’s not surprising, especially since all of them had reason to fear that the terrorist group would come for them at some point.

Many documentaries show a part of the world that some feel can’t be entirely real and others realize is horrifyingly real, but at the same time is closer than they might think. The lives of those in this piece did change dramatically and for the worse at times, but the fight was not given up throughout the years that the journalists stood up to ISIS as they continued to deliver their message to the world outside of Raqqa continually. Despite the threats and the losses they incurred, they were determined and resolute in their manner to somehow find a way to topple ISIS, no matter the personal cost to them.