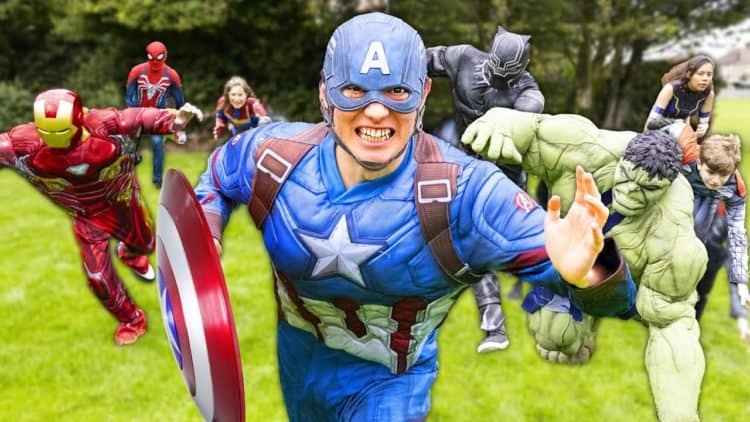 Anyone who watched Squid Game on Netflix knows very well how brutal it was and that each person who played the game might have exhibited at least a little bit of skill that gave them an edge during each of the six games. A lot of people in the group didn’t have enough skill or intelligence, or luck, to make it to the next round, but those that did were able to move on each round. Taking into account how insane the games actually were it would be prudent to make them even crazier when thinking of placing Marvel superheroes into the mix. Considering how dark the games get it’s hard to imagine any of the heroes sacrificing each other, but thinking of each one of them might do when it came to being thrust into the games on their own is kind of interesting since the Marvel heroes all possess various skills that might help them to last until the end. But then again, they all have weaknesses that might keep them from winning that easily.  Here are just a few heroes that would be interesting to see in Squid Game.

Any feat of strength would be easy for the god of thunder since his strength and martial prowess are more than enough to see him as a top contender for the final prize. S0 something like tug of war would be a simple matter, but it’s fair to say that the honeycomb challenge might not be as easy. The marble challenge might be kind of interesting, as would the glass bridge challenge. Thor is tough, insanely strong, and not a complete dullard since he does have a fair amount of intelligence. But anything that requires him to think too much might not be his strong point. At the end of the day though, it does feel that he would survive, but not without a little bit of difficulty.

He’s strong, he’s intelligent, and yet he’s so noble and virtuous that watching other people die for the sake of a game wouldn’t be the easiest thing for Steve Rogers to endure. Knowing that he or many others would be shot if he stepped out of line might keep him playing the game. But it does feel as though Steve would be working the angles as much as he could in his head to see a way out while saving as many people as possible. If there’s any real weakness to Captain America in this game, it’s that he wouldn’t be able to simply turn his back on the suffering of so many people and would feel the need to risk everything to gain as much as possible.

Tony Stark knows how to think his way through things, and without his Iron Man suit, the most obvious ones anyway, it feels safe to say that his intelligence would still be his best asset. The tug of war might be one of the hardest challenges, but the glass bridge, honeycomb, red light green light, and even the marbles might not be that much of a problem. But the final game would be kind of tough depending on who he stood again. Of course, if he had his nanotech suit with him, ready to be used at any given time, he’d dominate the contest or just get bored and blast his way out after eliminating the controllers.

It’s kind of laughable to think of really since Wolverine could win or lose and it wouldn’t matter. Shooting this guy doesn’t do the trick, but it does make him angry. It feels as though letting him run rampant through the games would be the best idea since it would eliminate the game entirely and make certain that it would take a while to build it back up. But simply allowing him to play the game would be interesting since he might do quite well at most of it given his enhanced reflexes and his other abilities that might come into play. Logan isn’t always a savage and might do well in just about every game.

If anyone feels like a cinch to be the winner of Squid Game then Wanda would at least be in the running. Her power would make the games a thing of ease, and the honeycomb challenge wouldn’t be that big of a deal. The tug of war would be a joke, and the marble challenge would be a thing of ease. The only thing that might drag Wanda down would be her lack of desire to hurt people, kind of like Captain America. But otherwise, she could dominate the games since her powers are such that they can be intricate or they can overwhelming, and if her control is on point, then there’s no way to beat her, at least not without tweaking her emotions.

The games would have to be altered in quite a few ways to make it challenging though.