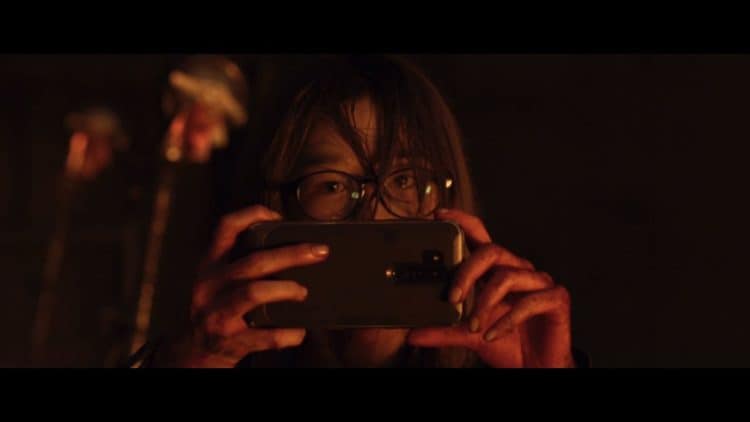 Logging into Shudder can be taken nonchalantly just like any other streaming site, but there’s something extra to the movies that it features, as well as the shows, that sets it apart from so many others. Movies such as Warning: Do Not Play are the types that might bore those that don’t see the point of them or terrify others that see past the thin to skin-deep veneer that’s there to give the feature its appeal. This movie in particular is one of those that needs to be watched in its entirety and also needs to be given the type of attention that allows a person to really dig into the meaning behind the story. It’s not so insanely complicated as to require a genius to figure it out, but there are moments when comprehension is gained through the close attention that is given to something that might otherwise be a bit confusing. All in all, it’s about a woman that’s attempting to come up with her next movie and finds a gem that probably should have been left alone, like many things in horror movies should be.

Has anyone ever noticed that? The things that we might not do in the real world are what people tend to do in horror movies, and it often becomes obvious that this is set up to be purposeful frustrating since a lot of people would be glad to offer up advice if they could, and some do. But this movie in particular is one of those that people can’t help but think ends up going just the way it should. It’s true that if people hear about things being ‘cursed’ or otherwise touched by bad luck, some folks would gladly stay away from such items, while others would test their luck and the odds by deciding to believe that their fate is in their own hands. In the real world, this might work since the power of belief only goes so far most times. But in the movies, one can easily guess that whoever is willing to buck the words of safety and sanity is going to be taking their lives into their own hands.

That tends to be the case with this movie since the rookie director, Mi-Jung, who’s been preparing her own movie for the past 8 years, gets wind of a student movie that was banned some time ago. After meeting the director, Jae-Hyun, she’s warned to forget about the film and to simply go on about her way. But as one can imagine, because it happens so often in horror movies, Mi-Jung eventually becomes obsessed with the movie, and as that obsession grows, so too does the danger.  Mi-Jung eventually begins to find out why Jae-Hyun went so crazy when it came to the film, as she eventually learns of the origin behind his movie and the theater in which he and his associates were filming in. The visuals for this movie are kind of ridiculous as well as impressive since, as a horror movie, it definitely delivers on the gore, the suspense, and the overall terror that was meant to be felt when it comes to the various elements that are used to create the story.

But somehow it still feels a bit empty, perhaps a little incomplete, as though it could have explained a couple of things a little better. That might have been done by design though, since it does kind of feel as though the movie might have been crafted this way on purpose, to give the audience the feeling that things were meant to be left unresolved in a way that they would feel by the end. Open endings and unfinished narratives are a bit frustrating to be certain, but they also leave people wanting more, and as irritating as that feeling can be, it’s a guilty pleasure of many storytellers, leaving people wanting a conclusion that doesn’t end on a ‘what if’ note, and frustrating them with plenty of questions as to what really happened and what could have possibly happened. The fun of it comes from the fact that a story can continue long after the credits roll since imagination doesn’t end unless one wants it to.

But the fact that a horror movie can end like this is something that’s gone on for a long time now, and this movie continues the trend since thinking that things aren’t resolved tends to create a stronger sense of horror than if the protagonists end up killing off the antagonist. With a clear and well-defined ending comes a sense of comfort and peace that might not endure, but is still thought to be pleasing for those that don’t want to contemplate what might happen if the horror could start all over again. Personally, that’s the best kind of horror movie.