Home
Movies
Horror
Yes, There is a Movie Titled Sharkula 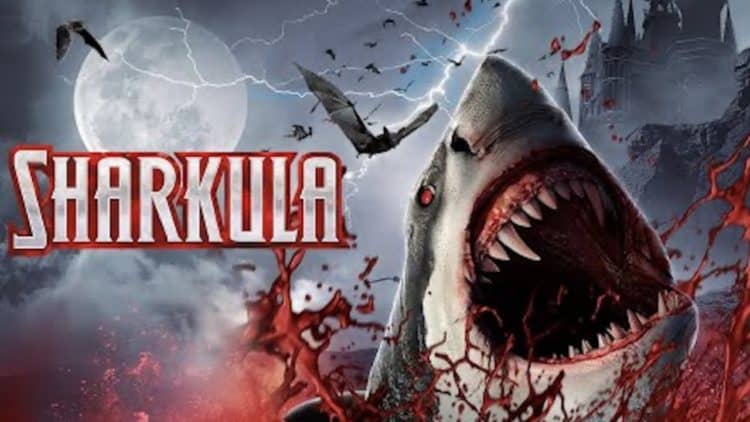 Try to contain your excitement when it comes to this low to no-budget movie that imagines what it would be like if a vampiric shark was roaming the seas. Yeah, I was on pins and needles too, and hoping that you could possibly detect the sarcasm. In all fairness, Wide Eye Releasing is doing something they think is noteworthy since they’re taking the time and effort to create something that is thought-provoking…kind of. But imagine what might happen if one of nature’s most voracious predators became hungry for blood. Putting the sarcasm aside for a moment, kind of, one can honestly say that it would be a little different since by debunking the many myths about sharks that remain today, this would be kind of frightening. The movie looks about as cheesy as one would expect, but there has been a desire for such low-budget movies in recent years as several of them have been brought to light. True, we’ve laughed at even the most horrifying since, surprise, a lot of us survived 2020 with our humor still intact. But Sharkula is one of those that are bound to attract the attention of many people for a short period before being added to the collection.

Honestly though, a shark actually craving blood would be a terrifying vision, and not just because of the glowing red eyes that are seen in the trailer. When one thinks about it, a shark is moving for the majority of its life and eating for a good part of it. Their appearance alone is horrifying to a lot of people that fear the open ocean and just about everything in it, since watching a shark approach is kind of hypnotic in a way. But those that don’t know any better might think that death finally punched their number and it’s time to bend over and kiss it goodbye.

The fact that sharks don’t actively seek out humans save for rare cases is why this movie would be kind of terrifying in the hands of someone that could bring the effects to life without as many extreme close-ups designed to hide the fact that the budget is this low. Thinking that a shark was actually gunning for a human up the threat level exponentially since it would mean that nothing in the water was safe, and anything that came too close to the water would be in just as much danger. Trying to play up this idea feels kind of silly, but at the same time, it’s kind of amusing since it stands to reason that a vampire shark would a holy terror on the high seas since if the shark bit another shark, and then another, and so on, then the sea would become a death trap for anyone that decided to ply the waters for any reason. There are a few reasons why this idea feels like it should be furthered, but whether or not that will ever happen is tough to say. Sometimes the ideas are sound enough to take them forward, but others, well, it’s best to just say that they kind of peak once they’re on the internet, which is where they tend to belong.

It’s an interesting idea to be fair since once has to wonder if just about any living creature could be affected in this manner. Could just about any animal become a vampire? It’s curious to think of since it leaves a lot more questions, like what would happen if other animals became vampires. Or would certain animals just die once bitten? Throughout the annals of horror history, it’s easy to see that some creatures might be susceptible to becoming monsters if they’re bitten or otherwise affected, but others might be resistant or too frail to take on the characteristics of a vampire. A shark appears to be custom-made for the role of a vampire since the inside of its mouth is all jagged teeth one couldn’t imagine would become even more terrifying. But that raises another good question since sharks are constantly losing and growing teeth. Would the shape and strength of their teeth change upon becoming a vampire, or would it be business as usual?

There are a lot of questions to consider with this idea after all, but it’s fair to say that not all of them would be as pertinent to the story, at least not in a way that would make sense. Some folks would likely question a little too much and get into the idea of analyzing the given data in a way that would wreck the movie even further. But the idea is interesting and the fact that someone stepped up to the plate to make it happen is even more interesting. So hey, more power to them, and it might even be worth giving the movie a look.