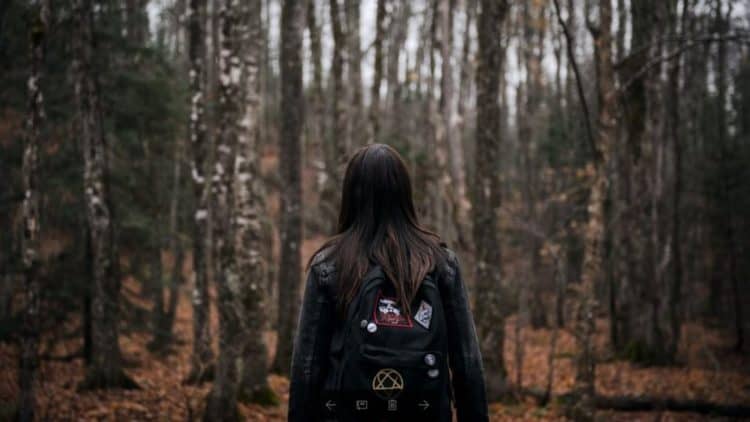 Some conduits probably shouldn’t be opened, but being human, it’s obvious that good judgment isn’t always something that’s bound to be used first. In horror movies, good judgment is kind of rare at times. In Pyewacket, emotion is what helps disaster to strike when it comes to Leah and her mother. The understanding is that Leah and her mother aren’t seeing eye to eye and that her mother is doing her best to cope with the loss of her husband, which is only making things worse. Added onto this is the fact that Leah has taken a serious interest in the dark arts and occult practices, a common thread between Leah and her friends. When her mother decides to sell their home and lease a place far out in the woods, far from her friends and everything she knows, Leah’s attitude only worsens as she makes her way into the woods after arguing with her mother. Unfortunately, the moment she decides to utter the words that she wishes her mother was dead, something was listening. Even worse is when she decides to conduct a ritual from one of her books, summoning a demon that she knows little to nothing about.

Just from a practical standpoint, summoning anything that humanity knows so little about is a foolish move since without the understanding and comprehension needed, the ramifications for such an act are tough to describe in a single article. But as many people know, practicality doesn’t come into play where horror movies are involved, and people aren’t always known for having the most level heads when they’re in their teens. In short, when Leah summons Pyewacket, she has no idea what she’s in for, and when the spirit materializes in her room one night, she finds herself in the woods the next morning, as the spirit dragged her all the way from her bed. Fear is a natural reaction that takes hold, especially when strange noises can be heard throughout the house, but when she has her friend Janice stay over, things start to get very real.

Upon waking and finding that Janice is in the backseat of her mother’s car, scared out of her mind and unwilling to get out until they take her home, Leah realizes that she might have made a serious mistake. Upon speaking to a paranormalist that was featured at the beginning of the movie, Leah finds out that the only way to get rid of Pyewacket is to conduct the ritual again, only backward this time to dismiss the demon. The river analogy that the individual mentions are quite interesting since it makes the case that dark spirits and other malevolent beings are ready and willing to interact with the living, but they require a bridge from their world to ours. Unfortunately, the individual also tells Leah that Pyewacket is a shape-shifter that can assume the form of those closest to her, which means she can’t trust anyone until the ritual is completed. Sadly, this means that once she starts the ritual, the demon is ready and shows her an image of her mother, dead, to unsettle her. Leah is even more confused when she hears her mother calling for her, leaving her to think that it’s just another illusion that the demon is using to confuse her.

The worst part comes when her mother actually returns home and Leah, still convinced that Pyewacket is messing with her mind, douses her mother in gasoline and sets her on fire. After leaving the house to burn, Leah is questioned by the police concerning a call she put into 911. The only body they end up finding is the charred corpse of her mother in the ruins of their home, leaving the movie to end on a note that suggests that while Leah is in serious trouble, Pyewacket is still on the loose. As far as horror movies go this one was definitely interesting since it didn’t deviate from what might be considered standard, but it delivered the type of story that is intriguing due to the way it’s presented. At the risk of offending anyone, the idea of a disturbed teen having access to anything even as remotely dangerous as the occult is something that can be terrifying or kind of amusing, in a very dark way.

Apart from that, this movie does take a little bit of effort to get into, since the overall story is fun, but the pace is a bit tough to get used to. Several elements are capable of making this movie enjoyable, but in my opinion, I can’t help but think that this story could have been helped in a few ways. Overall, Pyewacket was a fairly decent movie that delivered a few chills, but kind of got lost at some point.