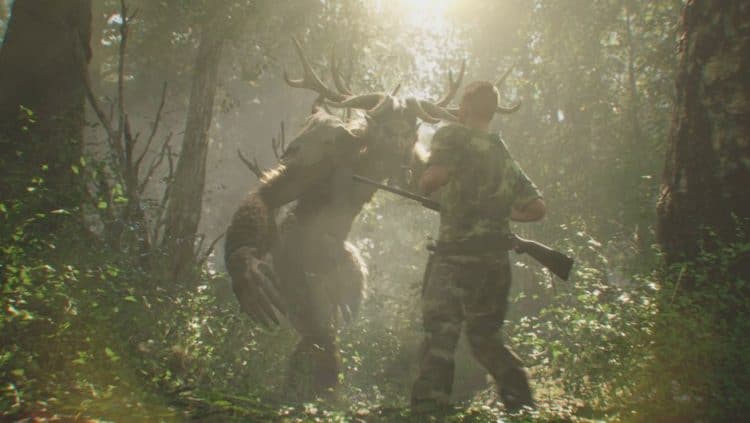 Leshy introduces an interesting proposition for players. Throughout the decades of gaming, players have taken control of all manners of heroes. Everything from soldiers, knights, ninjas, wizards, cyborgs, and monster hunters has captured the imaginations of people worldwide. Surely, anyone that has played any fantastical campaign has encountered everything from vampires, evil robots, zombies, and even mutants at least once. However, has anyone ever considered why these enemies were feverishly trying to kill players? Has anyone considered the side of their story? Well, Leshy takes that basic concept and allows players to explore it.

Developer Glivi Games S.A. is producing a new game that lets players jump into the skin of “The Leshen.” Based on ancient Pagan and Nordic mythology, the Leshen is a spirit of the forest that acts as a guardian of sorts. Depending on where one was first introduced to this cryptid, its origins and powers will vary. For many gamers, the Leshen was most famously introduced within the mission of “In The Heart of the Woods” on The Witcher III: Wild Hunt at the village of Fayrlund. In this game, the Leshen was a teleporting, towering creature with earthbound elemental powers. Fighting it was a brutal venture and there were particular rules and regulations that were associated with it regarding The Witcher universe. Thus, another example was with the movie The Ritual. In this story, the Leshen was a strange humanoid beast with large antlers that stood upright on four legs. It had the ability to manipulate reality and trick its prey into falling into its traps. However, in this case, Leshy will center on this spirit of being a shape-shifter. It can transform into other animals while protecting its home from an invading corporation trying to overtake it.

Leshy takes place during the year 2040. Mankind now has advanced technology that enables it to pillage resources from the Earth with ease. Titanic trucks, overpowered saws, and even mech suits are now available for crew members to utilize in this timeline. The basic premise with this game is nothing new. Everything from Avatar, Ferngully, and even Captain Planet has dabbled into the evils of greed and industrialization. Leshy is actually fairly epic in scope with its narrative. Even though players will be taking control of the titular character of Leshy, there will also be other mythological creatures waiting to be found. This game will encourage exploration with its semi-open world format. Players will be free to try out different pathways and secrets are buried deep within the Slavic wildlands. If players take time to poke around, there will be a slew of different collectibles and power-ups to find.

The gameplay is within the “hack and slash” variety. The Leshy is played through a third-person perspective and players can run, leap, dodge, and unleash a flurry of attacks. There will be special moves that players can use. The Leshen can shape-shift into a bear that acts as a tank with heavy attacks. It can absorb more damage and tear enemies apart. On the other side of this spectrum, players can also transform into an owl that is a little more stealthy and nimble with its approach. Of course, there will be many other powers to unlock that are related to the powers of mother nature. Thus, they can also be upgraded in a variety of ways to help with outwitting the enemy. There will be a myriad of enemy types that will involve tactical planning and the constantly switching up of skills to overcome.

Leshy’s branching upgrade tree can go in a multitude of ways. The player will be free to mold the character into the warrior that they want it to be. The environment will be interactive to a certain extent. Players can experiment with the gameplay mechanics and will be free to toy around with their fighting. Things can be picked up and used as projectiles and the Leshen can even trick the enemy’s technology into attacking them. The combat is grounded, intimate, and has a sense of weight to it. It is rooted in reality in terms of how damage is done. Things will catch on fire after an oxygen canister is hurled at it and soldiers can even be ripped in half. Yes, the combat in Leshy is bloody and unforgiving. Any player that took time to play X-Men Origins: Wolverine for the PS2 will have a good idea of what to expect here. It very much has the same vibe.

Slavic mythology is growing in popularity. Thanks to games like The Witcher III and even God of War, there are now Nordic tales of old that are becoming more mainstream. It appears that Leshy will also help stoke this fire. The creatures in this game will be faithfully created both by their design and theme. Players will be introduced to other myths of Slavic origins and they will see the world through their eyes. It is currently not known if players will actually take control of these creatures during certain side-quests. Perhaps, it will be just through a narrative angle. Whatever the case, there will be a rich story to unravel in Leshy that spans between the worlds of humans and cryptids alike.

Leshy still has a ways to go with its development. It seems to have a solid vision of what it wants to be. It definitely is primed to introduce a new type of hero to the world. Even though hack and slash games are a dime a dozen, very few allow gamers to get into the skin of a mystical Nordic creature. The developers seem to be passionate about Slavic mythology and they are shooting to make this tale as accurate as possible. Right now, Leshy seems to be slated to be a PC exclusive. There are currently no plans to have this released on consoles, yet. Development for this IP is scheduled to be completed sometime in 2023. Gamers who are fans of Nordic folklore or brutal action games should have this on their radar.