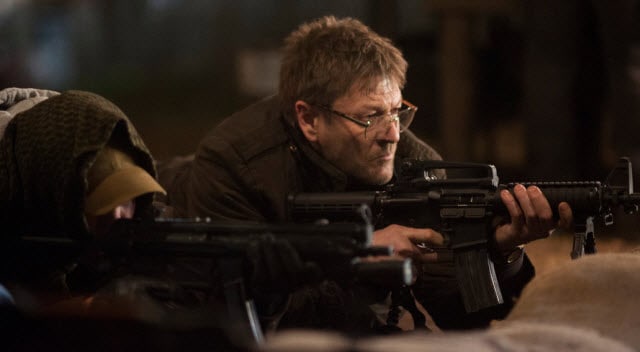 The thing that drew me to Legends was Sean Bean. Being a huge fan of his work in the past, I was more than excited to see him take a role that didn’t involve him dying out in the first few episodes. I also have a pretty healthy respect for TNT as a channel; they usually create good, engaging content, if a little shallow. HBO, FX, they are not. But they do try, and they have a history letting good performers do their thing.

Legends continues this tradition. He is such a shining star in this episode. Every line of dialogue, every scene, he sells so hard. But that’s the problem. He has to sell literally every moment like its the end of the world because, in both the universe of the show and the reality of the show’s future, he has to.

But I’m getting ahead of myself. Let’s get to it.

Legends is about Sean Bean’s Martin Odum, who works as an undercover operative for the FBI. He retains his natural Yorkshire accent as Odum, which is explained away as him being the son of a servicemen. Though I’m sure some will quibble with him keeping the accent, the moment serves as a nice little bonding exercise between Bean’s Odum and Tina Majorino’s (Napoleon Dynamite) Maggie Harris. Harris is an ‘airforce brat’, too, and she and Bean share a small moment. Not sure why it struck me as it did, but it is indicative of the show: lots of great little moments, lots of mediocre big ones.

The episode begins with a quick exposition dump in which news footage plays as a newscaster narrates the damage done by a right-wing terrorist group. After maybe two minutes of footage it immediately flashes forward nine months. Odum has infiltrated the terrorist group, as a former demolition engineer named Lincoln Dittmann. After shooting at paper targets in the dark, he is brought into one of the buildings for saying unkind things about the murderous terrorist groups. The best part? Bean has to use an American accent to sell his cover as Dittmann. And man, is it weird.

I mean, Jesus. Bean’s American accent is, to put it kindly, not very good (many would call it comic) but its so awesome. He sells it so hard, almost too hard. It’s like listening to an impersonation of what an American sounds like, but without the irony. I loved it so, so much. Truly, though, it’s a good damn thing Bean throws himself into the performance because if there had been one hint of self-consciousness the whole thing would’ve come crashing down.

After some routine tough-guy talk and tough-guy posturing, Bean is accepted as a member of the group. The leader of the group, Founding Father (the most pretentious, back-slapping villain name of all time [fits the character, really]), wants to meet Bean. But before things can be arranged, the ATF crashes the camp and nearly blows Bean’s cover. Bean shoots and kills two terrorists and then is escorted out by the ATF.

Afterwards, Odum goes and visits his kid. He is divorced, and trying to have a relationship with his son even as his disappears for months at a time. His son, played by Mason Cook (Lone Ranger), is understanding, and actually does a pretty good job with limited screen time. His wife, played by Amber Valletta (Gamer), is the typical wet-blanket wife; as soon as Odum shows up and talks to his son, she tells him that he can’t just disappear and show up and expect things to be the same. Odum had literally been there thirty seconds and had only asked his son to go to dinner with him the next day. Obviously, Valleta’s Sonya doesn’t like the fact that Odum is gone for so many months a time (which is why she is the ex-wife), it’s really presumptuous of her to just nag him the second she sees him.

Actually, let me rephrase: it’s the writers fault, specifically showrunner Howard Gordon’s, who after working for many years in television should know better. Valleta deserves better material than ‘stock shrew’ and it’s irritating that that kind of character still exists on tv today. Some women nag, we get it. But if aliens were to come down and use only television as a reference for humanity, they’d think the men were awesome and women were boring. Which is how men see it, too, actually.

Bean’s Odum starts to see this black man in a trench coat (the actors name is Billy Brown, I believe) popping up in places that he frequents. He sees him at his ex-wife’s, and then next at an asian grocery. Now, the asian grocery scene is kind of cool, because both Odum and the cashier are speaking what I think is Chinese (correct me if I’m wrong), but when Odum sees trench coat guy, he runs off after him. The cashier then speaks to him in English, which means that they were conversing in a different language just because. To me (reading too much into it, of course, but the show is better when you fill in the many gaps) it says that Odum does it to make the man feel more comfortable around him as well as practice his language skills. Another really great small moment, undercut by some dumbass big moment. This is the central theme of the show.

But as Bean starts to settle back into his old life, he gets a call; his CI inside the terrorist group says his cover is still intact. Odum is called back into the office (located… somewhere I can’t remember) and comes face-to-face with big boss Nelson Gates, played by actor Steve Harris (The Practice) and Ali Larter’s (Varsity Blues) Crystal McGuire. McGuire doesn’t like him; she thinks he’s reckless and blah blah blah standard supervisor blech. Gates thinks he should be in the field, because blah blah blah best undercover guy of all time, guys. I’m being flippant, but it’s really just standard crap. Boring. No good moments there.

I will say that both Harris and Larter sell it as hard as Bean does. Harris has a cool charisma that comes across full-force and you believe that he is suited to the gravity of his position as the boss, but Larter struggles at first. She has much more to sell, and do, but for what material they give her, she does really good work. As cliched as her character is, she doesn’t loaf on the characterization. As the episode goes on, she finds a good rhythm, especially with Bean. There’s even an interesting moment where she impersonates a stripper to warn Bean of his possible blown cover, and it’s a good piece of acting.

But the plot is whatever. It’s barely relevant, to be honest. Odum eventually catches up with trench coat guy and he tells Odum that his life is just another cover, that Martin Odum doesn’t exist. The stranger then runs off without telling him more. He clearly wants to talk to Odum, which is why he keeps following him around. Why doesn’t he just tell him what the hell is going on? Later on, the guy gets killed before he can tell Odum anything. Why did he not tell him what was going on before? He gives Odum a book that contains the clues to the mystery but it didn’t need to be a mystery!

Look, I’ll be real: this show isn’t great. It’s only watchable because Bean is a friggin’ rockstar and every actor works to make their characters believable, and that leads to a lot of great, little moments. When Bean finally meets up with Founding Father, he has to talk him down from blowing up 600 pounds of C-4 with a deadman’s switch. Bean knows the guy is a coward and basically seduces him into giving up the detonator. It’s so cool, and so underplayed by Bean. He moves like a snake charmer and hypnotizes him into giving up. It’s really, really cool.

And their are other moments too; there is a character named Bobby (whose actor name I can’t find, for some reason) who Bean has look up facial recognition for the trench coat guy. Bean goes to his home and Bobby is playing a dancing game to keep in shape because he “hates the gym”. Small moment, good moment. Then Bobby is killed by the mysterious force. Big moment, sucky moment.

If I had to grade it, I’d give it a B. Without Bean, I’d give it a C-. And without the hard work of the cast, I’d give it a F. That being said, I’m going to continue watching it, because it does have some interesting bits. I just hope the writers can give better material to a cast that clearly deserves it.