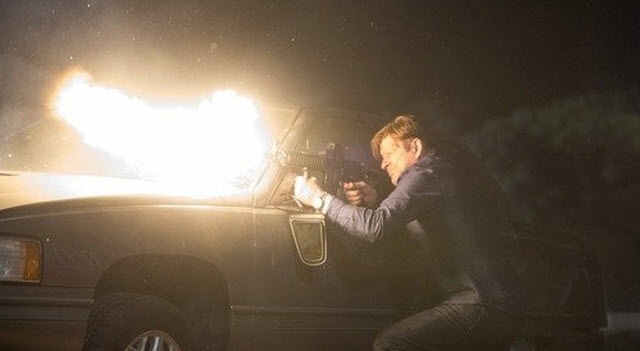 Legends had its two hour finale tonight and I am wondering what circle of hell I have been placed in. I would just like to know the heinous crime I committed to have to sit and watch this godawful thing beat me with an hour and 59:45 minutes of crap and then fifteen seconds of interesting.

I’m not even sure if that paragraph was coherent. I have like five pages of notes and literally one of the things I wrote down was positive.

Basically, the gist of the episodes was the wrapping up the whole “murderous prince” storyline while also wrapping up the “Martin Odum is a Legend” mythology. They basically just drop the “prince” storyline in favor of moving into the mythology stuff, all of which is boring and pointless because I do not give a single Canadian donut hole (also called Timbits) about any of these characters. Not a single one.

Not Odum, not Gates, not Maggie, not Crystal, not Sonya, not Aidan. None of the characters are good characters; there are good actors doing hard time stuck inside cardboard suits but not any good characters. We know nothing but the most tv tropey nonsense about these characters, and it never gets any better.

We find out in the second half of the finale that while in Iraq Odum operated under the name “John Cameron”. “Cameron” is the legend of a British spy working undercover. Operation: Raining Fire (the most on the nose, useless, stupid name) was actually meant for an enemy camp a few miles from the one that got bombed, but “Cameron” called it down upon the camp to stop Verax.

I’m about to step on my soapbox. Cover your ears (well, eyes) children; I’m about to get very angry.

“Cameron” calls down the airstrike on the Verax camp because they are holding Saddam Hussein’s WMD’s as leverage against the US government. The storyline is that they found the weapons and weren’t gonna tell anyone because, who knows. Now that I’ve set the table:

I am really, really tired of this cavalier and irresponsbile gerrymandering of history. Do they not understand what the invasion of Iraq meant for world history? Do these people writing these storylines not understand how disgusting this is? The United States had a terrorist attack on its own soil, killing four THOUSAND people, changing the American attitude for the foreseeable future and launching us into a neverending “War on Terror.” Finding those WMD’s in Iraq would’ve changed EVERYTHING. Everything. If Saddam had actually been a threat instead of a son (George W. Bush) cleaning up the mess of his father (George H. W. Bush), the course of history would totally changed.

But instead what we get is the exposure of the United States as a bully on the world stage, a murderer of civilians and combatants alike with no regard for either. We’ve been at war for over half my life and I’m supposed to sit here and watch a show that demeans the lives lost? I’m supposed to accept this revised timeline that justifies the US actions in Iraq? Thousands upon thousand of Iraqi civilians are dead. Dead. Killed in combat that WE STARTED.

It’s like using the Holocaust as a tragic backstory: don’t. Don’t do it. Don’t do it unless it’s not a cheap, lazy trick to get a quick emotional jolt. If you must use history, and you must revise it to fit your narrative, make sure it’s not just about more senseless slaughter, or to turn your character into a badass. It’s disrespectful for the innocent American, Iraqi, and many other nations lives lost.

In the end, Odum is framed for murdering the director of the FBI, and Deputy Director Spiller (who became an ally for a brief second [everyone bought his act because they are dumb]) becomes head of the FBI. It was actually kind of interesting to see Crystal navigate a Senate hearing and seeing the widespread corruption. But it still wasn’t good.

I am glad this show is over. I am glad that I don’t have to spend my Wednesday nights on this. I am sorry that you had to sit through this and read my reviews.

But whatever. The hell with it. It just makes you appreciate the good shows.

See you on another review.