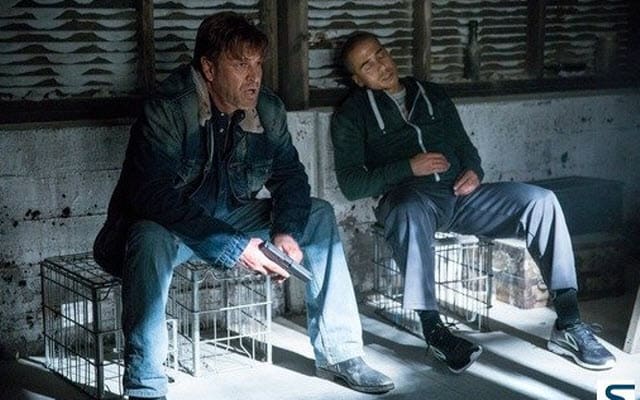 In the first episode, I said the thing that drew me to Legends was Sean Bean, and that still holds true. Every line of dialogue, poorly written or not, is infused with charisma and expertise. He is a very, very good actor.

But, it’s not enough anymore. This was the first episode in which I didn’t really give two craps about how he performed. There wasn’t a single Bean-y moment powerful enough to overcome the stench of a million mediocre moments and a billion bad ones.

It’s so weird how bad this show can be. When Dobson is taken to the hospital, a lot of medical jargon is thrown around, and not a single sentence of it sounds believable. It doesn’t fit in. What’s the point of all the medical jargon? It doesn’t help the audience understand the gravity of the situation; we see that very clearly. It doesn’t have any purpose but to show the writers know how nurses and doctor speak. And that’s fine, to an extent, but it goes on for so long.

There is so many leaps in logic, as well. Odum is given a drugged coffee and he passes out for a few hours (?). When he comes to, Dobson is already gone and the hospital is dark. No doctors running around at all, which makes no sense; are we supposed to believe that in the space of just a few hours they cleared out a whole hospital? Wouldn’t that be suspicious as hell because, you know, HOSPITAL?!

Odum manages to get Dobson out of the hospital (and steals a REALLY CONVENIENT CAR LEFT BY AN EXPECTING COUPLE) and drives off. Of course, his phone is nearly dead, because “tension”, and he tells Gates that he’s on the run. Blah blah blah plot blah blah blah Rice and McGuire and Gates and Maggie are lovely and I wish those characters and actors were in a better show blah blah blah more plot the car breaks down and Odum and Dobson are forced to walk.

Dobson is still injured and he has to rest. But they’re in an oil field! Where could be a place to stop? Dobson collapses, Odum tries to get him up. But then Odum walks LITERALLY THREE FEET FARTHER FORWARD AND SEES AN ABANDONED HOUSE. HE JUST WISHES THAT MOTHER F’ER OUT OF THIN AIR. JUST FAIRLY ODD PARENTED THAT MOTHER F’ER. JUST POOF! THERES A HOUSE HERE WE GO!

I am losing my grip on reality with this show.

Odum, in the cleanest abandoned house of all time, finds running water, WORKING ELECTRICITY, and a FIRST AID KIT!!!!!!! HOW?!!?!??!!?!? In the basement. he finds a FULL CAN OF GASOLINE AND CHAIRS AND SORTS OF—

Basically, Dobson dies, because of course. They pop him with a sniper. But they don’t kill Odum, because television is still infected with this nonsense.

I am being really rude. I apologize. But I just can’t deal with this. They have a stable of talent and its so underutilized. I WANT LEGENDS TO BE GOOD. It had two episodes that were solid! They were good! Can we go back to that?

Ugh. See you next week.