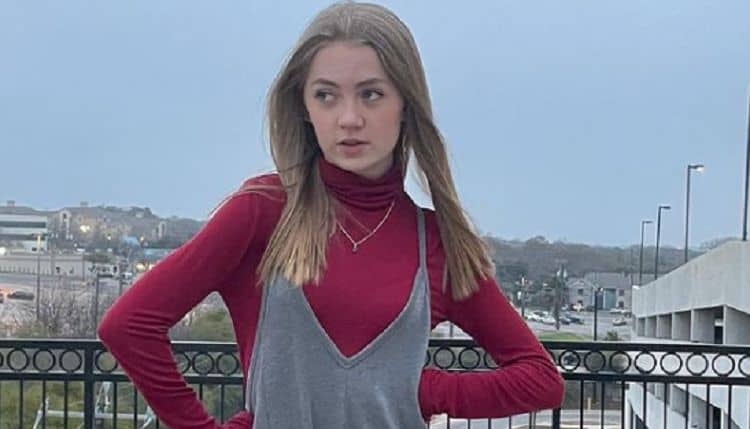 At just 16 years old, Katie Beth Hall certainly isn’t your average teenager. The rising star has been making a name for herself as an actress and she’s on the verge of a break that has the potential to take her career to new places. She will have a role in an upcoming TV series called Head of the Class which is set to be released in November of 2021. The role will give Katie the chance to share her talent with a wide audience and it will likely be her biggest break yet. If you’re not familiar with Katie, now is the perfect time to find out what she’s all about because you’ll probably be seeing her face a lot more often. Continue reading to learn 10 things you didn’t know about Katie Beth Hall.

1. She’s From A Military Family

There isn’t a lot of information about Katie’s life prior to getting into the entertainment industry, but we do know that she comes from a military family which means that she moved around quite a bit over the years. These days, she is living in the Los Angeles area.

2. She Graduated High School At 15

Katie’s acting career isn’t the only thing that makes her different from other kids her age. She graduated high school when she was just 15 years old which is incredibly impressive, to say the least. Instead of a traditional school setting, she was homeschooled through Cedar Life Academy.

Despite her young age, Katie has already formed a lot of her own opinions and she has a good idea of what’s important to her. There are several causes that she stands behind and she uses her social media presence to raise awareness to them. Some of those causes include fighting against racism, bullying, and sexual assault and harassment.

Katie comes from a very close family and she has always been thankful to have their love and support as she chases her professional acting dreams. Based on her Instagram account, it appears that she has one sibling: a younger brother named George.

5. She Has A Great Sense Of Style

Fashion gives Katie another outlet to express her creativity and she has a knack for putting outfits together. At the moment, it doesn’t appear that she has done anything within the fashion industry but it wouldn’t be surprising if she decided to do a little modeling at some point.

Katie has always been ad adventurous person and she loves a good adrenaline rush. Skateboarding and longboarding have become two of her favorite ways to get that feeling. It’s unclear exactly how long she’s been riding for, but it’s definitely something she enjoys doing in her free time.

We’ve all been told not to judge people based on how they look, and Katie Beth Hall is a prime example of why. Just because Katie has a petit frame doesn’t mean that she can’t handle herself if she ever needs to. Katie has trained in Krav Maga which is a style of self-defense created by the Israeli army.

8. She Likes To Sing And Dance

Acting is the thing that has put Katie in the spotlight, but it’s not the only kind of performing she likes to do. She is also very talented in the musical department. She plays the piano and she loves to sing. She is also a great dancer who has been trained in hip-hop and tap. Maybe one day she’ll get the chance to combine her love of music and her love of acting.

The screen isn’t the only place where Katie talents come to life. She has also found a good deal of success in the theater world. According to the bio on her website, “In 2017, she made her professional theatre debut at Studio Theatre (Washington, DC) in the Helen Hayes Award Recommended, The Hard Problem as Cathy Krohl”. More recently, however, it appears that Katie has been focusing primarily on on-screen opportunities.

After graduating from high school, it would have been easy for Katie to decide that she wanted to focus all of her attention on her acting career. However, she decided that she wanted to go to college. Her bio reveals that she is currently studying art and interior design although it didn’t mention the name of the school she attends. After graduating, she may decide to pursue a career outside of the acting world.