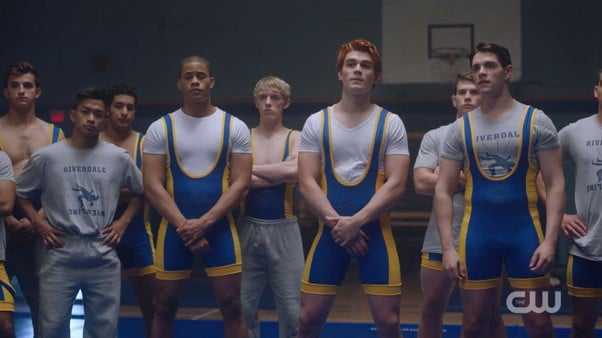 When you look at a TV show dealing with high school kids there are a few that manage to get it right since they tend to go for a very realistic look and don’t want to muddy the whole experience for the viewers. But the fact remains that within the audience, many of those watching have already been through high school or are still in high school and can easily attest to the fact that TV shows DON’T always tell the truth about the high school experience. Like anything else it’s a show and it’s meant to be entertaining, but the realism just isn’t there. It’s funny to realize that there are screwball movies that are there mostly for comedic effect but somehow have more realism in them than some of the TV shows that we watch. Like it or not, American Pie is more realistic than a lot of TV shows since it took into account what a real high school experience is like and then kind of took it over the top in a big way. But if there’s one thing to say about the TV shows that depict high school life it’s this: they make it a lot more interesting than it usually is.

5. The majority of them are insanely attractive.

Seriously, there are good-looking people in high school and plenty of people that are envious of their smooth skin and supermodel looks, but apart from that, high school is an awkward time when a person’s body is going through a lot of strange things that they don’t understand and are having trouble dealing with. Not everyone looks like they just hopped out of the makeup chair and are ready for a close-up. Bad hair days, acne, and various other issues that kids have to deal with are very real in high school and they do lend themselves to the overall experience that goes into these years, though on TV it’s as though every student is ready to step into a modeling studio.

4. A good number of them are buff or toned and in great shape.

There’s absolutely no doubt that a lot of high school students in real life are in great shape and are even this muscular considering that serious athletes tend to get big and very toned. But it’s not something you’re bound to see on a regular basis unless each high school in the country is suddenly implementing a workout regimen that’s more suited to those training for the Olympics than those who are just trying to play a game and earn a letter or possibly just have something else to show on their high school resume. Believe it or not, some students are only in sports to show that they did something else other than studying in high school, and a lot of those kids aren’t nearly as buff or toned.

3. The students usually look too old.

From their musculature to their facial features a lot of students in high school TV shows just don’t look that young. Some kids mature faster than others, that much is obviously true, but a lot of guys in high school will still have wispy facial hair at best and won’t be sporting full mustaches or beards, while young women will still look like young women, like kids in other words. Put a real teenager next to one of the many actors that play teenagers and you’ll see a notable difference without question since maturity makes a huge mark on a person and it usually shows in a big way.

2. There’s not a lot of emphasis on grades/schoolwork.

This might be up for argument but there are A LOT of kids in high school that would claim that the work has either increased, decreased, or is simply too stressful for them to keep up with on a day to day basis, and there’s little of that in the TV shows. The obvious idea is that it’s not all that interesting unless the assignments are something unusual or perhaps a little more dynamic than people are used to. But in reality, homework and tests are a way of life and the very real part of this is that a lot of high school students tend to spend a good deal of time in school and out of school focusing on their work in order to keep that ever important GPA up.

1. There are clear differences between who’s in what group.

This is possible to see at some schools but with a lot of high schools there will be plenty of people that mix it up with different social groups since they play sports together, they’ve been friends for years, or they simply like one another for various reasons. A person can be a jock, a rebel, a nerd, a basketcase, and many other things all at once. This is high school after all, people are finding out what they want to be and don’t tend to draw lines in permanent marker around the groups that they’ll be stuck with for life.

It’s true, some high school experiences are captured very well, but a lot of them are kind of worthy of an eye-roll or two.