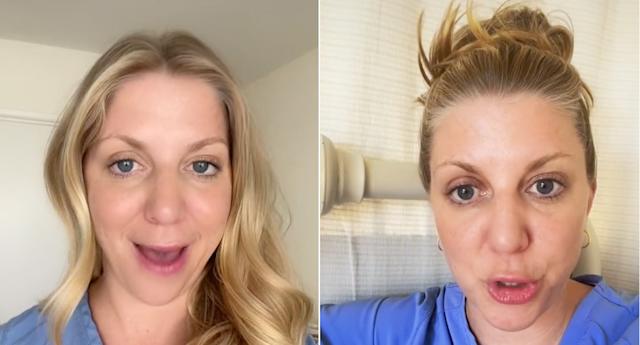 If there’s one topic that most people would agree makes them uncomfortable, it’s death. Although we know that everyone dies one day, it’s still a difficult thing for many to accept. However, as a hospice nurse, death is something that Julie McFadden deals with on a regular basis. Instead of relishing in the sadness and discomfort that is usually associated with someone passing away, Julie has chosen to become an educational resource about death in hopes of normalizing it. Her death-related content has made her a hit on TikTok and her words have reached millions of people in all corners of the world. Keep reading for 10 things you didn’t know about Julie McFadden.

1. She Is Serious About Boundaries

Julie’s popularity on social media has put her in lots of people’s orbits. Although she is grateful for the support, she has had to be intentional about setting boundaries. During an interview with Business Insider, Julie said, “I’ve gotten close to a few of my followers from my early days who have cancer, but not many because it’s hard unless you can really open up that door and be their friend. So in general when it comes to both nursing and social, I try to ensure I practice solid boundaries.”

Julie’s content may be all about death, but in her daily life, she’s all about living to the fullest. When she isn’t busy working, she loves spending time out in nature. Some of her favorite outdoor activities include things like going hiking. Being outdoors is a great way to decompress and recharge.

3. Family Is Important to Her

Not everyone is fortunate to have good relationships with their family members, and that’s exactly why Julie doesn’t take it for granted. As someone who has a good understanding of death, Julie does her best to cherish every moment she gets to spend with her loved ones.

If you’re familiar with Julie’s social media content, you know that she isn’t the kind of person who is afraid to speak her mind. However, death isn’t the only topic that she is passionate about. She has also used her platform to show her support for THE LGBTQ+ community.

5. She Has Gotten More Than 8 Million Likes on TikTok

Becoming popular on social media isn’t just about building a large following. Engagement is equally — if not more — important and that’s something Julie has plenty of, too. In addition to her more than 900,000 followers on TikTok, her videos have gotten 8.4 million views.

6. She Was Originally an ICU Nurse

When Julie first went into nursing, working in hospice wasn’t part of her plan. She told Business Insider, “In nursing school, I had this notion that being a nurse in the intensive care unit (ICU) was the ultimate job and so in 2017, I became one. During the 10 years I worked in the ICU, I learned a great deal about nursing, death, and dying.”

7. She Didn’t Expect To Build Such a Big Following

Julie was introduced to TikTok by her nieces and she thought the platform would be a great way for her to share her thoughts. At the time, though, she had no idea that she would eventually become a social media star. However, once she started posting videos, it didn’t take long for them to gain traction.

As a hospice nurse, Julie has to travel to different people’s homes. On the surface, this sounds like a fairly easy thing to do, but since she suffers from dyslexia it can sometimes be a bit challenging. During her interview with Business Insider, she said, “I’m dyslexic, so at least once a week I knock on the wrong person’s door and say, “Hi, I’m Julie, your hospice nurse.” As soon as the words come out of my mouth and I see the panicked expression on the person’s face, it hits me that I’ve read the address wrong, and off I go.”

9. She Works Per Diem

Most people who are familiar with Julie probably have assumed that she works as a full-time employee. However, that isn’t the case. Julie actually works per diem which allows her to create her own schedule. Having that flexibility is always nice, but especially in a position where she deals with death on a regular basis.

10. She Hopes to Have a Family One Day

At the moment, Julie is unmarried and doesn’t have any children. However, she is hoping that won’t always be the case. She would love to have a family of her own someday. Maybe her online popularity will eventually help lead her to the person of her dreams.