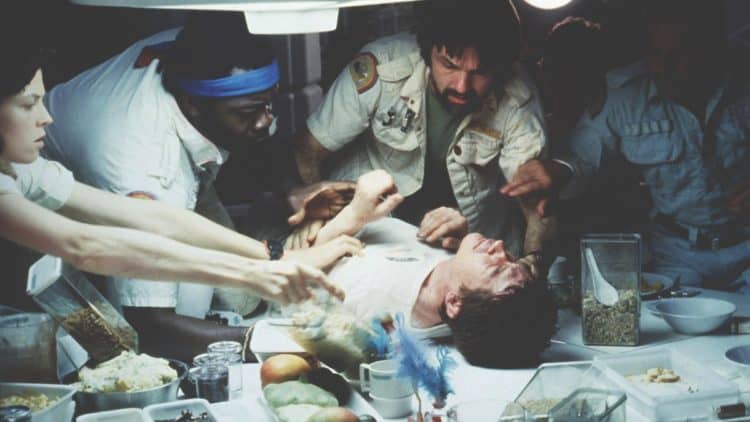 It’s official, after dominating the movie landscape since 1979, Alien will now be seen on your television screens, with Legion and Fargo showrunner Noah Hawley as the executive producer. While the exact details of the story haven’t been revealed, Hawley confirmed on Vanity Fair what this story will not be about, Ellen Ripley, “She’s one of the great characters of all time,” Hawley stated, “and I think the story has been told pretty perfectly, and I don’t want to mess with it.” Hawley went on to give an overall idea on the upcoming series, which will be about inequality and how society’s failure to spread the wealth can actually doom us, “In mine, you’re also going to see the people who are sending them. So you will see what happens when the inequality we’re struggling with now isn’t resolved. If we as a society can’t figure out how to prop each other up and spread the wealth, then what’s going to happen to us?” As you’ve read, this upcoming series won’t be a simple hunter vs. the hunted concept, thus giving the chance for the world of Alien to be explored. However, there’s a fine line that the Alien series shouldn’t cross. Let’s dig deeper into what the horror/sci-fi television series needs to avoid.

Forgetting That This Is About Murderous Aliens

Of course, the Alien series can’t consist of the protagonist shooting down the next generation of xenomorphs while in space. The plot is too thin for a television series and based on Noah Hawley’s description about the upcoming show, there’s no danger of the showrunner making that mistake. However, at the heart of the Alien franchise is the…aliens. It’s cool that Hawley wants to explore the human side of the alien world; however, there does need to be a delicate balance when telling this story. Based on Hawley’s interview on Vanity Fair, the likelihood of seeing the aliens in the first couple of episodes is slim and honestly, that’s okay. It’s important that the show build up to that big moment when the first Xenomorph makes its appearance. However, the show shouldn’t wait too long to introduce the murderous bastards. You simply can’t go too long having an Alien show that lacks, well…aliens. This in turn could end up making for a very boring television series if the alien isn’t introduced in a timely manner. This is a tricky balance. There’s no exact time on when the aliens should show up, but I do understand that the writers don’t want to blow their load too quickly. Noah Hawley is no stranger to adapting movies, so I don’t doubt his capability of successfully transferring the sci-fi/horror series to the small screen.

So the xenomorphs have finally been unleashed! What happens next? Of course, pointing and shooting is an option, but that can’t be the basis of the series once the monsters are unleashed. Unfortunately, I don’t have a straight answer on what to do once the xenomorphs are finally here (which is why Noah Hawley was chosen over me); A show usually has multiple arcs going on; however, in the midst of chaos, Aliens can’t simply go over to young Timmy doing his homework two towns away as his lieutenant mother is getting her face chewed off back at the lab. The jarring tonal shifts will easily through off the momentum of the horror that’s being presented to us. I’ve stated throughout this article how tricky the Alien concept is to translate to television. To manage the right balance of tension and horror when the xenomorphs finally make their appearance can really make or break the television show. Of course, a compelling story and intriguing characters are necessary for this to work as well. One of the biggest disadvantages is that the xenomorphs aren’t in the vein of Chucky or Freddy Kreuger, meaning that the villains wouldn’t be able to pad the runtime with their devious charm and hilarious one-liners.

Re-Introducing The Original Characters Into The World

While Hawley has confirmed that this isn’t a Ripley story, this doesn’t mean that the popular heroine won’t pop up to make an appearance. At the moment, there’s no word on whether this is a prequel to the Alien films or a sequel to what’s been done thus far. Whatever the case may be, the writers need to be careful on how they inject the original Alien characters into this world (If they do, that is). A fun cameo can be cool here and there; however, if they’re given a thankless role then there’s no point in involving them in the first place. The details surrounding the project remain murky at this point so I don’t want to dwell on this topic too much; however, it’s important to show respect to the original cast that helped make Alien such a popular franchise.