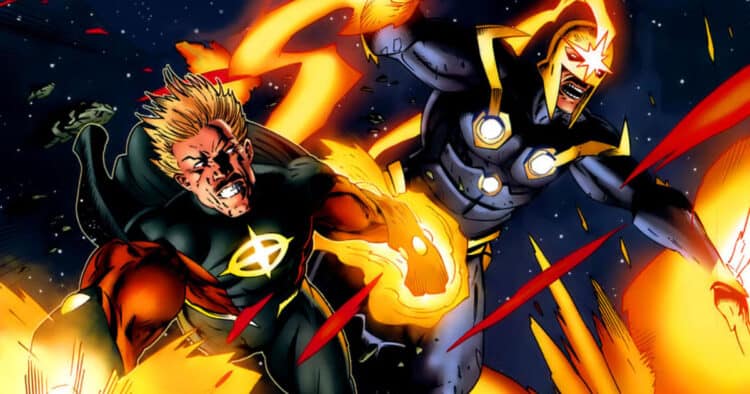 There’s a great amount of speculation going around when it comes to the next batch of Avengers, and while it’s likely that this group has already been selected, it’s fair to think that there are plenty of other names that could be called upon, even if it’s just a bit of a joke. There have been so many Avengers and reserve Avengers over the years that it’s tough to name them all. Some have come from other teams, others have come and gone as they were never really cut out to be Avengers, for one reason or another. Some might warrant a cameo and others that might not last for more than a quick second since they weren’t that great when they were first brought into the comics. But the point is that it would be nice to see how the Avengers’ ranks were bolstered throughout the years, even if it means that there are going to be a few duds out there. Some of them might be kind of interesting to watch.  Here are five obscure Avengers we’d like to see in the MCU.

It might be that Jack’s origin story is kind of, well, silly in a way, but there’s no other good reason to keep him from the big screen, or even the small screen since despite his costume, which could be retconned and redone, he’s still a powerful character that could be used in man interesting ways. Not the least of these has to do with the fact that he could very easily be a cosmic hero given the nature of his genetic makeup and the fact that he kind of has to be away from other beings at times to keep them safe. But it’s not likely that we’ll see Jack since there are a lot of reasons why the MCU would remain less than supportive of this character.

Part of the reason why she might not be shown in the MCU could be that she’s usually seen in a two-piece bikini, and who knows how many people that’s going to offend. But the fun part about this is that she could be something tasteful to wear and still be an interesting part of the team, especially if different factions of the Avengers were finally created. The West Coast Avengers would be a great team to see a rise to prominence since they had several intriguing members in their group. But if Tigra does come to the MCU it is fair to think that fans are going to be divided about her appearance.

A lot of people have actually stated that this character was kind of boring since he lived up to his name, but he was never given the chance to show what he could really do. As the first Hispanic individual to join the Avengers it was a big chance to do something special with it, but somehow the creators did end up missing the mark quite often with this guy. If he did get drafted into the MCU and then into the Avengers he could likely be a more dynamic character. How that might happen is anyone’s guess, but it does feel as though it could be possible, if only because of his powers.

The fun part about this character is that he was effective in the comics for a while, and he did serve as an Avenger for a while. But it can be seen throughout his history that he did get dissed a few times and wasn’t quite as popular as other characters.  As another cosmic character though he could be someone that fans might respond to in a positive manner. If Nova is coming to the MCU then it’s fair to say that there are a few other individuals that might need to be given a chance, and Quasar is one of those that could be used to help bolster the ranks when it comes to one battle or another. Whether we’ll get to see him though is uncertain.  We’ve seen the big names, it’d be nice to see some of the lesser-known Avengers.