Home
Television
Maybe the Eternals Should Remain Apart from the Avengers 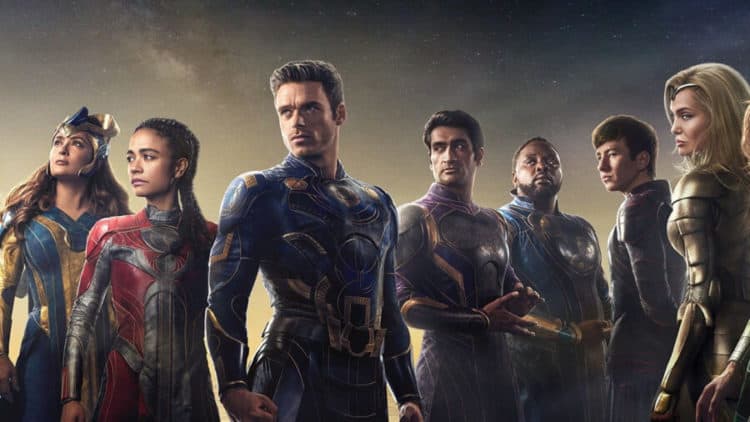 In an era when diversity and inclusion are still enough to get one movie to change the look and even the gender of certain characters, one wouldn’t think that keeping people apart would be a good idea. But when thinking about the Avengers and the Eternals it sounds like a great idea since looking at the vast difference between the groups, it’s fair to assume that the Eternals would be better off being treated as a group that would respond to the types of threats and situations that were more cosmic in nature, no matter that they’ve been residents of the earth for so long. Keeping the two groups apart would be easy enough in the MCU since the comic book stories that were created decades ago haven’t been realized yet. But the likelihood that such a thing could happen is always there since those that have been fans of the comics already know that the Black Knight was set up at the end of the Eternals movie, and Sersi spent time with the Avengers as well. The mention of a couple of Avengers in the movie also teases the idea of bringing these two groups together.

But maybe it would be better to keep them apart and capable of working together without having to mix and match their members. It feels likely that the Eternals might not even support such a move, at least not all of them. Ikaris, if he’s still alive, might not even want to think about the idea, especially if the Avengers decide to relocate their base to the head of the slain Eternal. Sersi might find it necessary to be a part of the team, for her own reasons, but Kingo would likely go back to his chosen lifestyle. It’s tough to say what Sprite would do, but it’s possible she might stay away, if only because she wanted to live her life and grow up as she’d never been allowed to do. Seeing how the rest of the team is either dead or off on a trip to find their missing companions, it doesn’t feel likely that this would happen anyway, but with the MCU there’s no way to know what will happen next.

Makkari would be a fine addition, but it does feel that she might keep herself apart from the Avengers, as would Druig since they appeared to enjoy their seclusion from humanity. Thena doesn’t feel as though she would be fully accepted thanks to her mental condition, and Phastos doesn’t feel likely to agree to join with the Avengers if only because he grew tired of humanity’s constant need to destroy themselves. That’s kind of amusing since one of the directives of the Eternals was to not interfere, which was next to impossible since they were also charged with guiding humanity. It’s like telling a person to move something across the room without touching it too much and then bemoaning the fact that the person had to touch it at all. Getting back to the subject, it feels likely that all but a few of the Eternals would even consider a place among the Avengers for several reasons that might have to be drawn from the comics or made up as the story went along.

Keeping them apart would also take things back to the way they were before the crossover that brought the Guardians of the Galaxy into contact with the Avengers, meaning that the teams would continue to operate independently from one another, but could possibly make use of their gathered skill sets for one galactic conflict or another. Given that the Avengers have been at the forefront of many conflicts, both on earth and across the galaxy, it’s fair to think that the crossovers to come would still be great to see, but so long as the teams remain as separate as possible while being able to work together, it could work. That might sound horribly exclusive and could easily be brought as a reason for a lot of folks to cause a stir, but the fact is, keeping the teams apart as much as possible helps to build up the individual movies while still making use of other heroes and teams that can help out from time to time.

Mingling one team with another is bound to happen from time to time when it comes to the MCU and the crossovers that are coming. But at the end of the day, keeping each group apart, especially when it comes to the Eternals, who are insanely OP, to begin with, feels like a better idea since it allows each group to develop as they need to. In other words, keep the crossovers coming, but the Avengers and the Eternals should probably be kept apart as much as possible. Even Sersi might not be a huge boon at this time for the Avengers.