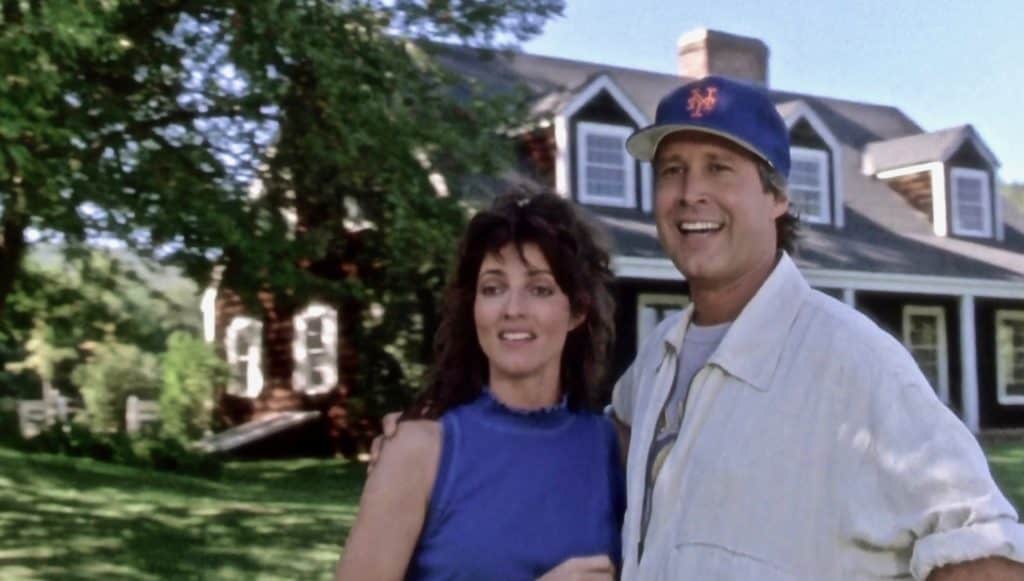 When taking stock of Chevy Chase’s movie career one can see a lot of hits along the way, but it wasn’t the biggest or best movie he’d ever come up with according to critics. Siskel and Ebert actually championed this movie to be fair, so it did resonate with some folks, but not on the same level as the Vacation movies that a lot of people came to love so much. The story was simple enough, Andy and Elizabeth Farmer moved from the city to the country, to the town of Redbud specifically, so that Andy could start writing his book and enjoy the calm and quiet of the outdoors. But it’s not long after they arrive that the couple comes to understand that life in the country is a little tougher than they’d anticipated, since there are quite a few things that they didn’t need to worry about in the city that come with country living, such as a completely different culture that’s not always as welcoming to outsiders as some people might think. Throughout the movie, they manage to finally settle into their own groove, but it’s a bumpy ride on the way there.

It was kind of hard to imagine Chevy Chase making a mediocre movie around this time since he’d already been proven to be so insanely funny during his career at that time. But one could argue that age was starting to kick in just a little bit since he wasn’t a young man and his days on SNL, where he was apparently not well-liked, had been over for a while. The movie works on a lot of levels since it is easy to relate to if a person has ever lived well away from the big cities and knows what it’s like to be located off the beaten path. It’s not all that bad, but it’s a different way of life to be certain.

Rebooting this movie wouldn’t be a challenge since it’s possible to find an amusing couple to make it work. Getting people interested in the story again might be the issue, and it’s fair to think that a lot of people from the first movie might not even want to come back, those that are still around anyway. There weren’t a lot of younger individuals in this movie as it was primarily adult-oriented, as evidenced by the cast and the situations that they were thrust into throughout the length of the movie. It’s a big hope that if such a thing did ever happen that the content would still be roughly the same, but obviously updated for the current era since yes, that’s still an important thing unless a movie is going to be made to cater to a certain era. In truth, this movie could be kept back in the 80s or 90s before technology had connected people across the world with the push of a button, but it’s debatable whether that would be effective or not since it’s possible that this movie could work either way and it wouldn’t really suffer for it. But it’s also a matter of whether or not there would be enough interest in this story to bring it up again since as far as being capable of making people laugh again, there’s no question that it could do that. Find someone that’s funny and it could work perfectly.

But revisiting old movies, while popular these days, isn’t a foolproof plan for making something work. Funny Farm was a fun movie at the time it came out and it did manage to be fairly successful, but it still wasn’t given the same type of respect that a lot of other Chevy Chase movies were. To be realistic, the laughs were a little more forced and the humor was a little more vague than usual, and it didn’t have the same type of edge that a lot of his other material had. The fact is that as Chase started to get older, his comedy started to fall short as each movie after the last might have had a handful of fans here and there, but it didn’t really wow people like his earlier works had done.

It feels wrong to even say such a thing, but it feels like the truth, so it’s hard to get away from. The desire to see old movies get rebooted isn’t a universal thing since there are some movies that need to be left alone since they’re good enough as they are. But in some cases, it feels as though a few of the older movies might be able to be re-invigorated if given a chance. Funny Farm could be an amusing reboot if someone had the idea to put some effort into it. The question now is if anyone is even listening when an idea like this is floated into open territory.