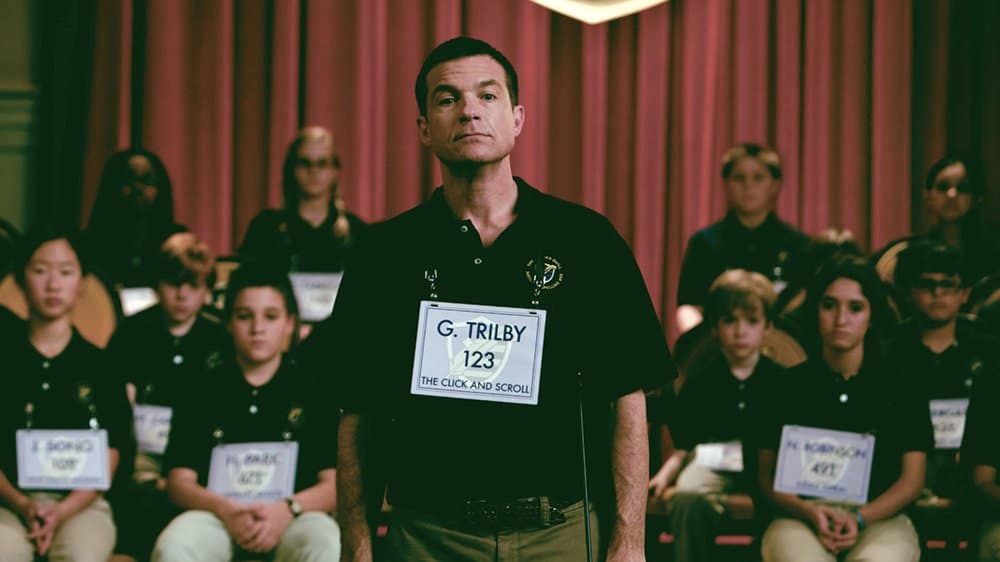 Movies that are designed to be immature and out of control are often just as complicated as any other movie when it comes time to give them a bit of attention or simply ignore them. Back in 2013  a movie was made that was actually rather funny, but could also be called one giant temper tantrum that was perpetrated by a man that had something to say in a very convoluted and messed-up kind of way. Guy Trilby, played by Jason Bateman, is anything but the hero of the story since he goes into the movie fully aware of his actions and what he’s doing, and the fact that he’ll be disrupting a national spelling bee by entering as an adult who is well within the rules but is still exploiting loopholes that most people wouldn’t think an adult would be sleazy enough to attempt. In all fairness, however, it does leave a person hoping like hell that spelling bees aren’t really like this and that the movie is exaggerating the reactions of the parents in a big way since things get rather nasty at a few points.

Guy is up to the challenge however since despite being thought of as nothing more than an idiot that’s hijacking a national spelling bee, along with the help of an obscure journalist played by Kathryn Hahn, becomes a media sensation as he reaches the final competition, where many people are willing to show him a level of hate that is just a few hairs shy of being violent. There is a trick to this story however since Guy is fully aware of what he’s doing and why he’s doing it, but he’s not about to clue anyone else in until he’s convinced that it’s time, which is at the final stage when he and a young kid that has been eager to befriend him the entire time finally square off for the last round of the spelling bee.

Things do come to a head when Guy realizes how important this win is for the kid and his family, even if it means perpetuating a system that puts a little too much pressure on the kids involved. But the main point of the story is that this is a revenge tale, something that is set up for Guy to take a measure of payback against a man that abandoned his mother, and him, without ever looking back. The idea of throwing a long-running tantrum, of ruining the spelling bee for so many others, wasn’t directed at anyone but the man that had started it all, Guy’s absentee father. This would definitely be a negative way to go about things, but it also stands as something that a lot of people can’t help but understand since a parent that either has no idea that they have a child or doesn’t care is someone that a lot of people would love to get even with. The manner in which Guy tried to take his revenge is a bit juvenile, to be honest, but it’s also something that can be understood on a more visceral and vindictive level that some folks might feel was entirely justified. The only problem is the collateral damage that comes emotionally and psychologically to those that are indirectly involved.

There is an idea that Guy did the right thing from a very skewed point of view however since the truth is that Guy could have found another way to get his father to notice him, but after being bitter for so long it does feel that some folks would either explode, or they would find a way to get back at those that hurt them in some way. In terms of his revenge, Guy went through a lot of hell, a lot more than many would think of enduring, to ruin his father’s spelling bee. In the end, he did relent and his father did get to see his spelling bee finish with a winner, who happened to be the kid that was trying so desperately to make a friend out of Guy. The movie was something that a lot of people might have felt was a moral issue that was hard to figure out, since Guy didn’t pretend to be good, and in fact did things that an angry teen or pre-teen would do until it was time to get down to business.

There’s a reason this movie was somewhat enjoyable, and it has more to do with the fact that it has a dark sense of comedy to it, serious humor that’s easier to laugh at since it’s the type that we deal with most often when the comedians have gone to rest and we’re in need of something realistic that we can laugh at. It’s not meant to be wholesome and funny, since you might feel at least a little guilty laughing, but you’ll still do it.