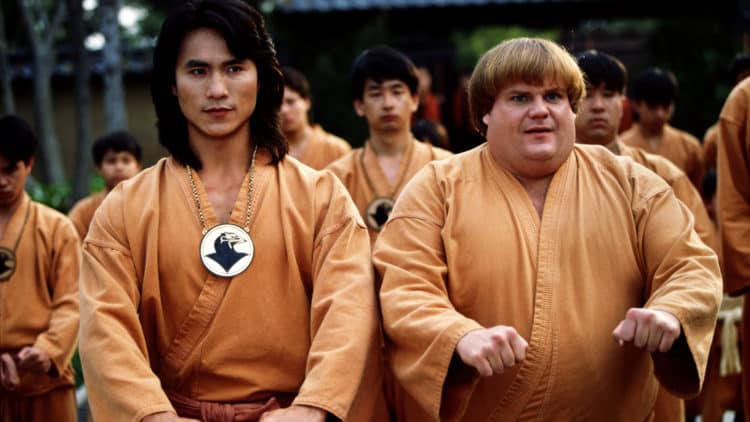 Why do the good die young? This bittersweet reality resounds too clearly, especially when it involves brilliant people, who were masters of their craft. When it comes to the world of comedy, one of the greatest losses we have encountered is that of Chris Farley, who died of an accidental overdose in 1997. This shook the entertainment industry, and devastated fans all over the world. Farley started his career as a regular cast member of the sketch comedy and variety show,Saturday Night Live (SNL), before pursuing a successful career in film. It was supposed to be a flourishing career that would have produced classic comedies, whose re-runs we would still be enjoying up to this day. His last flick before his untimely passing was the martial arts comedy, Beverly Hills Ninja. Here are five reasons why we believe the film has all the elements of a perfect action comedy:

5. An interesting back story

Farley portrayed the role of Haru, an orphan raised in Japan by a group of martial arts masters. Haru tries his best to fit in, but does not seem to get it right. He may not have the proper skillset to be a martial arts master, but his good heart and persevering nature make up for it. Haru lands his first mission to investigate a murder mystery that transpired in Los Angeles. This allows him to put his ninja training to good use, and also makes him get to know himself better. All these factors work together to create an enjoyable film that perfectly showcased Farley’s comedic expertise.

4. The presence of an effective antagonist

The main antagonist of the film is the dapper Martin Tanley, portrayed by Nathaniel Parker (The Inspector Lynley Mysteries). During his secret mission, Haru discovers that Martin is involved in a money counterfeiting business. Haru’s investigation puts him in harm’s way, as Martin tries his best to get rid of him. Farley and Parker have this odd chemistry due to their opposing personalities. Farley is clumsy and unhinged, while Parker’s moves are calculated and precise. Their “catch me if you can” scenes involve some slapstick comedy that is very reminiscent of an action comedy from the 90’s.

One of the people Haru grew up was his adoptive brother, Gobei, portrayed by Robin Shou (Street Fighter: The Legend of Chun-Li). Unlike Haru, Gobei was a martial arts master in the making, and who was known to have Haru’s back in times of distress. This is the reason why he was sent by their sensei to secretly oversee Haru, and protect him during his mission. The scenes wherein Gobei has to secretly save Haru’s neck puts him in compromising situations are memorable and lighthearted. The two characters may not be related by blood, but their brotherly bond is as strong as a martial arts’ flying kick.

Haru’s main love interest in the film is a woman named Sally Jones, portrayed by Nicollette Sheridan (Desperate Housewives). Her character is introduced as Martin’s girlfriend who is starting to get suspicious of his actions. She visits the Japanese temple where Haru is residing in to seek assistance, and asks for help in investigating Martin’s shady dealings. It was not difficult for Haru to fall head over heels for Sally’s bombshell beauty. One of the big twists in the film also involved Sally’s character, whose real identity was revealed towards the middle of the film. Her real name turned out to be Alison Page, and she was also on a mission of her own to catch Martin red-handed, as she suspected him to be responsible for her sister’s murder. Together, Haru and Alison team up to take the bad guys down, while falling for each other along the way. Every action star has his own version of a gorgeous leading lady, and Alison ticks off all the boxes.

1. Out of the box action sequences, paired with a kickass soundtrack

Who could forget the hilarious action sequence of Farley, as he pretended to be a Hibachi chef in a teppanyaki restaurant to spy on Martin? Or the time when he crashed the warehouse where Martin was conducting his illegal operations? There are just a few of the actions scenes that packed a punch, and still continues to live rent-free in fans’ minds. The film’s soundtrack was also a perfect fit. From Carl Douglas’ “Kung Fu Fighting” to Blondie’s “One Way Or Another”. These upbeats tunes matched the theme of the film, and essentially captured the characters’ colorful journey to fighting for justice. The film may not be everyone’s cup of tea, but it certainly makes for an entertaining watch that is uniquely Farley’s.