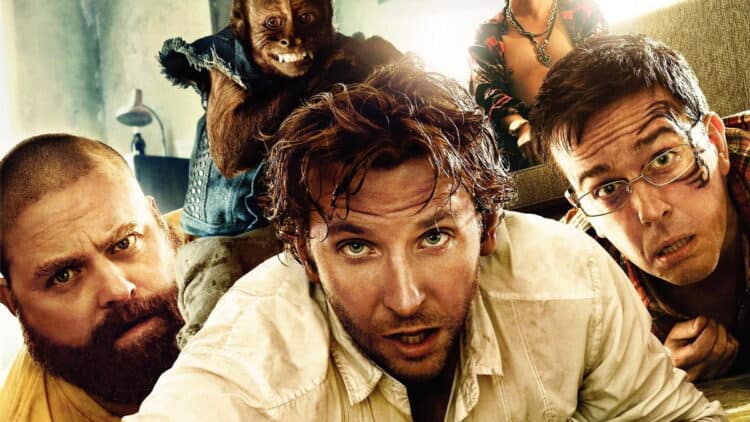 Now and then it’s possible to find various similarities between movies that otherwise might have nothing to do with each. When noticing these moments it’s fun to take a moment and sit back to see just how alike they are and how one might have had some chance to inspire the other. There isn’t really anything to tie The Blues Brothers to The Hangover 2, but when taking a step back and trying to recall a scene that felt fairly similar it was possible to come up with something that was kind of funny to consider since the two scenes below are kind of alike.  The physicality of the scenes might not be to the liking of some folks, but the reason for the physicality is hilarious since it creates a humorous take on different cultures that in one case shows ignorance of a culture and in another shows a lack of learning. But the general idea is that the men in these clips that are getting beaten have kind of earned this abuse even if it’s not considered to be necessary by some folks. For the rest of us, it’s just hilarious.

A lot of fans will no doubt remember the visit to the temple in the second Hangover movie when Stu, Phil, and Alan woke up and had to retrace their steps, again, and in the process had to return a monk to his temple. Unfortunately, when they walk into the temple, Alan was bound to be his same, ignorant self as he started out asking if the place was a P.F. Chang’s, which drew a few comments when the movie came out, and then went so far as to make even more noise. When one of the monks came up and started smacking the hell out of the three men as they continued to speak it took a few good whacks before Stu and Phil figured it out and decided to stay quiet so that they could step away and discuss what role the temple had to play in the night before.

The strikes that the guys take look insanely painful, but not so much that they can’t get back up. Being hit with a staff is, as many could attest, not pleasant in the least bit, but it’s also not always fatal or even capable of putting a person down for more than a few seconds at best. Of course, it’s all a matter of intent, and had the monk been doing anything but teaching a lesson it’s fair to imagine that none of the three would have risen so quickly. But then, it wouldn’t have been as comedic since the whole idea of physical trauma usually revolves around the belief that it’s being used for a cheap laugh. A lot of times it is, but the fact is that it works since as long as the overall feeling is comical and doesn’t get too serious, then there’s a good chance that it will tickle the funny bones of many individuals. Some folks might say that violence isn’t needed, but that’s a great joke that some might get a chuckle at since physical pain is actually quite useful when it comes to comedy.

A comparable scene that came in the release of The Blues Brothers back in 1980 took place between Kathleen Freeman, Dan Aykroyd, and John Belushi, or rather, The Penguin, Elwood, and Jake. After being released from prison, Jake is picked up by his brother Elwood and driven to see Sister Mary Stigmata, where they learn that the orphanage they grew up in is going to be foreclosed on by the bank unless they can come up with $5,000. When Jake states that he and Elwood can come up with the money and tries to leave, Sister Mary refuses, to which Jake replies that she’s up a certain creek, which earns him a hearty whack with a ruler. When Elwood decides to help him out with a choice word or two of his own, he ends up getting a smack. This goes on for a few seconds until Sister Mary ends up breaking the ruler on Elwood’s head, and then whips out what looks like a very hard and very long stick that might be a type of yardstick, or just her backup when she needs it. Anyway, a person wants to put it, Sister Mary is a scary individual.

There could be no connection at all, or it could be something faint and coincidental, but the fact is that these two scenes are quite interesting considering their similarities. It’s hard to tell who would pack a worse punch, a monk, or a nun. Plenty of Catholic-raised individuals from decades before might want to put their money on getting whacked by a nun, but in all honesty, both would probably hurt like hell.