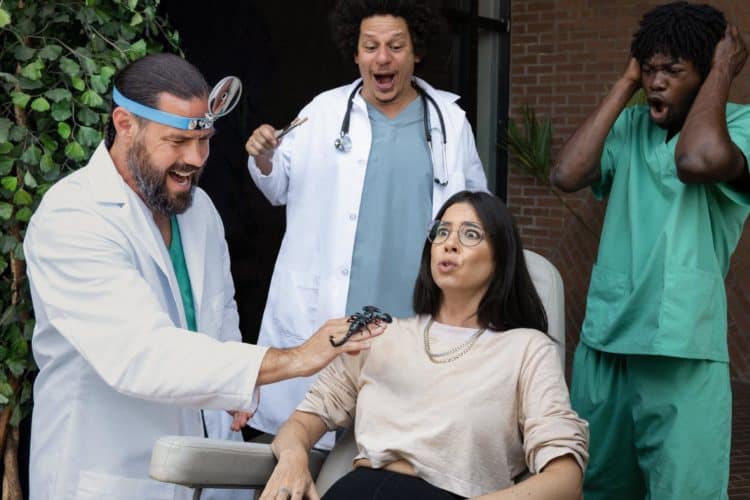 It does appear that Jackass might be able to move forward if that’s the plan since it doesn’t look as though there’s a shortage of people willing to put their bodies and their mental health on the line when it comes to joining the crew. Those that have seen every show and movie up to this point will recognize a few throwbacks to the MTV show, while many others will likely find themselves either laughing or gagging or both, as the Jackass crew continues to find ways to make people shake their heads and wonder what in the hell is wrong with them. Don’t bother waiting for an answer, it’s better as a rhetorical question since the core group, apart from Bam and, sadly, Ryan Dunn, that started the movies are back again, grey hairs and all, to torture one another and the audience with the various gags and stunts that they decide to pull as the beginning of the movie is, well, what you might expect, especially when it comes to how often Chris Pontius likes to flaunt his junk.

If anyone is going to bother arguing about good taste and limits to comedy then it’s easy to state that they should turn the movie off and remember what they’re watching before deciding if they want to continue or not. The Jackass movies aren’t for those that can’t handle this kind of sickening humor and it’s definitely not for those that can’t understand why these guys are putting themselves through this. Throughout this movie, the stunts only tend to get worse as they test the crew physically, mentally, and emotionally. Funny enough, one can see how a couple of the individuals might actually feel like sitting the next movie out if there is one. Where the entire crew used to be ready and willing to go, it would appear that age is starting to mellow the guys out just a bit, especially when it comes to putting themselves on the line for the sake of the fans.

One can’t help but feel sorry for the newbies on the crew since as enthusiastic as they sound and as much as they laugh most of the damage off, it can’t be helped to think that they don’t really understand what kind of toll these stunts are going to take on their bodies after awhile. It would be tough to think that they have no idea since after watching Jackass for just one movie it would have been easy to see that the stunts aren’t exactly gentle when it comes to the type of damage taken. But poor Ehren and Steve-O still manage to take on some of the worst stunts of all. In all fairness, every one of the crew does manage to take their lumps, but when Steve-O has his genitals covered in bees it’s very easy to wince. Ehren on the other hand has to take various cup checks which involve a heavyweight MMA fighter socking him in the cup, then a skilled softball pitcher tagging him in the groin, which is then followed by a pogo stick that does a bit of damage to his testicles.

It’s not too hard to see how animal rights groups would argue that using live animals for some of the stunts would be questionable but said individuals would still need to calm themselves a bit since with each stunt using a live animal, there was always a handler close by to ensure the safety of the animal. Those that want to state that the animals are being unnecessarily agitated and can’t consent to this might need to chill just a bit since the animals prove that they’re entirely capable of defending themselves without fail as none of the animals are harmed, but the same can’t be said for a couple of the crew members that take on the stunts. In short, the animals aren’t damaged, but the crew members are given their fair share of injuries as everything from a scorpion sting to a few broken bones incurred during another run-in with a bull are suffered on set, while the animals are cared for and kept safe. It’s all a person can do to laugh and not wince as Johnny Knoxville goes flying into the air after a bull tosses him like a bottlecap.

Whether or not this will be the last Jackass movie, it does feel that if the newbies take over the movies in the years to come, it just won’t be the same. The original stars are getting old, which is seen without question, and it’s a good bet that eventually the many injuries they’ve incurred will force them to believe that it’s time to pack it in and leave the stunts to the younger generation. It was just a matter of time to be fair.