Home
Movies
Can Ares Debut Before Hercules In The Marvel Cinematic Universe? 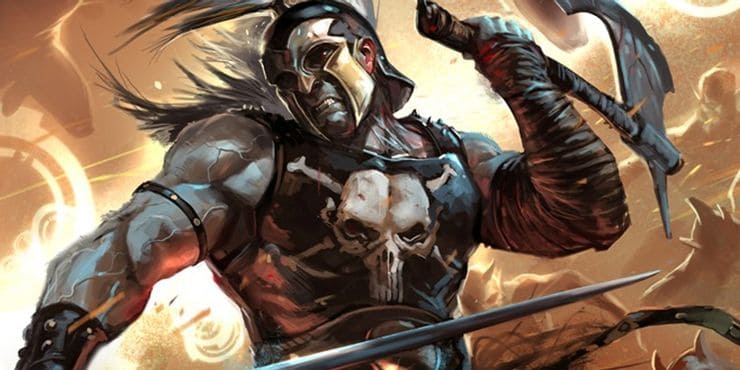 Name some of the most popular Olympian gods in Greek mythology and the name Ares is sure to come up. Why him? It’s probably because he’s the god of war. Back in the ancient times of Greece, war was a very prominent way of life, so this guy was pretty popular. Out of of all the Greek gods of Olympus, he was also one of the most widely disliked of the bunch. Ares courted war for the sake of bloodshed and made a habit of irritating his family. One example is having an affair with the beautiful Aphrodite while she was married to Hephaestus, the Greek god of blacksmiths and craftsmanship. This was one god who fully indulged in his nature and didn’t care about consequences. Unlike Hercules, he is considered to be anything but heroic. With all of that in mind, how cool would it be to see these Greek gods in the Marvel Cinematic Universe? We’ve already seen them in Marvel Comics and both Hercules and Ares have had prominent roles during a particular Marvel era. But of course, as any Marvel fan would know, before the Greek gods joined the costumed heroes in Marvel, the Norse gods beat them to it. It all began with Thor being exiled to Earth and learning a lesson in humility and in doing so, he eventually became a hero to the people of Earth. Oh, and let’s not forget that he’s a founding member of the Avengers.

But Thor’s time with the Avengers would eventually end. Not really, of course, because everyone thought he was dead, but a character like him could never stay dead. I mean, he’s a literal god for crying out loud. And his supposed death occurred right before the events of the Civil War era in Marvel. But that didn’t stop us from seeing “Thor”, as Tony Stark, Reed Richards, and Hank Pym used a piece of his hair to create an android replicant of the Norse god of thunder. This cyborg could do just about anything the original Thor could do, which was bad for the anti-registration heroes. The first battle the Thor cyborg was in marked a turning point for the Civil War, as it literally blew a hole through the chest of Goliath. Reed Richards attempted to make some adjustments to its programming, but during the final battle, Hercules smashed its head in. The Greek god saved the day from that threat, but things didn’t get better after the Civil War era ended. The post-Civil War era gave us a new Avengers team, totally opposite to that of the rival Secret Avengers still opposing the Superhuman Registration Act. This new team, called the Mighty Avengers, had Iron Man and Captain Marvel as team leaders. But to be the new Avengers for the country, they needed some heavy-hitters.

Other members of the Mighty Avengers included Wonder Man, the Wasp, the Sentry, Black Widow, and a particular Greek god. Who better to be the new Thor on this new Avengers team than Ares? According to Tony Stark, he actually had Ares in mind because he felt like their team needed a Thor and a Wolverine. With Ares being an actual immortal god and having a much more brutal fighting style than Thor, he was the perfect candidate. Both Iron Man and Captain Marvel found him working as a construction worker in his human identity and “offered” him a place on the team. After brief consideration, Ares would eventually agree. Who wants to get deported back to Olympus, after all? Ares would go on to serve on the Mighty Avengers and during the Dark Reign era, the Dark Avengers team. He was manipulated by Norman Osborn into leading an assault on Asgard, where he was brutally ripped in half by the Sentry. That’s some pretty nasty stuff right there, perhaps a little too nasty for Marvel’s standards. That’s something we would probably never see in the MCU, but could we still see see Ares make his debut? I would say yes.

Who do we know is debuting in the upcoming Thor: Love and Thunder? It’s a very stacked cast of characters, but the biggest surprise is Russell Crowe joining in as Zeus. Whoa, now things are getting very interesting. After Thor: Ragnarok, the entire realm of Asgard was destroyed and its people have made Earth their new home. The future of Chris Hemsworth’s Thor is up in the air, but after Love and Thunder, Natalie Portman will be lifting the hammer to be the new mighty Thor. The MCU will be short on Norse gods, but that only means the door is open for more gods. If the Norse gods are no longer around, then the Greek gods will surely offer some of their strongest champions. Zeus is coming, and I have a feeling his sons won’t be far behind. Hercules is the ideal choice, given his empathy towards humans, but I can see Ares debuting before him. This could set the stage for a great rivalry between the Norse and Greek gods in the MCU. In this case, Thor and even Jane Foster could find an enemy in the battle-seeking Ares. He might not even have to be an enemy, but a friendly rival.

But of course, this is where Ares and Hercules need to step in and have that sibling rivalry conflict. After seeing how these two meathead brothers duke it out, maybe Thor will realize his rivalry with Loki wasn’t all that bad. That would really set up an interesting dynamic between these god characters. Thor might be totally unaware of these new gods existing in the MCU and that will be a fun interaction. Let’s not forget there’s a new Avengers team on the way and they’ll need another Thor to balance things out. Every team is stronger when you got an actual god on your team. What are your thoughts, Marvel fans? Do you think Ares or Hercules will make their debut in the MCU in the near-future? Let’s just see what happens after Love and Thunder, because I’m beyond excited.