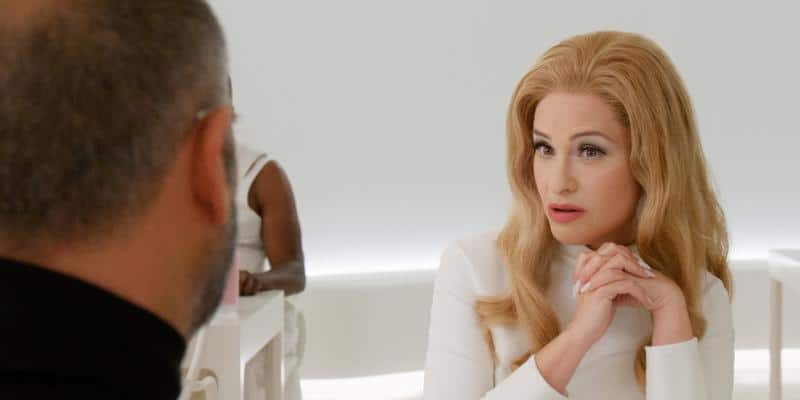 It doesn’t quite feel like the finale should have come this quickly, does it? The Death Valley portion of Double Feature feels as though it danced back and forth between time periods so quickly that there wasn’t a lot of chance for people to gain their bearings before the endgame was being put into play. But that’s how it is, since The Future Perfect is in fact the end of season 10, and the future did in fact meet up with the past in a startling but very meaningful manner. The only thing about this is that the future has become a very scary proposition since the gloves are off and the reason the aliens came to earth in the first place is revealed, but it’s not much of a surprise. If anything, it allows AHS season 10 to go out in a silent but deadly fashion that might very well have huge ramifications moving forward if the seasons to come are going to integrate into the larger world of AHS, as has been done in the past seasons. If that happens, then Apocalypse was only a taste of what could possibly happen.

The sad state of Troy and Cal was decided in the episode when the attempt was made to bring yet another hybrid baby into the world, only to find that it was highly aggressive and ready, willing, and highly capable of killing whoever it came upon. It was also revealed that the personnel for the hidden location are completely expendable, as the soldiers who killed the child were executed shortly after the incident, or rather ‘promoted’ as was stated. That left only Jamie and Kendall, who were bound to worry over their friends, and were of course distraught upon finding them both dead and left on the moon landing site. Kendall’s defiance in the face of what they were forced to endure was admirable as she and Jamie were each strapped to their own tables while giving birth, but woefully misplaced as Jamie’s child was born and found wanting, meaning it was killed, with Jamie following soon after. Kendall’s child on the other hand was seen as the success that the aliens had been hoping for, and in what can be stated as bizarre but somehow practical, Kendall’s head was removed and replaced with what could only be an artificial brain, which would keep her body working in order to provide more children.

And if that wasn’t enough, it’s revealed that there’s ANOTHER alien species living among the humans right alongside the one that’s already set on taking over, and they don’t care. The plan is to essentially strip the planet of humans, eradicate and replace them all, and then go on living for the species. Mamie Eisenhower ends up finding this out the hard way when she attempts to kill the hybrid baby that Kendall gave birth to, only to discover that this is the future, the goal that the aliens were moving toward, and that Calico will be the one that will be given the chance to nurture and care for the next species that will be set to take over at one point. It certainly sets a bleak picture for humanity, especially given that there doesn’t appear to be any glaring weakness to the alien species, other than the fact that they’re not plentiful and that they need a home to call their own. The downfall is, they want to call earth their home.

It’s fair to say that if a person has any qualms about trusting the government, this season AHS, Death Valley at least, would only exacerbate them in a very serious way, even though there’s definitely a comedic note that goes along with the overall story. It’s kind of easy to admit that seeing Nixon stretched out on an operating table to receive a probe if he doesn’t resign is kind of funny in a very dark and disturbing sort of way. But then, that’s kind of what season 10 has been all about, and while there have been moments that are more WTF than anything else, there are also moments that were shocking to the point of being mind-blowing. Compared to other seasons, this one almost felt as it was designed to bring everything to the surface without really going that deep. In a sense, Red Tide sets the pace when it comes to the things that the tide brings in.

Death Valley took another direction obviously as things went from being above ground and seen to being underground and hidden, performing a serious flip from the opening half of the season. But to be honest, it was fun, it was engaging, and it was a serious switching of gears that forces the viewer to drop one story in order to focus on the next. It’s something that AHS hasn’t done a lot of without connecting the different elements, but it’s different enough that people are bound to anticipate the coming seasons in a big way.