Home
Television
Yellowstone
Yellowstone: “Under a Blanket of Red” Recap 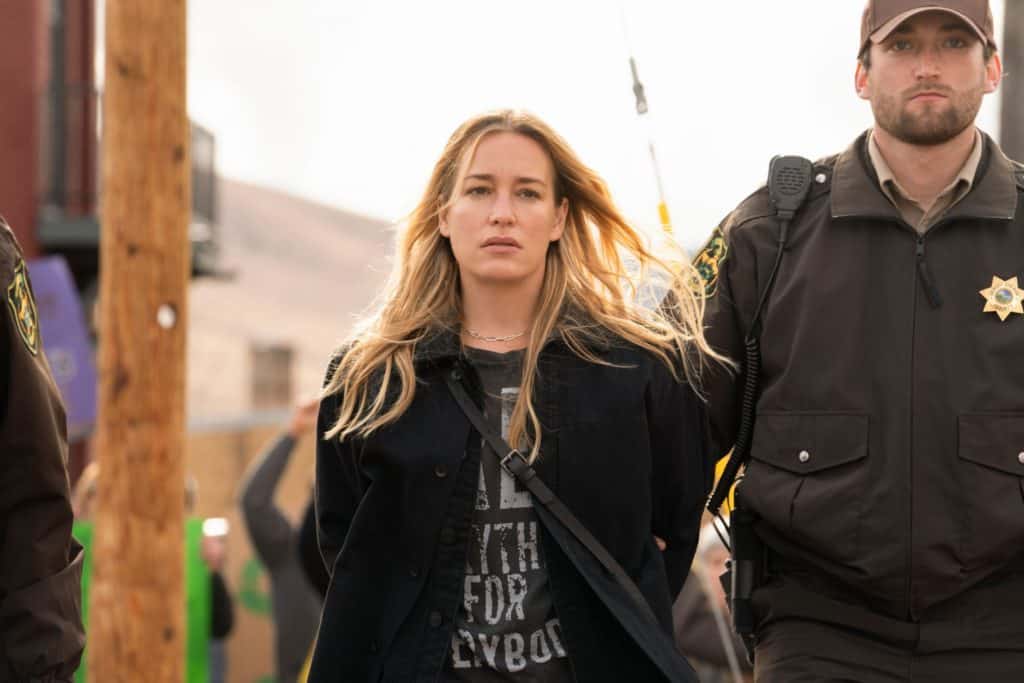 The Duttons appear to have made a bit of a comeback, but plenty of things are still simmering since peace, despite the desire for it, isn’t a natural state that Dutton’s appear to live in at any given time. While John is overseeing his family and his ranch as much as he can the rest of the family have their own issues to look after. Beth is taking no prisoners as her appointment to Market Equities emboldens her to fire her former boss and gain the revenge she wanted. Jamie appears to be on the warpath when he finds out his biological father was the one that helped to order the hit on the Duttons, but it would appear that his father has no fear of what was bound to happen, which makes him feel like an even bigger danger since there’s no telling just how far he’s willing to take things to get whatever he wants. But Jamie learning that his former campaign manager from season 2, something that a lot of people forgot, has returned, and brought their child with her, is bound to be a huge deal since if anyone remembers, Christina left Jamie, saying that he needed to become his own man and to get away from John Dutton.

Given that Jamie knows that his biological father, Garrett Randall, ordered the hit on the Duttons, and is slowly surely gravitating back toward them, it makes a person wonder just how this is going to work, or if Christina will take off yet again if Jamie decides to side with the Duttons again. This is the kind of story development that makes it easy to wish that the fourth season was being released all at once, but of course, it would kind of spoil any and every surprise that’s been coming. One big surprise that updates the show in a way is the fact that protestors were seen outside of Kayce’s office doing what protestors have been doing for a number of years now, which is spreading a message and being a general nuisance at the same time.

Protests are all well and fine since it shows that people are willing to stand for something, but when Kayce seeks to move people out of the way, as they’re blocking the driveway, the expected response comes in the form of rocks being tossed and people becoming belligerent. Piper Perabo appears to be leading the charge in this episode as she’s arrested along with a few other protestors on the word of John and Kayce Dutton, though John does bail out Summer, Piper’s character, in order to better explain to her what she’s protesting against. While Summer doesn’t necessarily trust John, she does go on a ride with him, during which they discuss the state of things, such as life and their own perspectives, which was kind of unexpected. In the meantime, things on the ranch aren’t getting better, but they are moving forward as Lloyd is still being put in his place by Rip, who’s reminding the old cowboy how badly he messed up by assigning him menial duties that are more or less an embarrassing way of reminding Lloyd that he’s not bigger than the ranch. For his own part, Lloyd apparently has to swallow a lot of pride as continues to stand apart from the rest of the group.

Carter on the other hand is being treated worse than a hired hand as Rip is making him pay for the fact that he upset Beth, which feels a bit petty since it might be wiser for Rip to remember that he was where Carter was at one point and was treated just as shabbily, if not worse since according to the flashback that was shown a while ago he wasn’t given a whole lot of respect. But his intent does make it clear that he wants Carter to earn it, even if he tells him that such a thing won’t ever happen. However long it might be until Beth comes around and realizes that Carter isn’t a pet to dote on and that he needs a stable adult presence in his life, it’s fair to state that if it does happen that Carter might decide that he’s better off on his own, or that he has no other option than to do as he’s told.  Things are churning once again as everyone in the mix is stirring the pot in their own way, making it clear that another confrontation or two is going to come before the season is over, and well before the story of Yellowstone is done with. Who’s going to be left standing at the end is anyone’s guess, especially since those that are standing at the moment have already proven that they’re exceedingly hard to keep down.