Home
Television
Yellowstone
Yellowstone Is Coming Back Sooner Than You Think 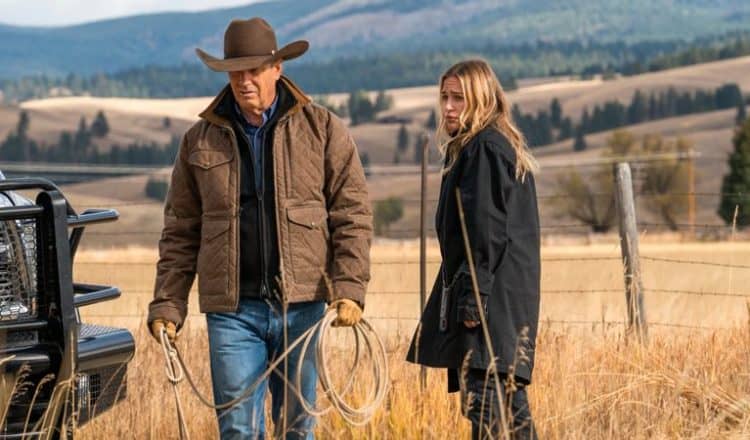 Yellowstone season 4 didn’t exactly slow down, but it wasn’t nearly as explosive as the season before it when the finale came around. But that doesn’t mean that things aren’t looming on the horizon as Kayce is facing one of two paths that will lead to the ruin of his family or something else that might be beneficial, but just as ruinous in another way. In the meantime, Beth is making moves that aren’t just angering those around her but are securing the leverage she needs against those that have decided to stand against her family. As dysfunctional as the Dutton family is, it’s been seen that they tend to pull together to fight the common enemy. There are plenty of enemies that the Duttons have had to stand against, but sometimes their greatest enemies come from within the family. Jamie has been one of the biggest threats to his own family, while even Monica, Kayce’s wife, has been a detractor that wants to pull away from John Dutton and his influence. Everyone has their reasons for wanting to see the Duttons fall, and more and more, it would appear that for all their tricks, the Duttons aren’t going to survive the onslaught.

The show is going to continue this coming November, so while there’s still a while to wait, it’s not nearly as long as some might have expected, and on top of that, the prequel, 1932, will be headed to streaming in 2022 as well, perhaps just a short while after Yellowstone returns. The Duttons and their legacy have been fun to watch thus far as Yellowstone came out as a story about a family that had been dominant in Montana for generations, but were being made to pay for their excesses and any possible grievances that had occurred before their time.

Talks of who did this to who way back in the day and why people in the current era have to pay for the sins of their ancestors is rather common in this show and has served as a way of connecting to the real world in a way that made this show even better since it took hold of current events and societal beliefs and issues that a lot of the world had come to understand and had been dealing with for a while at that point. The fight between the Dutton clan and everyone trying to move in on them made for strange allies at times, but it also has made for a great story since the many different developments have been fun to watch. From the kidnapping of Kayce’s son Tate to the elimination of rivals and those that have tried to take the Dutton’s land, things have been spiraling out of control for the past four seasons, and it would appear that season 5 might be the last, or it might be the prelude to something that will see a reconciliation of those that have been at odds with each other for so long. It’s been hard to tell who to root for at times since no one has ever managed to cover themselves with glory and righteousness. In a big way, it’s been about siding with the lesser evil in this story, and learning that even the self-righteous aren’t as great as some might want them to be.

The upcoming season is bound to be even tenser since it’s likely that John will be forced into a deal or an unreasonable defense as the people seeking to make his life difficult are pressing in with the kind of pressure that’s going to break him or create an even bigger danger that will make those attacking him think that he’s cornered. A cornered animal is usually the most dangerous, however, and it almost feels that as tired as he is and as ready as he is to just lash out, John might have something up his sleeve that hasn’t been revealed yet, and his biggest trick is still to come. As far as Beth goes, she’s playing with fire, without any doubt, and she’s perhaps the most dangerous individual on the show since it feels likely that she’s going to unload something at any given time, likely the right time, that will either crush the opposition and halt them in their tracks, or will ruin the family in a way that won’t leave much, if any, room for recovery.

One almost has to feel sorry for Kayce since all he’s wanted is to protect his family and live a simple life. Some might think that his wife Monica is a pure and kind woman, but the truth is that she’s someone who’s dragging him in a different direction, and he’s bound to go since he loves her. But in the end, one has to wonder how strong those family ties are going to be.