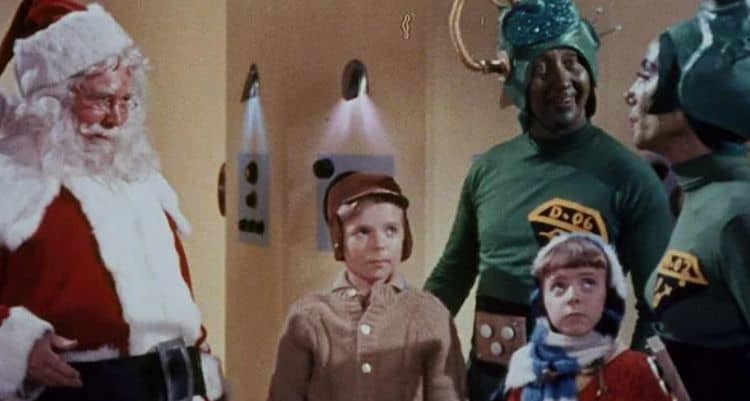 Released in 2007, many people thought that Fred Claus had the potential to be a success. Unfortunately, that didn’t end up being the case. The movie was a major flop. Apparently, no one was interested in a story about Santa and his trouble-making brother. On top of that, Fred Claus does the opposite of getting people into the Christmas spirit which was part of the reason why it didn’t perform well. A reviewer for WNG wrote, “But the biggest problem with Fred Claus isn’t that it’s not very good, it’s that it pulls a bait-and-switch on parents expecting to see Hollywood’s favorite bad boy in a film they can feel comfortable taking their kids to”.

9. Rudolph and Frosty’s Christmas in July

Rudolph and Frosty are easily two of the most famous Christmas characters of all time, so it’s easy to see why Rudolph and Frosty’s Christmas in July seemed like a good idea on the surface. In reality, however, the crossover was a failure and proved that these two stars shine brighter when they’re by themselves.

8. The Santa Clause 3: The Escape Clause

The first Santa Clause movie is widely considered a 90s Christmas classic. However, we all know what happens when people get carried away with the sequels. By the time the third installment came around, more than a decade had passed since the original. Even though the movie was a success at the box office, it was terrible. In fact, it was nominated for five Golden Raspberry Awards which are specifically given to bad movies.

Released in 2004, Surviving Christmas is a romantic comedy starring Ben Affleck. Surprisingly, though, even having his name attached to the movie wasn’t enough to make it a hit. The film didn’t connect well with viewers and it currently has just a 7% rating on Rotten Tomatoes.

During the early 2010s, Grumpy Cat was probably the most famous cat on the internet. As with most other things, though, people got a little too carried away. Grumpy Cat’s Worst Christmas Ever was one of the results. Not only was it a movie that no one asked for, but when it finally came along people realize that they didn’t want it.

Released in 1964, Santa Claus Conquers The Martians is out if this world – literally. The movie is set on Mars and centers around the planet’s children who are lazy and depressed after consuming too many shows from earth. A martian named Kimar gets the idea to kidnap Santa Claus and bring him to Mars to help cheer the children up. However, two earth children are accidentally kidnapped in the process. Almost all of the reviews for the movie are bad, and it’s clear that it fell flat in every aspect.

Not to be confused with the 2021 Netflix movie of the same name, Elves was released in 1989 and it has since been forgotten by many. The movie tells the story of a woman who finds out she is part of a dark experiment that involved breeding humans and elves. The only thing that can save her and the rest of the people involved is Santa Claus. If you think this plot sounds ridiculous, you aren’t alone.

In general, it’s not a good idea to judge a movie by its title, but a title with a title like Santa With Muscles it’s kind of hard not to. Sadly, the movie itself is just as bad as the title and not even Santa’s muscles were strong enough to push this movie towards success.

Kirk Cameron’s Saving Christmas is all about teaching viewers how important Christ is to the holiday season. For some reason, however, the movie rubbed a lot of people the wrong way. In his review, Peter Sobczynski of RogerEbert.com wrote that it is “the only Christmas movie I can think of, especially of the religious-themed variety, that seems to flat-out endorse materialism, greed and outright gluttony.”