Home
Entertainment
News
Why You Should Consider Watching “Caution, Hazardous Wife: The Movie” 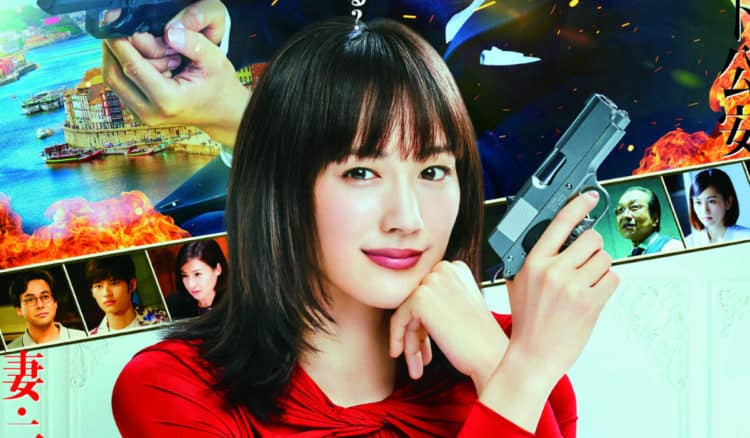 Quite honestly this looks like a different version of Mr. &  Mrs. Smith since the story is slightly different but a lot of the elements are still there. It would be great for a ripoff article no doubt, but the fact that the wife in this movie has amnesia at first is kind of interesting since then it takes on a similar element from The Long Kiss Goodnight. There are probably a few other elements that could be likened to other movies, but trying to find them all isn’t the goal at this moment since the title almost made it sound as though the wife was going to be the main point when in truth it would appear that both wife and husband are torn when she gets down to work. Hounded by people who want to kill them both, it’s a definite thrill ride it would appear since it looks to have plenty of action to go around and should be something that people might enjoy if they did like a few other action movies. It does feel that others would claim that it’s a ripoff as well though.

Trying to be entirely original these days is kind of tough as there are a lot of stories out there and trying not to copy any of them and trying to do something entirely new is a little difficult given that one element is almost always going to lead to another that people will recognize since otherwise, it might feel as though the story is getting a bit nonsensical and not conforming to the rules the way people want to see. It sounds funny to say that any movie that tends to break out of the mold is going to alienate anyone, but the plain truth of it is that people might like new things, but only if they end up conforming to what they want to see.

It’s entirely possible that this movie will maintain a balance of action and drama as well as comedy since the trailer already makes it apparent that it’s not going to be entirely serious the whole way through. But there will be enough drama since it is a movie that’s about a man and a woman that are together and are attempting to find a way to reconcile their feelings while being told to kill each other by their respective bosses. That being said, one can only imagine how things are going to go once it really gets started. In this movie though the wife appears to be a little deadlier but the husband isn’t exactly a slouch, though he does appear to be outclassed in a way. If the movie ends anything like Mr. & Mrs. Smith though, one can imagine that they’re going to be getting together by the time things are all said and done. That’s the hope at least since it would appear that they don’t really want to kill each other, which is only bound to make things harder since it would appear that if they don’t kill each other that their bosses are going to do the job and probably turn on them next in order to get rid of them due to the fact that they disobeyed an order.

Movies like this tend to be a little more fun when it comes to spy and assassin movies since despite being insanely deadly and created with the idea that someone has to die, the feeling is still that there’s going to be a bit of whimsy tossed in along with a good amount of comedy since the situation can be irredeemably dark or it can contain a bit of fun that the audience can enjoy since it lightens the mood just a bit and allows people to have a good time with it instead of taking everything too seriously as they become emotionally invested in one character or another. Sometimes an action movie has to lighten things up just a bit with a laugh here and there to make it flow just a little better, or perhaps add in something that’s not supposed to be funny but is bound to elicit a chuckle anyway due to the fact that it’s a little ridiculous.

All in all this movie looks like it might be a good bit of fun just to watch but not something that’s going to be taken that seriously. If nothing else, it could be a good movie to put on at the end of a busy week and just enjoy without having to get into why certain things can or can’t happen. Action movies of this caliber are usually more fun to watch and get a good laugh out of while at the same time becoming at least a little bit invested in the characters so that the experience is just a little better.