Home
Movies
10 Things You Didn’t Know about “The Warriors” 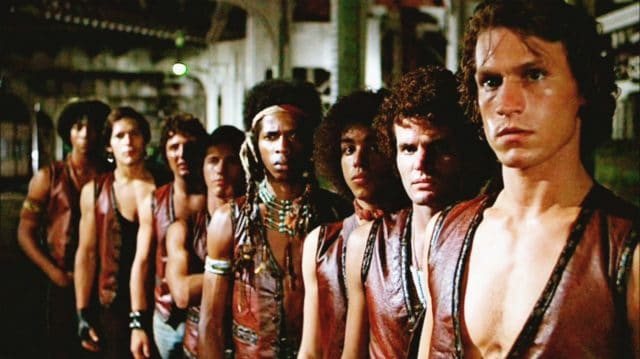 At the time of its release The Warriors was thought to glorify gang violence and was initially pulled from many theaters to prevent people from thinking that running with a gang was a preferable lifestyle. At that point the movie was for the most part reviled and destined to sink into film history without so much as a whisper. But throughout the years more than a few people have come to understand that while the film does depict gang violence and is in fact a rather disturbing movie on some levels, it is also a redemptive piece as well. The Warriors is about a gang attempting to clear their name after being falsely accused for the death of a noted personality that has heavy influence in their world. To this date the movie is looked upon with more interest and introspection than anything.

But how much do you really know about the film?

10. The story is based on Greek text.Â

Despite the difference in time lines and settings the story of The Warriors is in many ways like a Greek tragedy in which a band of warriors must fight through insurmountable odds to return home once again.

9. The Baseball Furies were inspired by KISS.

The director was quite fond of the band KISS and wanted to blend America’s favorite pastime with his own passion so the Baseball Furies were born.

8. The novel is a lot more depressing than the film.

In truth the book was a lot darker than the more upbeat film and the author wasn’t too happy to see his creation turned into something that was far and away from what he’d written.

7. The film uses real gang members as part of the production.

Some gang members were used as protection while others were used as extras. This still didn’t keep the crew and the set safe at all times as many other gangs were notably offended at the production and how it was treating their turf.

6. It had an awesome soundtrack.

The soundtrack was designed to keep up the tempo and was among the first to use a synthesizer to create the kind of energetic tone that the film needed.

5. It had a comic book series that filled in plot points.

As of now the comic is online and should be easy to find, but it occurs after the events of the movie. The gang attempts to free Ajax and the individual members continue to develop after returning to Coney.

4. Robert DeNiro was supposed to have a part.

It’s not really certain why he was never cast in the role of Cowboy but the rumors are that he simply passed on it or that the director didn’t want him there. In truth it would have given the film the star power it needed.

It’s been reported that the original actor that played Fox was increasingly difficult to work with and was eventually fired. The stand-in did as much as possible to cover up his face before Fox was killed off.

2. Tony Scott planned on making a remake before his passing.

There was a script in place and the idea was moving ahead, but then Tony Scott was diagnosed with inoperable brain cancer, and he took his life not long after.

1. The most famous line in the movie was improvised.

David Patrick Kelly had to really dig deep and find a way to make this scene work, and it seemed that finding that necessary taunt to bring the warriors out was the simplest thing in the world. He used the same kind of taunt you would hear from a child in the schoolyard.

Did you know The Warriors as well as you thought?

Whatever Happened to Mike Meginness From My 600lb Life?