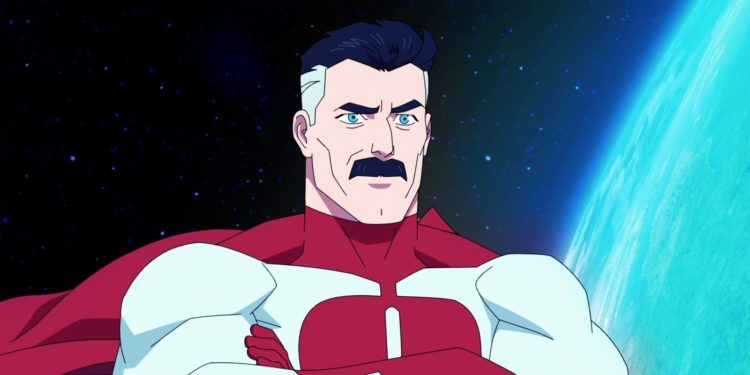 There are several other comic book characters heavily influenced by Superman. Two of them are Omni-Man from the Invincible comic series and Homelander from The Boys. What do these two super-powered heavy-hitters have in common with the Big Blue Boy Scout? Well, both of them have a cape, like Superman, have super strength, super speed, can fly at crazy speed, and are basically invulnerable. Superman has the kryptonite, but as for these two anti-Supermen, so to speak, their weaknesses are limited. The only way to defeat them is by getting someone stronger than them. But if these guys are on Superman’s level, then that’s no easy task. Speaking of which, can you imagine if Omni-Man and Homelander somehow, some way crossed paths and had one, big, and totally epic battle? Oh boy, that would be a banger. The first season of Invincible was killer fun from this year and I really do mean killer fun. It’s a show based on a comic book series, but believe me, it’s not kid-friendly. Okay, so let’s talk about season three of The Boys for a second. We unfortunately didn’t get it this year, but that’s okay. All the details we have gotten about it so far has been very exciting and after seeing how the last season ended, I think we’re in store for another awesome season.

Something that stood out from season two of The Boys was seeing how Homelander further descend into deeper madness. We actually got to see him lose by the end of the season and it has taken a heavy toll on his sanity. This means he’ll return in season three more dangerous than ever and will be on the hunt for Billy Butcher and his team. I am so stoked to see that, but just read the comics. If you think the show is bloody, you may want to avoid the comics if you have a weak stomach. You can stick with the show, but if you do like The Boys, then you’ll probably like Invincible on Amazon Prime. For one, it’s animated, so they can get away with some seriously bloody action scenes. It’s fun to watch, but again, if you have a weak stomach, it might not be for you. But something about Invincible that is for everyone is J.K. Simmons voicing Omni-Man, the father of the titular character, Invincible. Seriously, first J. Jonah Jameson, then Commissioner James Gordon, and now a supervillain who is basically an evil Superman? Holy smokes, Mr. Simmons is just stacking the resume for nerd fanbase.

Hey, that’s good for us, but let’s not forget that Robert Kirkman still wants to do a live-action Invincible movie. I’m all for it, because the comic series has a cast of colorful characters. By far, the best character in the series is Nolan Grayson, better known as Omni-Man. From the start of the series, he came off as the world’s greatest and most powerful superhero. But by the end of the first episode, we learned that he his actually a cold-blooded killer. Sounds a lot like Homelander, doesn’t it? It’s no question that these two characters are both in the same field. The fact that they’re basically darker versions of the heroic Superman just cements their place in that category. Since they’re both in that category, we just have to ask ourselves if Omni-Man could beat Homelander in a super powered beatdown. The answer, at least in my opinion, is yes. It would be a very awesome battle and probably a close fight, but I’d still have to give the win to Omni-Man.

So why him? Well, let’s start with the other characteristics they have in common with Superman. Their flight, strength, speed, and invincibility are the main powers in their arsenal. Like Superman, Omni-Man comes from another planet, except his home was never destroyed. His people are also a far cry from the Kryptonians. Omni-Man is a member of a race of very powerful humanoids aliens called the Viltrumite. Their sole purpose is conquest, which led to them sending Omni-Man to Earth to pose as one of its greatest superheroes. He didn’t expect to find a wife and have a son, who he eventually decided to train as a superhero when he turned seventeen. If you watched the animated series, you know how it all turned out.

Omni-Man and Invincible got into a bloodbath of a battle and it ended with his father nearly killing him. The last we saw of him, he fled from Earth, seemingly ashamed of all the destruction he caused. This all sets up for a very interesting story for season two. If you’re familiar with the comics, you may already know what happens, but I won’t give anything away. I’m excited to see where the story goes from there, but by all means, give us more of J.K. Simmons as Omni-Man. I’ll definitely take a live-action version of him, but should it be J.K. Simmons? Maybe not, but we do know that Anthony Starr absolutely kills it as Homelander. Like, literally.

Homelander doesn’t come from an alien planet, but you know what he does have? Heat vision, much like Superman. That’s something Omni-Man doesn’t have, and it is an advantage. However, I think the real deal-breaker is the difference in their experience. While Homelander is used to fighting common criminals and the occasional rogue super criminal, Omni-Man has literally battled all kinds of threats. This includes your typical common criminal, several supervillains, and big monsters from different worlds. And let’s not forget, he actually destroyed a whole planet of hostile aliens because they tried to invade Earth. To him, that was just another walk in the park. Has Homelander done anything like that? Not even close.

I truly think that is the critical factor if they were to duke it out. Sure, Homelander would still put up a good fight, but in the end, the experience Omni-Man has means fighting another super-powered individual is just another fight to him. And yes, they’re both dangerously ruthless characters, but Omni-Man was ready to beat his own son to death. Not even Homelander tried that. I don’t think even his heat vision would be enough to hurt him, but he can go toe-to-toe with him. But with how brutal Omni-Man can be, I just don’t see Homelander surviving that fight. Sounds like even Billy Butcher would dig it.