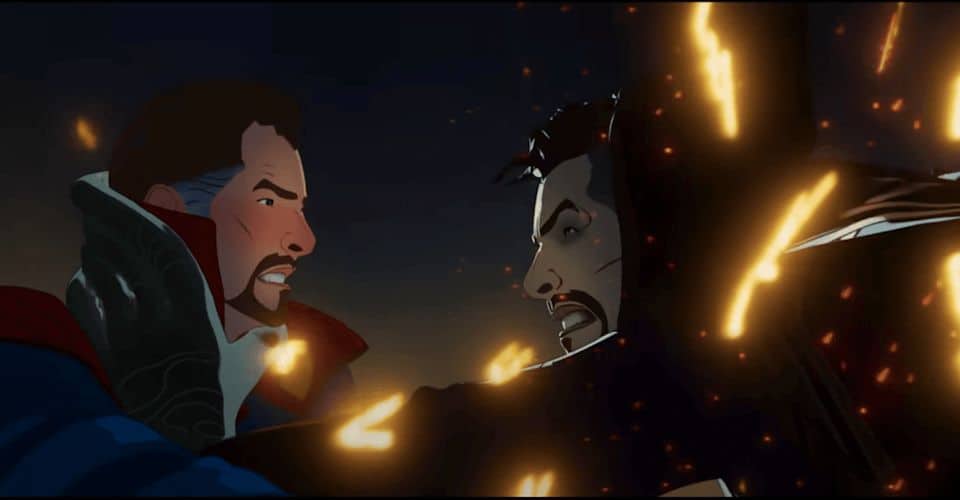 Obviously we’re not talking about Strange’s literal heart here, since that might be interesting, but it would also be kind of difficult to get into. Still, the loss of Christine Palmer, the woman he loved so dearly, had huge ramifications for Dr. Stephen Strange, who started out as one of the most arrogant characters in the MCU and became humbled after a while through his many different trials. But as it’s been seen in this episode of What If?, the loss of someone he held dear became too much for him as it forced the Ancient One to split his timeline in two as one aspect of Strange would allow his grief to overtake him and cause him to seek out the lost library of Cagliostro to seek the power he would need to bring Christine back. The danger of course was that her death was an Absolute point in time that, if disrupted, would threaten the fabric of the entire universe. Oh, I should have said spoilers by now, right? Well, moving forward, let’s just say that such a thing should be expected at this time.

Just imagine the Sorcerer Supreme giving into his grief though, and then realize what he might go and do if he became, once again, the arrogant and reckless individual he’d been before his accident. When Strange lost the use of his hands, he was insufferable and still did his best to control the world around him as much as he could. When he lost Christine, there were two pathways open to him, and the unfortunate result of this was that the dark, arrogant side became much stronger by learning how to summon and then absorb the darkest, most violent spirits that could grant him the power to break the Absolute point and bring Christine back to life. Unfortunately, the consequences of this became so dire that despite the warnings, the darker aspect of Strange grew too powerful and the result was the eventual breakdown of his universe.

Interestingly enough, as the dark version of Strange grew even more powerful he started to sense the Watcher, the individual that is narrating the series and is tasked with observing each story. The Watcher knew what was going to happen, but could do nothing to stop it, as his role is to observe and nothing else. It’s hinted that the Watcher could in fact stop the events from happening, but then one has to wonder what might happen if he did decide to mettle in the affairs of the splinter universe. In the Marvel universe, the Watcher, known as Uatu, is only one of many such beings who are tasked with watching every aspect of what goes on in the multiverse, and it’s been surmised that their power is immense and that they could possibly halt the advance of certain realities if they felt the need. But apart from Uatu, it’s been established that the Watchers will do nothing since they are there to watch, as you could guess from their title, and are bound to do nothing else, even if they could. When left to his own devices though, Strange begins to unravel as a human being even as the universe begins to unravel around him.

The other aspect of Strange’s being however, acts after being alerted by the spirit of the Ancient One, and attempts to confront his darker half, to no avail. The fight is an impressive one and does show the power that each version of Strange possesses, but the sorcerer’s darker half has grown too strong, and no protection spell or artifact can stop him, as he annihilates the cloak of levitation and then breaks the defensive spells of his counterpart before absorbing him as he did so many others. That wasn’t the main problem, however, since once he did resurrect Christine she not only rejected him, but it ended up destroying the universe as well, forcing it to unravel as even the accumulated power that Strange had gained wasn’t enough to keep things from imploding. At that point, Uatu showed up again to tell Strange of how badly he’d messed up, and how his quest for power to change what shouldn’t be changed had ended up destroying his universe, and everything in it.

Out of all the stories thus far this is the most dire since when one really thinks about it, Doctor Strange deals with such an enormous amount of power and responsibility that tipping the scales in one direction or the other is a huge mistake that will have disastrous consequences for everyone involved. Not even some of the most powerful cosmic beings in the MCU or in the Marvel universe could do this much damage if they tried, and in fact, even Thanos with the Infinity Gauntlet might not be able to do this much unless he wished for the end. This kind of proves that Doctor Strange is no joke when it comes to the power he holds.