Home
Television
What If
What If…Thor Had Been an Only Child? 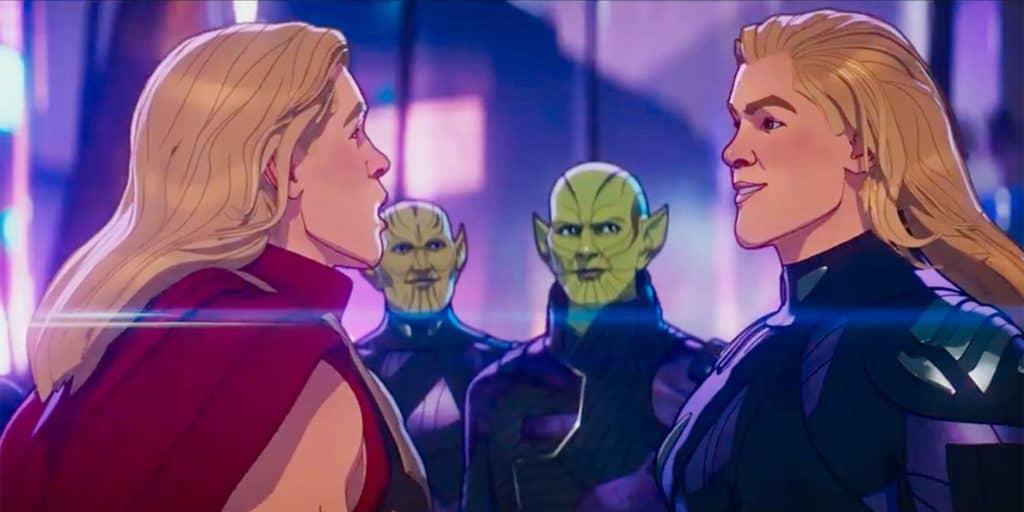 It’s easy to agree with this episode but it’s still easy to pick out the virtue-signaling and the fact that someone on the writing team is likely pushing a slightly ‘woke’ agenda into the What If…? series that is still fun and enjoyable. This time around the idea that Thor was allowed to grow up as an only child makes it pretty clear what people believe would have happened, since not only would Loki have stayed with the frost giants, but Thor would apparently become spoiled and unused to being responsible. But turning him into a party animal without any common sense and then showing him being given a verbal dressing down by his mother in front of Captain Marvel is enough to make a person roll their eyes as the idea that Thor is a big, spoiled, party-loving brat kind of flies in the face of a lot of things that have already been shown in the MCU. It’s definitely true that he was vain and full of himself at one point obviously, there’s no dispute there. But the fact is that this still makes him look like an oaf that had no sense at all.

Again, I can’t really disagree with the assessment, since he was having a good time, as were those that he invited to planet earth. In fact, even the humans of earth were having a good time, but SHIELD was concerned that he was going to end up destroying the world with his wild party. The sad thing is that once it was revealed how he ‘destroyed a world’ the explanation showed that not enough research had gone into the event and while Thor was still being irresponsible, it wasn’t the cataclysmic event that SHIELD had made it out to be. This episode became a little bit silly partway through but it was still fun to the point that it made light of having several different species on earth such as the Skrulls, the frost giants, Nebula of all people, and even the Grandmaster serving as the DJ for the party.

Of course, once Thor’s mother, Frigga, found out that he wasn’t where he was supposed to be, her involvement hit the OFF switch on the party as Thor had to go about cleaning up his mess as well as those of others, though he did have a little help at least since Surtur managed to fix the damage he’d done to the Statue of Liberty, and the frost giants returned a Ferris wheel to its proper place before making a quick exit. Captain Marvel even chipped in by trying to help cover for Thor on Asgard when Frigga finally showed up. The ruse did fall apart when it was made apparent that Thor hadn’t been staying put, but things still appeared to go back to normal, at least until Thor noted a robotic army appearing in the same desert where he showed up in the first movie. The appearance of Ultron, wielding the Infinity Gauntlet and apparently having assumed Vision’s form, brought the ending to a screeching halt, marring what might have been one of the more positive endings in this series to date.

The battle between Thor and Captain Marvel was kind of fun to watch since it shows that both of them were insanely tough, especially since the lightning that Thor tried to use against Carol did nothing but feed into the power she already had. One thing that was amusing though happened when Thor finally knocked Carol down and placed his hammer upon her stomach, making it impossible for her to rise since apparently she wasn’t worthy in this version. But overall this was perhaps the goofiest episode in the series yet, especially since Thor was portrayed in a manner that didn’t really make it known that he might have experienced other hardships along the way while growing up in Asgard as an only child. No matter that Loki managed to pull one prank after another and likely was the bane of Thor’s existence at times, it does help to think that with his absence that Thor might have felt the need for companionship every now and then since his and Loki’s relationship wasn’t always bad in the Marvel universe.

The finale for what will hopefully be the first season of What If…? is coming up pretty quickly, and so far it’s been a wild ride into the different timelines that could have occurred had one small thing happened here or there. One has to wonder if Disney will be interested in bringing this series back since there are more stories that could be opened wide with different events that might send the MCU careening down very different paths. Until that point though, this series has delivered in a very interesting way.