Home
Movies
Making The Case for a Nebula Solo Movie 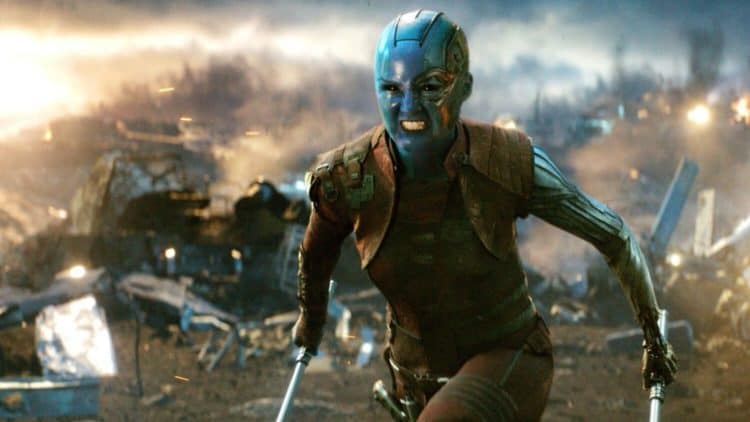 Some people might actually look at Nebula as a throwaway character that doesn’t have a lot of business being in the MCU at this point, but in truth she has a lot more use than some might give her credit for. Her arc in the Guardians of the Galaxy movie was a bit hard to get into really but her involvement in Infinity War and Endgame was kind of crucial since she made a big difference when it came to fighting against Thanos and alerting the Thanos of the past to what the Avengers were planning. One thing that a few people have noted was how she could have possibly held Quill back when he went to assault Thanos, thereby waking him from Mantis’ trance and allowing him to reclaim the gauntlet before laying waste to his opponents. In the original Infinity Gauntlet series Nebula looked quite a bit different as she was initially seen as a walking zombie kept around by Thanos as a type of punishment, though she had a very limited level of intellect that would allow her to turn the tables eventually. In the comics it was actually Nebula that ended up undoing everything that Thanos had done, as she used the gauntlet to reverse the mad titan’s actions. In the comics however the radiation issue wasn’t present and as such no one had to sacrifice themselves to utilize the weapon. This was even seen in the Avengers animated series, but it was interesting to note that the Russo’s decided to use the cosmic radiation as a factor in the movies.

Nebula does have her own story and is fairly interesting since she’s tangled with the Avengers in the past, though given how much has changed between the comics and the movies it’s fair to say that her history kind of begins and ends with Thanos and her other affiliations at this point. As the Russo’s have said, they’re not so much into translating the comics onto the big screen since people can look at the comics if they want that side of the story, but all the same this practice does manage to irritate a lot of comics fans who grew up reading said stories and wanted some continuity. Plus, when one looks at it in another way, seeing the old stories actually come to life would have been interesting since sticking to the story would have been just as exciting since the number of characters used in the original series was amazing. Even without those that were owned by Fox at the time there were plenty of characters in the MCU that could have been used as substitutes, but of course the Russo’s were going to do things their way. To be realistic things went just fine since Infinity War and Endgame ended up being massive hits. Nebula though was kind of a shock to see at first in Guardians of the Galaxy vol. 1 since some fans might have been expecting the blue-skinned, long-haired version that we saw in the comics so long ago, not the cybernetic version that we have now, that has also been in the comics but was not the original appearance she was given. Again, people have liked what they see so it’s not a massive issue.

But seeing Nebula in a standalone movie might be something that needs a little work since she doesn’t have a lot of pull in the comics on her own. She’s been a part of many story lines at this point and has been seen around plenty of high profile characters, but there’s still the idea that she’s kind of a sidekick, not so much a character that can stand on her own two feet. If given a story of her own though that might change since it could be shown that she’s not just someone that can be brought in and given an important arc just to be thrown away later. If that feeling persists it’s largely because her story was overshadowed by the massive amount of talent that was utilized for the Infinity Saga and she kind of got lost in the mix a few times. That’s understandable though since not only is Karen Gillan easy to gloss over with just about any other talented actor, no offense, but her character in these movies isn’t what many would call a major player. Giving Nebula a forum to show that, as an assassin, she is worthy of note could bring her a little more fame in the MCU and perhaps a lot more regard from fans. At this point she’s just a glorified cyborg that shows up when she’s needed, but given the chance to shine a little more it’s possible that she could show that she’s almost as deadly as her adopted sister, Gamora.