Home
Movies
Was That Superman Scene In Shazam! Bad? 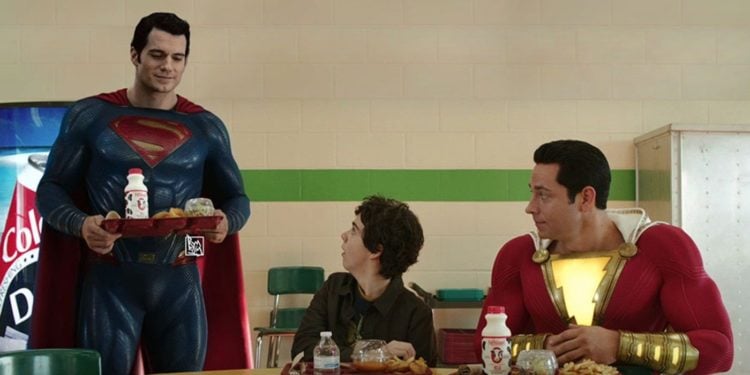 You know that quick little Superman scene in Shazam!; It’s less than 10 seconds long. After Shazam and crew save the world, the goofy superhero makes a nice visit to Freddy’s school, but he doesn’t come alone as Superman makes a headless cameo. Though if you want to count David Sandberg’s cut that hilariously showcases a visible, but long-necked Superman then sure. The point is that normal necked Henry Cavill wasn’t the man that made the appearance after being teased earlier in Shazam!. It was actually Zachary Levi’s stunt double in the Superman suit. Now, there are a lot of reported political reasons why Cavill wasn’t the man in blue and red costume. According to Jim Viscardi, Cavill did shoot footage for the Sandberg vehicle, but Cavill’s term as the superhero was up in the air as his DCEU contract needed to be sorted out in time.

Cavill was fresh off the disaster known as the Justice League, and DC notably wanted to distance themselves far away from the Joss Whedon picture as far as possible. Zack Synder’s whole universe was blown up following the failure of Justice League, but it wasn’t just the box office returns that likely stopped executives from signing him onto another feature as Clark Kent. There’s gossip and reports that Cavill is difficult to work with behind-the-scenes and that the relationship between him and the executives in the DCEU just wasn’t a good fit. Look, I won’t comment on these rumors because until the actual executives or Henry Cavill himself confirms stories like these then it’s all rumors and nothing more. The purpose of focusing on Henry Cavill is due to the fact that there was a black cloud hanging once the surprise cameo happened. That moment was all sarcastic fun, which strongly fits the tone and themes of Shazam!, but Cavill’s absence notably left a disappointing black mark. In retrospect, the Superman cameo was never necessary to begin with. I understand that DC and Marvel were looking to connect their universe by adding Cavill into the world of Shazam, but the gag overshadowed what was an otherwise great movie. Is Shazam! a bit pedestrian when it comes to origin superhero movies? Definitely, but the light-hearted and comedic tone of the picture was a refreshing return to form in a world that sees heavily intelligent and often dark comic book films.

Analyzing the scene itself, it’s a fun end to Freddy’s arc. He’s not the popular kid in school and everyone is clowning on him for his “fake BFF”. It’s a nice message that says Freddy now has a family who’s there for him when the group shows up. And Shazam popping to cease all the doubt about Freddy’s claim was a cool touch. The Superman thing wasn’t bad. Definitely cheesy, but again, the moment played into the overall tone of the film. Plus, this wasn’t some pivotal scene that played a role into the larger part of the story. It was a cameo. One that was built-up a little, but it wasn’t hyped as something major that would impact Shazam! or the DCEU entirely. Sure, the headless Superman may have caused stress for viewers who immediately panicked over Cavill’s future in the prominent role, but the scene is harmless, nevertheless. So, the question on whether The Superman scene is bad or not depends on the person. In truth, it’s not a bad scene. It nicely tied a bow around a little story arc while delivering some cheeky fun with the appearance.

David Sandberg and executives could’ve easily cut the cameo if they wanted to. They didn’t. Like I said before, adding Superman wasn’t vital to the overall big picture, but it was a fun little moment that came and went. Could this open the possibility of Shazam! Fury of the Gods to introduce the new Superman, like Captain America: Civil War brought in Black Panther and Spider-Man? Maybe, but considering the fact that reports are claiming that DC is looking to introduce a Black Superman, that’s going to be a difficult connection. Plans change and the cast hasn’t been confirmed as of yet, but following Zack Synder’s Justice League, it’s clear that there’s a new direction in store for the man of steel. There could be some fun made over Superman now being black as the humor would work in Shazam!, but it would probably be best to leave the first picture as just a cameo. The appearance of Superman didn’t ruin a great film, though those hoping for Cavill in the cameo might say so otherwise.