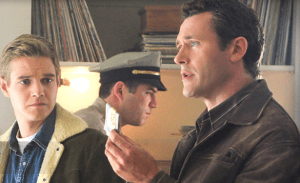 Tuesday night’s Vegas brought us to yet another casino on the Vegas strip and gave ADA Katherine O’Connell some depth.

The opening moments of the episode present a dress rehearsal for the Stargazer Casino, and not a very smooth one.  Director of the show Max Chandler rips into the girls’ lack of effort, and while this moment seems somewhat irrelevant, it comes back into play after one of the showgirls, Audrey Ballard is locked in, attacked, raped and murdered.

Over at the Savoy, Savino is proud of his latest accomplishment — getting high roller Clay Stinson to spend time in the casino.  Savino is determined to make Stinson feel welcome, hopeful that his enjoyment will attract other big names to the Savoy.  Things turn sour for Savino’s plan when Stinson requests to have the table limit lifted in the casino.  He raises his own bet to $500,000, and wins, forcing the house to pay him one million.  When Savino presents the payoff to the Texan, Stinson requests a night with Mia Rizzo — something that Savino will not let happen.

Meanwhile, Sheriff Lamb takes up the investigation into Audrey’s death, this time with Katherine suspiciously close at hand.  Max Chandler, who had been previously seen yelling at the showgirl confesses to having given her a three hundred dollar advance, and one of the other showgirls shares that Audrey just “wasn’t one of the girls.”  As per procedure, the Sheriff heads to the victims apartment and finds “You Shall Be Forgiven” written on her vanity mirror.  Later, Katherine brings in with information on another victim, another dancer, also strangled and left with a similar message.

The Lamb brothers take their investigation to a man named T.R. Thurman, publisher of Glint magazine, found in Audrey’s apartment.  With a very impressive move, pulling off the warehouse doors, Lamb breaks in and gets Thurman to hand over a list of mail-order customers, believing that a man could have taken special interest in Audrey.  Ralph leaves the man with a special warning to leave town — clearly not a fan of his ‘industry’.  While the men take up their side of the case, Katherine goes behind the Sheriff’s back to meet with the victim’s father, a priest.  Surprisingly to her, the man wishes to have nothing to do with his daughter, leaving money and asking not to be contacted again.  According to him, Audrey brought these bad things upon herself, yet, we have no indication as to why.  When the Sheriff finds out what she had done — going to meet with him with no support — she cries that they’re not doing enough; she can’t stand by and wonder what could have been done.

Back with Savino, Clay Stinson is getting ready to leave town with a good chunk of the Savoy’s change on him, but as Savino tells a concerned Mia, “some things are out of our hands,” including a stall keeping Stinson from moving his private car.

A forwarding address from Audrey’s father leads them to Chris Stengle — not a man, but rather a woman with whom Audrey was apparently in love with.  Instead of supplying that their relationship could be a motive for the murder, Chris tells the Sheriff that Audrey had been working on her own act with someone else from the Stargazer.

Katherine’s reasons for being so passionate about the case come out in a touching moment between she and Ralph.  Somewhat predictably, it’s revealed that there is rape in her past — a cousin of hers raped by a ranch hand, and not a word was ever said about it.  It wasn’t until the man hurt another girl that a young Katherine realized that she could have done something to stop him.

Believing that Audrey was working with the director, the Sheriff and Jack interrogate Max Chandler, formally, yet find out that she was in fact working with band member Gary Chase on a show to take to Broadway.  Under guise of needing more information, Katherine goes to speak to the man, only to be attacked when she tries to leave.  Thankfully, Ralph and Jack step in at the exact right moment and shoot him away from her.

Things wrap up well, albeit slightly confusing, for Savino.  He walks into the casino to find Mia playing poker with Clay Stinson, teasing and flirting…and winning.  After Stinson leaves, Savino questions Mia on what she did but… “a lady never tells.”

While somewhat predictable with the case, it was nice for this episode to reveal more of Katherine’s character.  From their chat we can gather that the two certainly have a close history, maybe even slightly romantic at some point.  Perhaps a young Ralph Lamb had a crush on the future ADA?  Or vice versa?  The episode also delivered some humor, showing us that Dixon is apparently petrified of spiders.  While not really relevant to the case, it was kind of cute.

“Masquerade” was unusually light on Savino’s side of the story, though what we saw helped to prove the man’s dedication to his casino.  It also set up future drama with the Sheriff showing almost-Mayor Grady the case files of men who had previously been associated with Savino — all dead, now.  Bluntly, Sheriff Lamb suggests that one of those files may be Grady’s one day.  Surely, this is leading up to something.

What did you think of this week’s Vegas?