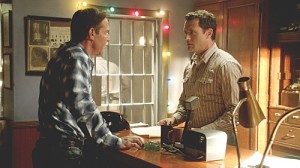 Vegas‘s Tuesday night fall finale was, in a word: excellent.  Not only did the episode showcase Sheriff Ralph Lamb’s detective skills — again — it bolstered each major character’s story.

One such story opened the episode — Jack’s.  As ‘Blue Christmas’ plays in the background we saw Jack cleaning out up his truck, inside and out complete with a wax job.  Ralph may tease his brother, but it’s clear to the audience that he’s looking to impress and clean up for Mia.  Mia, who is excited for her first Christmas with her father in years, as she tells Savino.  However, she’s in for a surprise when Johnny arrives back at The Savoy, engaged to singer Diane Desmond.  Jack, waiting across the street calls out to her after her father ditches their plans, and takes her out on a date — he even talks her into dancing with him.

Our murder this week is that of Del Merrick, part owner of a construction company.  In fact, it’s on a construction site that his body is found after it was dumped in a cement mixer.  Looks awfully like something of a mob hit, doesn’t it?  Especially after a worker confirms that the night before, while arguing with Merrick over being cheated on materials costs, Savino threatened the man’s life.  However, when Ralph and Jack speak to Savino, he explains that it wouldn’t be to his benefit to kill the man — he was working on a construction project for The Tumbleweed, Savino needed him.

The coroner summons Ralph and Jack to inform them of a wound across Merrick’s chest appearing to me months old.  According to the victim’s wife, the injury came from a crane accident, however, Ralph’s not buying it.  While looking through Merrick’s belongings, the two find a threatening letter that leads them to a janitor at a local university.  When they suggest the man could be responsible for Merrick’s death he tries to run, though is of course caught before revealing the reason for the letter.  Apparently, the man’s family had been sent to a Japanese-American internment camp that Merrick built and his daughter died because of the horrible living conditions.  Furious, the man sought Merrick out and slashed his chest, but the two ultimately forgave each other and he even drove Merrick to the hospital.

But, the woman described as picking him up — his wife according to the janitor — does not match the description of the woman Merrick was married to.

Of course, Ralph and Jack set out to find this mysterious girl, but it’s not until Yvonne suggests that they look into the jeweler who supplied Merrick’s gift to the woman.  The information takes them to an apartment where they find themselves under fire by the wife of yet another mobster.  The woman believes that her husband killed Merrick and now will be after her, and so, the boys take Nicky Tomisano into the station.  But just as Savino said, why would he kill the man when he needed his work?  In questioning Mrs. Tomisano, Jack discovers that Merrick apparently had quite the affinity for women and left her for another woman from the hospital.

Enter Amy Sieger, a female preacher who reveals that Merrick had been planning on dissolving his company after one last construction project — their new church.  Now, getting rid of the business would certainly change things for those in Merrick’s life — Ralph speaks to his wife about it while Jack speaks to Merrick’s business partner Peter Holm.  Both defend themselves, that they would never do such a thing, but Ralph and Jack have their own opinions — Ralph accuses the wife, Jack, the partner.  However, in the midst of this investigation Ralph caught onto Jack’s crush on Mia and advises him otherwise.  Yet, as nothing goes smoothly, and love knows no bounds, Jack is not willing to give her up, and the issue turns into a full-blown fight between the brothers with Jack implying that Ralph knows little about devoting his life to someone.  Because of their fight, it takes the two longer than it should to realize that Merrick’s wife and partner were in on the murder together, and even have coordinating wounds on their hands from dumping the man’s body.

The entire murder case of the episode runs parallel to the darker side of Diane that Savino gets wind of.  After Yvonne pushed work card applications through to Jack early on in the hour, they notice that Diane’s is one not approved — apparently she has federal narcotics charges in her past.  When the issue comes up between Savino, Diane, and her fiancÃ© Johnny, Diane claims that she can have it taken care of — and she does.  Savino turns to his friend the DA (who we haven’t seen in a while) who breaks the news of Diane’s in with the feds.  After all, how else can a singer get federal charges dropped with just a single phone call?  Her presence in The Savoy is a risk to Savino’s entire operation and Savino can’t help but question if her whole purpose is to expose them.   He enters her dressing room seemingly with the purpose of reigniting the flame of their affair, however, it becomes obvious that the wandering of his hands on her body have a more important purpose — to find a wire.  When none is found he tells her that he knows about her involvement with the FBI and he better not see her again.

But finding her dead, with a needle still in her arm?  I don’t think that’s quite what Savino imagined — and is it really a suicide?  Or did someone besides Savino find out what she was up to?

The episode also brought more of Dixon Lamb to the audience’s attention.  Early on in the episode Savino brings up a series of break-ins at The Savoy to Ralph, and the Sheriff promptly sets his son to investigate, though Dixon argues that he doesn’t want to.  And yet, he is quick to determine the cause of the break-ins, even suggesting that he should go undercover as a waiter to catch the guy.  When Savino mentions that he’s surprised, Dixon has been somewhat in the background in Las Vegas and people don’t even know he’s a deputy, Dixon agrees.  Dixon’s resentment of his father and their situation is further shown in Dixon’s hope for a Christmas party at the Sheriff’s station.  Seems harmless, but when Yvonne presses him on why he’s so attached to the idea, Dixon reveals that because of his father being gone, and losing his mother around the holidays, the Lambs have never really celebrated anything.

And of course, the episode was capped off with Jack’s visit to Mia.  Despite Mia’s protests that their relationship is dangerous, Jack is desperate not to lose her, and storms back into her room to the returning tune of “Blue Christmas” to kiss her, not caring at all what the consequences may be.  But theirs is not the only relationship seen in the final moments of the episode — we also see yet another precious Ralph/Katherine moment when the ADA brings him cookies and asks him to join her and friends out for drinks.  Of course, Ralph being the gruff sort that he is declines, but the flicker of romance between the two is unmistakable.

This was a great episode of Vegas with a lot of different facets.  Of course, we got a lovely subtle Christmas episode.  In a month where many shows go above and beyond with their holiday specials, I thought it was nice to see Vegas use it as more of a simple backdrop for the episode.  I don’t even think we saw a single Christmas tree, save the Savino family’s gold tree at the end of the episode.  It was also really great to see Savino and Lamb in somewhat similar situations, trying to protect their families.  Savino, of course, is so determined to get Diane to leave as she threatens not only his business, but his wife and daughters’ happiness, while Lamb tries to keep Dixon safe by pushing him away from the more direct police work.

I also loved how the writer’s gave more hints into the Lambs’ past, yet from points of view other than Ralph’s.  Taylor Handley did a great job portraying the subtle anger Dixon has towards his father, and even the longing of a little boy for some holiday cheer.  And it goes without saying that Jack and Ralph’s fight was a highlight of the episode – applause for Jason O’Mara and Dennis Quaid.  I know my heart hurt watching Jack throw the ranch and Ralph’s absence from his son’s life in his face.

I cannot stress how much I enjoy Vegas.  It’s delightfully different from other period dramas, so much so that I often forget that it actually is set in 1960.  The writer’s have turned out excellent scripts for this first run of episodes and the actors have just been killing it.  Am I the only one in love with Vegas?  What do you think?

And what can we expect come January?