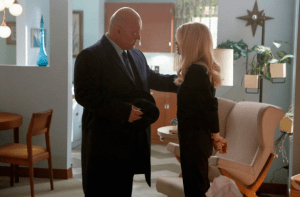 I’m fairly confidant in saying that tonight’s episode of Vegas was my favorite thus-far.  Directly following from last week’s drama of Jack shooting Johnny Rizzo, the episode carried the investigation with a quiet tension, while subplots ran parallel.

It’s always a sign of a good storyline when an episode begins with “Previously on [insert show here]” as Vegas did tonight.  The brief recap of Johnny’s issues with Jack helped to set the mood of Jack’s personal contention with the situation.  I have to say, Jason O’Mara did an excellent job in this episode, expressing a lot of emotion and conflict through mainly simple physical and facial acting.  It was quite interesting to watch Jack Lamb’s conflict in leaving the scene, then having to break the news to Mia and stand there as she declared her anger for whoever killed her father.  He pushes the line further when he then goes to Savino, accusing him of setting him up to kill Johnny.

Jack walked a fine line throughout this episode, as the titular ‘third man’ missing from the crime scene, withholding information from well, everyone.  He walks said crime scene with Ralph in what could be described as a state of numb-ness, freezes when the woman from the house’s (Myrna) boyfriend claims to have seen a white truck drive away, and seriously hesitates when Katherine asks for his fingerprints to compare to the crime scene.

We also saw Jack try to convince Mia to stay away from Savino, perhaps fearing that she could be next?  However, his most shocking act was within the last few moments of the episode, as he erases Myrna’s boyfriend’s name from his fingerprints, replacing it with his own, before distracting another deputy long enough for him to swap the prints with those going to the FBI Lab for comparison against the gun that killed Johnny.  The upset is clear on Jack’s face when Mia whispers to him in bed that he’s the only man she trusts.

Elsewhere in the hour, Dixon once again got to strut his stuff with a case, this time alongside his father.  After chasing down a stolen car, it turns out, Dixon knows the thief.  His friend, Pete, got into racing and stealing cars for extra money, but for what?  He won’t tell Dixon.  Dixon shows up to watch his friend drive under the impression that he’d meet the guy responsible for the stolen car ring (also looking like a man out of Grease), but ends up watching Pete’s car lock up, crashing into another.  But Dixon doesn’t buy that the accident was an accident, and investigates further to find out that the car’s steering column was drilled into.

Dixon, unsatisfied with how the case is looking for his friend goes to his home only to find it practically empty, a divorce petition from his wife on the table.  The signs point Dixon to believe that Pete wanted the money to prove he could provide for his daughter in a custody hearing, and goes to accuse his soon-to-be ex-wife of being involved.  Ralph, however, meanders outside to where Pete’s wife’s boyfriend is working on a car.  He talks him up, brings up him possibly knowing that Pete wouldn’t show for the custody hearing and comments on his power-drill.  As expected, the boyfriend turns on the Sheriff at the last second with a crowbar and the two fight it out.

Ultimately, sweetly, Pete does get custody of his daughter.

The episode also saw Savino go after an entertainment contractor who seemed to be stealing all of The Savoy’s entertainers for another club.  Did anyone else recognize singer Nicky Fontaine as John Lloyd Young of Jersey Boys?  In what could be very threatening from contractor, Tommy’s perspective, Savino takes him into an ally, nearly threatens the man’s life, and subsequently makes him The Savoy’s new entertainment director.  Somehow, I get the feeling this is not the end of this storyline.

Like I said, I think this may be my favorite episode of Vegas yet.  After half a season, this episode allowed the writers to open up the supporting characters of the show, let Jason O’Mara and Sarah Jones really do some acting, yet also helped to bolster the relationship between Ralph and his son.  We also got to see Katherine put herself in quite a precarious position by threatening Savino’s involvement with both Johnny’s murder and her investigation with the FBI.

Things on Vegas are more or less gaining some momentum, leading up to what is sure to be a high-intensity back-nine episodes.

Remember — there is no new Vegas next week due to the State of the Union address.

What did you think of tonight’s episode?